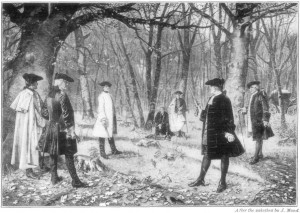 The duel between Aaron Burr and Alexander Hamilton took place in New Jersey in July 1804.

Aaron Burr, prior to his election as vice president of the United States under Thomas Jefferson, had compiled an impressive record. Many considered him a brilliant lawyer as well as an able and strikingly handsome politician. And during the Revolutionary War he had distinguished himself for bravery and leadership.

He made enemies, too. One of the most prominent was fellow New Yorker Alexander Hamilton, an equally ambitious man. Their courses seemed always to be crossing, stemming back to the time of the Revolution. 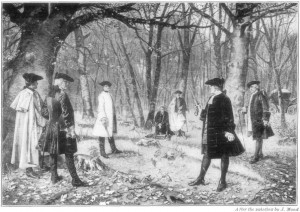 The duel between Aaron Burr and Alexander Hamilton took place in New Jersey in July 1804.

When Hamilton refused to publicly apologize for an alleged insult hurled at Burr in the heat of a New York gubernatorial campaign, Burr challenged him to a duel. The two met on a field in Weehawken, New Jersey, with their seconds, on the morning of July 11, 1804. After an exchange of shots, Hamilton fell mortally wounded, dying the next day. Though dueling was illegal in both New York and New Jersey, neither state tried Burr for murder.

Subsequently shunned in New York, and his political career in ruins after Jefferson dropped him as a running mate in the 1804 election, Burr turned his eyes and his ambition west — to the new territory of Louisiana and the vast holdings of New Spain.

Upon learning that Burr was rounding up men and munitions and allegedly using Blennerhassett Island on the Ohio River as a staging ground, Jefferson publicly accused him of seeking to “separate the western states from the Union.” Whether Aaron Burr actually committed treason is still an open question. President Jefferson had no doubts.

In 1806 a federal grand jury indicted Burr for treason, and in February 1807 federal marshals arrested Burr outside New Orleans. Under armed guard, the former vice president of the United States began a 1,000-mile trek on horseback to Richmond, Virginia, where he was to stand trial. 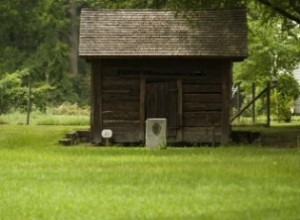 Made of hand-hewn logs, the Warthen jail in Washington County has been restored and is considered the oldest log jail in Georgia.

In early March he passed through Warthen, Georgia, where he spent the night in the Warthen jail. Reputedly the oldest in Georgia, it is still standing. On March 26 Burr reached Richmond, where he was tried and acquitted of all charges.

Fifty-eight years later, in 1865, Jefferson Davis, president of the Confederate States of America, retraced Burr’s path in the opposite direction, with federal soldiers in hot pursuit. He arrived in Warthen, intent on buying food for “beast and man,” and his party camped for the night in a secluded section of woods near the jail that had held Burr.

According to New Georgia Encyclopedia author Brian Brown, the “pursuit of Davis resulted largely from the U.S. War Department’s false assumption that he was complicit in the assassination of Lincoln. A $100,000 reward was promised for anyone who could bring in [Davis] and his aides.” Davis held hopes of escaping and establishing a new Confederate government in the western reaches of the Southern states.

A few days later, on May 10, federal soldiers overtook and arrested Davis in Irwin County, along with his wife, Varina, and their children, about 90 miles south of Warthen. Charged initially with complicity in the assassination of President Abraham Lincoln, Davis spent two years in prison at Fort Monroe before President Andrew Johnson released him to civilian custody.

In 1868 Johnson pardoned all who had participated in the Confederate rebellion, including the former president of the Confederacy. (The location where federal soldiers captured Davis is marked today by the Jefferson Davis Memorial Historic Site, which includes a museum and a thirteen-acre park.) 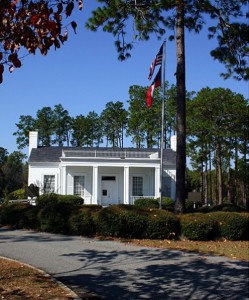 Confederate president Jefferson Davis by Union troops in Irwin County near the close of the Civil War in 1865. The location is marked today by the Jefferson Davis Memorial Historic Site.

What an unusual crossroads Warthen is. Sitting on historic Highway 15, midway between Interstates 20 and 16, not far from Sandersville, it is part of Washington County — reputedly the first in the nation to adopt Washington’s name while he was still a general. Like Burr and Davis, Washington, too, was charged with treason — by the British. As president he passed within 40 miles or so of Warthen on his southern tour of the United States in 1791, lodging for the night in Waynesboro. Surprisingly — or perhaps not — the county that lies between Waynesboro and Warthen is Jefferson, named after Burr’s nemesis.

Each man who passed this way, like a ship, was following his own destiny; each was a traitor (Washington much earlier, as general) to those who held power and who had the resources to punish him.

The dynamic tension between individuals and government structures is part of our national story. Each of us is capable of actions that can threaten, damage, or improve government. Whether an individual’s motives are ill conceived or worthy sometimes is a matter of perspective. History becomes a record of the consequences. Let us learn from history and also never forget the contributions that each of us makes to its unfolding course.