FDR — the face of the New Deal in Ga

The "healing waters" at Warm Springs were beneficial to Franklin Roosevelt.

When the Great Depression hit Georgia in the late 1920s, most of its population barely noticed, given that the state’s own economy still suffered from the ruin of the Civil War.

Sharecropping had become a way of life for many farmers, black and white. In addition to poverty and the plague of pellagra, there were also massive agricultural impediments due to large-scale land erosion, resulting from long-standing poor farming practices. 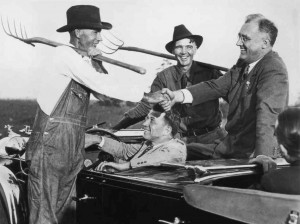 And then there was the other kind of plague, that of a cash-crop economy, cotton, making practically everyone dependent on the erratic swings of market prices and the weather, a situation that worsened when the boll weevil came.

Franklin Roosevelt understood all of this, because he lived on the land in rural Georgia and built a home in Warm Springs, the only one he would ever build for himself.

Depression and desperation brought on by polio led him to Warm Springs in 1924 to try the “healing waters” of a resort owned by his friend George Foster Peabody, of Columbus, Georgia. Only Roosevelt himself can know what exactly transpired in his mind, but the result of the water treatment was nothing less than a new lease on life.

Warm Springs, henceforth, became the home of his heart.

He loved traveling the backcountry roads in his specially equipped car and meeting farmers working the land. From this, he learned firsthand of Georgia’s problems, and he sought to understand their causes. He embarked on a self-education program, helped along by his friend and neighbor, Cason Callaway, who had experimented on his own land by employing modern agricultural practices of diversification and crop rotation.

When Roosevelt became president in 1933, Georgia remained an imprint in his mind of what ailed the nation—and what many in the nation needed: rural electrification, modern agricultural practices, education access, improved public health, and jobs.

The “healing waters” at Warm Springs were beneficial to Franklin Roosevelt.

The programs of the New Deal responded to the social crisis of the Great Depression. We know that only the Second World War would pull the nation out of its virtual economic collapse, but Roosevelt’s energy, his incantation that “the only thing we have to fear is fear itself,” restored the nation’s ailing spirit, put millions to work, propped up farmers, and set new standards for minimum wage and hours requirements.

Although many welcomed the financial investment in the South’s economy, some of Georgia’s politicians in the 1930s actively campaigned against the New Deal programs as contrary to “our way of life.” Factory and mill owners especially worried about the impact of wage-and-hour regulation.

And because his New Deal policies of support for labor unions and black workers and their families met intractable opposition from political leaders like Georgia governor Eugene Talmadge, Roosevelt moderated his position. As New Georgia Encyclopedia author Kaye Minchew points out, such resistance to parts of the New Deal was hardly unique to Georgia, as Jim Crow had long since lodged itself in the law and constitutions of all the southern states.

In hindsight, what is extraordinary about Roosevelt in Georgia is how much support of the general mass of the voting population he retained.

Roosevelt won Georgia by generous margins in all four of his presidential elections—even as these same voters supported politicians at odds with his policies. He traveled and spoke around the state, and set up his philanthropic polio foundation in Warm Springs. His funeral train’s procession gathered masses of supporters at every station it passed through in Georgia in 1945.

As president, it was Roosevelt who led an isolationist nation into preparation for war. It is hard to imagine any other politician of the time doing so. After Pearl Harbor, the nation’s path was set. It was his leadership of the Allied coalition that ensured the outcome of the war.

One might ask, what if Roosevelt had never ventured to Georgia in 1924? What would have happened to him? Would he have received the healing he so desperately needed? Would he have ever experienced firsthand the trials thrust upon hard-working, but poor, people by circumstances beyond their control?

If he had not learned about the sufferings of Georgians by listening to those he met on trips around the countryside, could he have truly grasped the extent of personal suffering the Great Depression was causing nationwide?

Would he have emerged from his polio strong enough and wise enough to take on the problems of this country and then to take it out of isolation into an all-consuming war that was necessary in hindsight?

Just as he emerged from the isolation of his illness and learned to engage with the world again, as Warm Springs had allowed him to do, Roosevelt as president helped lead the country out of its isolation into a worthy fight.

Without U.S. involvement in the war, what would have happened to the world?

When I visit Warm Springs today and gaze upon the preserved healing pool that brought Roosevelt here, it is with an awesome appreciation that I am also stepping into sacred civic space.

To Warm Springs I say, the free world forever is in your debt.