The Okefenokee, Folkston’s Funnel, and Other Wonders of Georgia 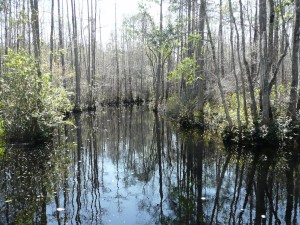 Not long ago my wife and I visited the great Okefenokee National Wildlife Refuge. Somehow, in our 15 years in Georgia, we had missed this spot, though it had always been on our must-see list. We read up on the surrounding countryside and the largest blackwater swamp in North America in the New Georgia Encyclopedia and the Georgia Humanities Council’s New Georgia Guide (University of Georgia Press). 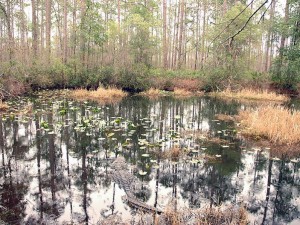 Covering about 700 square miles, the Okefenokee Swamp is the largest in North America. Credit: Georgia Department of Economic Development

Mountains and beaches tend to be more familiar, accessible terrain for most of us, while a swamp rightly conjures up the idea of a forbidding place where we need special skills or guides to help us penetrate its full beauty. Indeed, there is something otherworldly about a land that is neither completely dry nor wet.

The name okefenokee comes to us from the native inhabitants who lived on the land, Creeks and Seminoles, and means “land of the trembling earth.” It is best to explore this world via boat, preferably canoe, to avoid surprising the abundance of wildlife. A veritable paradise of habitats, mammals, reptiles, fish, and plant life are part of an astounding natural wonder unlike any other in North America.

According to New Georgia Encyclopedia author Whit Gibbons, “Virtually all species of wading birds and waterfowl native to the Southeast can be found in the Okefenokee in some season.” 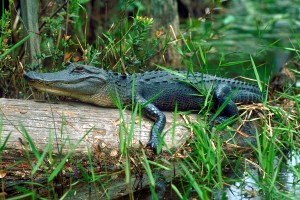 The American alligator is one of the most ecologically dominant species in the Okefenokee Swamp.

While the wonder of nature is what comes to mind when one hears of this great swamp, industry and commerce play an important part in its heritage, too. On the southeast boundary of the swamp, in Charlton County, lies the town of Folkston. The community traces its beginnings to the arrival of the railroads in the 1870s. With the trains also came the sawmill and turpentine industries. Beginning in 1910, and for the next twenty-five years, owners purchased parcels of the swamp from the state of Georgia, then set about harvesting thousands of cypress, pine, and red bay trees, among the oldest and largest of their kind in the United States.

In 1937 in response to the efforts of conservationists — and echoing his distant great-cousin Theodore Roosevelt, who founded the national park system — Franklin D. Roosevelt issued an executive order making about 80 percent of the Okefenokee a nature preserve “for future generations.” (The federal government purchased the property from its owners).

An all-black battalion of the New Deal’s Civilian Conservation Corps built roadways and facilities for tourists that are still used in the refuge today.

The town of Folkston and residents of Charlton County recently experienced another episode of development. Commercially valuable titanium deposits abound in the land bordering the Okefenokee Wildlife Refuge — land owned by the DuPont Company.

In the mid-90s, when DuPont announced plans for a strip-mining operation, concerned residents of Charlton County launched a vigorous and highly publicized protest. DuPont eventually abandoned its plans. In what is believed to be the “largest land preservation gift in Georgia history,” according to New Georgia Encyclopedia author Elizabeth Cooksey, DuPont donated 16,000 acres of its property to the people of Georgia. 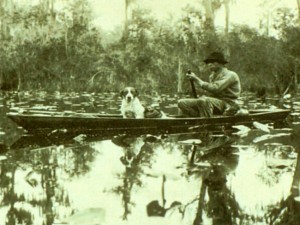 And now back to the rest of the story.

We chose Folkston as our entry point into the swamp. Somewhere in our excursion past cypress trees, floating islands of peat moss and water lilies, a swamp insect or spider bit me. The next day my hand swelled. After a consultation with a refuge staff member, it became time for a visit to the Folkston emergency room.

A long-time Folkston native admitted me, telling us more about the local history as we waited for the physician, who turned out to be from Nigeria. As he tended to my bite, we chatted about the differences between spiders of Nigeria and Georgia. Here was a reminder that the United States, including its more remote and rural corners, remains a haven of opportunity that beckons across the globe.

Another reminder came to mind: the night before, we’d eaten in a Thai restaurant on Main Street, a town favorite recommended by staffers at the swamp. The owners were still learning to speak English as they were putting roots down in the community.

The new next to the old: a block away from the restaurant, the railroad tracks cross Main Street on a roadbed laid a century and a half ago. And nearby is a popular viewing platform, for Folkston is famous for its double-track “funnel” connecting Florida with Maine and points west. Every twelve minutes gates with clanging bells lower, heralding the passage of yet another train.

The Okefenokee, North America’s most impressive swamp, is remote and otherworldly, and at the same time a tangible gift to those who choose to live and work on its edges. Here, eons of ecology intermingle with steel rails, far-flung markets, global trade, the tourist industry, immigration, conservation efforts, and a bustling local life that retains an authentic dignity conferred by time alone.