‘Woke up this morning with my mind on freedom’: the civil rights crusade has been a long time coming 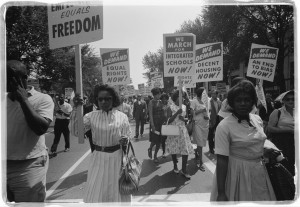 It is difficult for many born after 1965 to imagine what life was like in the South before the “freedom movement,” which is exactly what the civil rights crusade was. 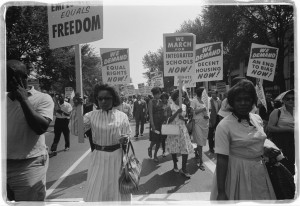 Before the Civil Rights Act of 1964 and the Voting Rights Act of 1965, a mere fifty years ago, life in the segregated South was risky, even fatal, for those who crossed the line of racial mores engraved in law and social customs.

Felt by everyone and in every dimension of life, the danger of disregarding segregation affected persons of all color, gender, and age. Any attempt at change to this bedrock of social order, from any quarter, by anyone, became a threat to the South’s way of life and was immediately responded to.

Still, this pervasive reality did not prevent people and organizations from making the effort, some paying the ultimate price, others enduring personal and life-altering sacrifices.

A fact often overlooked, what we know as the civil rights movement was “a long time coming,” to borrow a phrase from the great Sam Cooke, with roots preceding the American Revolution and enlivened by the hope of that freedom struggle. 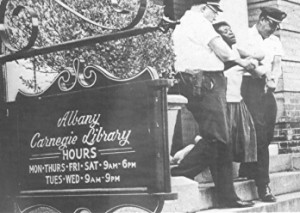 A woman is arrested for violating Jim Crow laws at the segregated Albany Carnegie Library.

The “movement” over the past two centuries was both formal and informal, taking place above and beneath the surface of society. It included not only political acts and public stands but also the quiet and sometimes intensely personal deeds of so many — white, black, Hispanic, Asian, native American — whose actions and relationships “crossed the color line” to affirm the truth of our common humanity. We will never truly know the names of so many of these quiet heroes, those who “lived” the movement in their daily lives and planted seeds of change. Each act constitutes a foundation stone in the long road to freedom and equality.

By the power of their very public examples, the movement also included those men and women of color throughout the 20th century who soared in academe, the arts, the ministry, business, science, journalism, sports, law, and literature. The record of achievement of so many, battling the formidable obstacles thrown in their way, is absolutely breathtaking.

Soon, Atlanta will be home to the National Center for Civil and Human Rights, its opening scheduled for later this month. It will be an occasion for remembrance, an opportunity to cast our minds back to see the distance traveled and the distance yet to go. This new center will help underscore that the freedom movement is a worldwide phenomena still unfolding, and also one that the United States has a special responsibility for.

Next week, to commemorate the opening of the National Center for Civil and Human Rights, I will begin an occasional series of civil rights–related stories. The first in the series will be the Albany Movement and the formation of that community’s Freedom Singers. A 1961 assemblage of college students and Student Nonviolent Coordinating Committee (SNCC) volunteers who drew their strength from prayer and song, the Freedom Singers did nothing less than help power a national movement.