12-acre site near Falcons stadium up for redevelopment

By Maria Saporta
Published in the Atlanta Business Chronicle on April 17, 2015

The Atlanta Housing Authority is hoping to ride the wave of revitalization near the new Atlanta Falcons stadium by seeking the interest of developers in the 12.4-acre site of the former Herndon Homes.

The authority has issued a request for qualifications seeking a “visionary master development partner” to turn the now-vacant property into a “vibrant, urban development with a mix of uses including office, retail, entertainment and mixed-income residential,” according to the agency.

The site is less than a mile from the new $1.5 billion Atlanta Falcons stadium, and it sits between four major anchor institutions — the Georgia World Congress Center to the south; Georgia Tech and The Coca-Cola Co. to its north and east; and Antioch Baptist Church to its west. The property also is adjacent to the North Yards Business Park.

At one time, the site was being considered as the “north site” location for the new Falcons stadium before the “south site” option was selected next to the existing Georgia Dome.

Despite those major anchor institutions around the property, the area feels void of activity, a situation that AHA hopes it can help change. 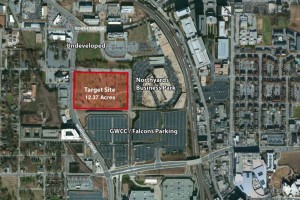 This is the site plan of the Herndon Homes property that the Atlanta Housing Authority is now receiving Requests for Qualifications (Source: AHA)

“It’s a beautiful site, and it’s in an area that can be a catalyst for the revitalization that will come with the new stadium,” said Joy Fitzgerald, AHA’s interim president and CEO.

Interested developers will have until June 16th to submit their qualifications to the authority, according to Trisha O’Connell, AHA’s vice president of real estate development.

“We will then have a short list of developers and issue a request for proposals to get their vision for the site,” O’Connell said.

Once it has received and reviewed the proposals, AHA likely will select its development partner sometime in the fourth quarter.

“We believe we will be able to attract the kind of developers that this site warrants,” O’Connell said. “As we do our master plan, perhaps what we are doing will spur other development. We are the first party at the table.”

One person who is closely following the process at AHA is Kevin Byrne, president of The University Financing Foundation (TUFF). Byrne has been involved with the Brookings Institution’s development of the concept of “Innovation Districts,” including the one at Georgia Tech.

“The core of any innovation district is people, and the only way to drive people to a place is the whole live, work and play environment,” Byrne said. “We embrace the redevelopment of AHA’s Herndon Homes site because it can be a place where professors, students and staff at Georgia Tech can live.”

Given AHA’s dedication to building mixed-income communities, Byrne said it also can become a thriving retail and business district.

“We see that as a great catalyst that will make that area just like Tech Square that has a book store, a coffee shop, a conference center and kids in flipflops,” he said. “This Herndon Homes site has the opportunity to do that. It makes sense, and it can be complementary to everything that Tech has done.”

The Herndon Homes development was named after Atlanta’s first African-American millionaire, Alonzo Herndon. It was built in 1941, and it had a total of 496 units. Part of the development had been built on a landfill, but Fitzgerald said the property had been remediated by the state’s Environmental Protection Division about 15 years ago.

A portion of the Herndon Homes property was acquired by the Georgia World Congress Center a few years ago, and it is being used for parking.

Although the Herndon Homes housing project was largely demolished in 2010, AHA waited until now to put it on the market because of all the real estate interest on the Northside corridor and the westside communities of English Avenue and Vine City.

“We are so excited about the opportunity for this 12-acre site to be a place for families to live, work and play,” O’Connell said. “This is a great site for some real vision, creativity and partnership.”