I was so sad to hear about Monday’s passing of James E. Young, president and CEO of Citizens Trust Bank.

Young had been a strong behind-the-scenes player in the Atlanta business community — translating his rich experience in the banking and financial world into the city’s civic sector.

It was always a pleasure to see Young in action, and it was even more of a pleasure to hear about how he used his influence behind closed doors.

One of the last times I saw him was after a board meeting of the Commerce Club when Atlanta Mayor Kasim Reed was the guest speaker during the closed session. Several people told me later that it was Young who had had the courage to ask the mayor the hard questions — all asked in a gracious way.

That was Jim Young, someone who had been a keen understanding of what it means to be a leader.

The most impressive time that I saw Young at work was when there was a deep division on his Citizens Trust board. One group was led by Atlanta power house Herman Russell, who in some people’s minds represented the old guard. And the other group was led by Gregory Baranco, who some viewed as the newer, younger guard.

The showdown came at one of the bank’s annual meetings (I think it was 2003). The leadership of Russell, the bank’s top shareholder, was being challenged by Baranco, the bank’s vice chairman who also was a major shareholder. Russell won. 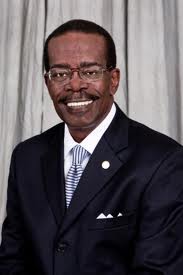 But all eyes were on Young when it was time for him to address shareholders during that emotionally-charged meeting.

Young became quite philosophical. He spoke of how natural it is to have the ebbs and flows of leadership. When birds are flying in a “V” formation, different birds take over the lead position, and when that bird gets tired, another bird takes over that lead spot. That is what keeps a flock flying towards where it wants to go.

Discussing local issues with Young was always enlightening. I remember hearing of his frustration that Citizens Trust, an African-American financial institution, could not get access inside some of Atlanta’s top corporations. He was genuinely disappointed that Atlanta did not have a more integrated economy.

He and I would have long conversations about MARTA, an issue that he deeply cared about. But when I told him he should join the MARTA board, he would brush it off. Interestingly enough, today the chair of MARTA’s board is Frederick Daniels, executive vice president of Citizens Trust Bank.

Young also was the first to tell me to keep an eye on Cynthia Day, the bank’s chief operating officer. He said she was one of the strongest women executives in Atlanta. Today, following Young’s brief battle with cancer, she is now the bank’s president and CEO.

At 62, Young was literally too young to die.

Young’s death also was hauntingly similar to the death of Ronald Brown, who passed away in 2008 when he was CEO of Atlanta Life Financial Group. Brown, who was only 54, also had passed away after a brief illness. Both men, stewards of historic African-American businesses in Atlanta, had so much more they could have offered our community.

They are missed, and they will continue to be missed.