On the north side of Memorial Drive downtown is the Atlanta city jail, officially known as the Atlanta Department of Corrections. It’s a building that houses broken laws and crippled lives

And on the south side of the street is Welcome House — a perfectly-named place where people are encouraged to rebuild their lives. 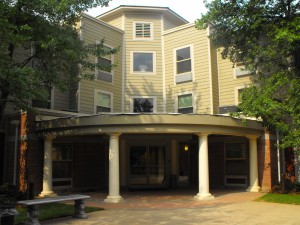 None of that symbolism is lost on Samuel, who has been a resident of the Welcome House since 2006 after being incarcerated for 20 years.

Looking up at the city jail, Samuel said: “I wanted it to be the last thing I saw before I went to bed and the first thing I saw when I woke up.”

And then he put himself in the place of those living in one of the cells across the street.

“If you are on that side of the fence and looking here, this is a goal,” said Samuel, who did not want to share his last name.

That’s the Welcome House, a single-room occupancy residence that houses 209 people who are putting their lives back together.

And this was a day of celebration. The Welcome House, which originally opened in 1993, has just undergone a $12 million renovation to environmental Earthcraft standards.

The grand opening (actually the Welcome House never closed during its year of renovation) took place Thursday afternoon with balloons, cake, lemonade and plenty of smiles.

“There’s bad story after bad story about banking and housing,” said Bruce Gunter, president and CEO of Progressive Redevelopment Inc., which developed the Welcome House. “Here we are with a great story. This was a true partnership if there ever was one.”

An historic photo was on display behind the podium. It showed a younger, more innocent–looking Gunter standing next to then-Mayor Maynard Jackson. It was 1992, and they were standing in front of the old Imperial Hotel, which later became another SRO.

“It’s a very poignant photograph,” remarked Gunter, who then admitted that there was a not-so-innocent story behind the photo (something about social activism and civil disobedience). “Back in the early 1990s, homelessness was just starting to be an issue in major cities including Atlanta. One of the first tangible projects that the city sponsored was Welcome House.”

Former Atlanta City Councilwoman Debi Starnes, who is now a policy advisor for Atlanta Mayor Shirley Franklin, mentioned all the obstacles that exist to develop transitional housing for people who are trying to get back on their feet.

“There are 10 reasons why it’s impossible to get this done,” Starnes said. “A sane person would not even try to begin such an effort.”

And yet the Welcome House stands as evidence that the impossible can be overcome.

For Samuel, the Welcome House has really been a life-saver and life-builder.

He stands tall, proudly sharing a warm smile as he shows visitors the refurbished residence. There is the attractive new patio; the energy efficient features; the new kitchens; the new computer lab and library; the comfortable common room with a flat-screen television; and a new garden where residents can grow their own food.

Before landing at Welcome House, Samuel said it had been impossible for him to find housing because of his crimminal past. The Welcome House gave him the stability to get one job, and then a better one, and then one that was better than the last.

Now Samuel works at the downtown Ritz-Carlton, a healthy walk from the Welcome House. He’s a block away from a MARTA station, so he doesn’t need to own a car. He’s been saving his money, even though he pays $420 a month for his room including utilities, with hopes of eventually moving to his own place.

“It’s all because I had a place to lay my head,” Samuel said. “I just hope I can stay here a couple of more years.”

And then he remembered how many other people also need places to stay; people who have not been as fortunate as he has in getting a room at the Welcome House.

And one day he hopes there will be more people living in transitional residences like the Welcome House than prisoners living in jail cells.

Previous Article
14th Street bridge: hard to build new roads in cities
Next Article
This Land is Our Land: Seeking Diversity in the Great Outdoors