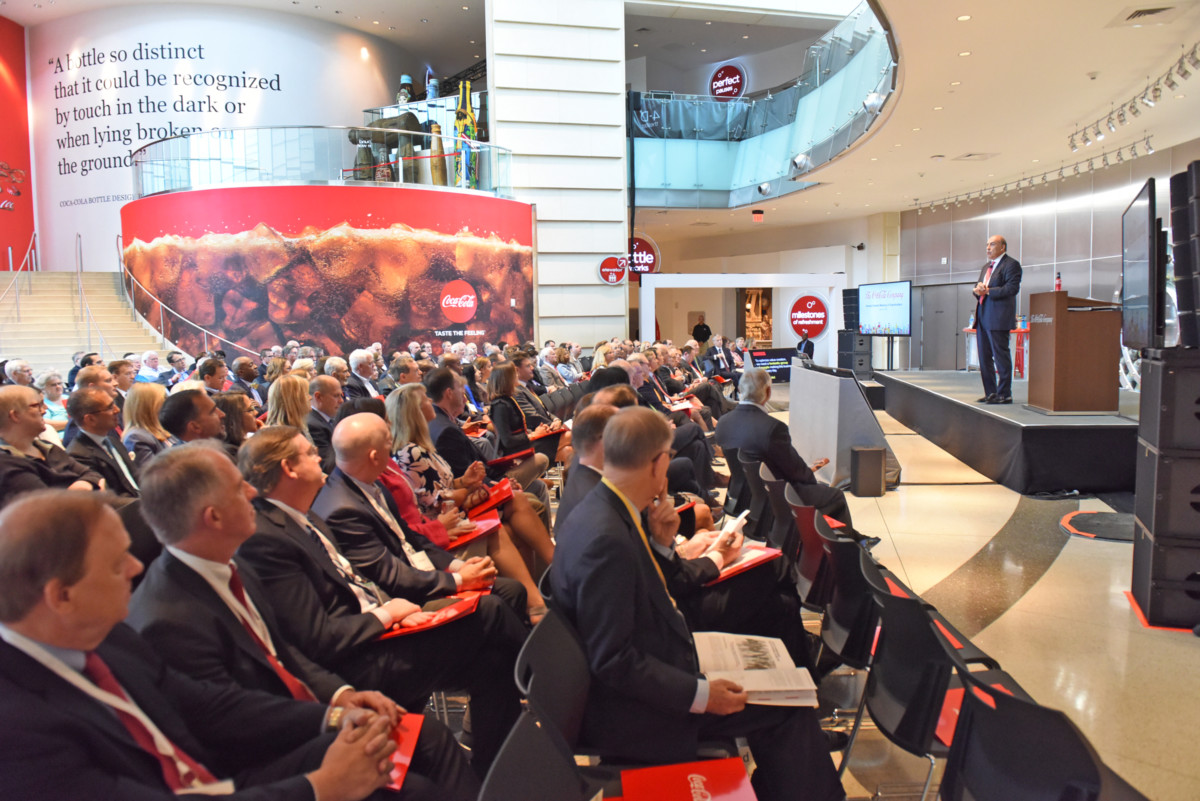 Coca-Cola shareholders gather at the World of Coke of the 2018 annual meeting (Photo by Michael Pugh for the Coca-Cola Co.)

The Coca-Cola Co.’s  2018 annual meeting of shareholders at the World of Coke was one of the tamest in the company recent history.

There was no one shouting “Killer Coke.” There were no protesters out in front. There were no angry vocal shareholders. There were no combative exchanges with executives. And no one had to be forcefully removed from the meeting.

Instead, the optics showed a united management team of Muhtar Kent, the chairman and former CEO, and James Quincey, who will mark his first anniversary as the company’s president and CEO on May 1. 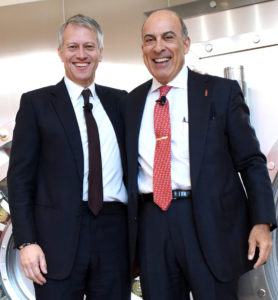 “James has hit the ground running,” Kent said of the CEO transition. “I’m committed to supporting him in every way I can.”

At the end of the meeting two longtime Atlanta directors – Ron Allen and Sam Nunn – spoke of the transition.

“This is probably the smoothest transition I’ve seen,” said Allen, who joined the board in 1991 when he was CEO of Delta Air Lines. “And I’ve seen lots of transitions.”

He said the team of Kent and Quincey reminded him of a previous Coca-Cola management duo – the late Roberto Goizueta and the late Don Keough – of 25 years ago.

“The board is very pleased with the teamwork we are seeing right now,” Allen said. “We’d like to see it for a long time.”

Nunn, who has been Coca-Cola’s lead independent director since 2014, also sounded enthusiastic – especially over the positive first quarter earnings that were released the day before the April 25thannual meeting.

“The quarterly report shows tremendous progress,” Nunn said. “I think James is doing a terrific job. Muhtar and James make a great team. I’m very optimistic that the restructuring over the last four or five years, which has cost the company a bit of money, is beginning to pay off.”

Asked how long Kent would remain as chairman, Nunn said: “We will cross that bridge when we get to it. Right now, we are happy with where things are.”

During his opening statements, Kent singled out two Atlanta-owned restaurant chains for their relationship with Coca-Cola – the Varsity and Arby’s.

“The Varsity – we’ve been growing together with the Varsity for the last 90 years. The famed drive-in was founded by Frank Gordy,” Kent said. “Arby’s, in 2017, they made a critical decision to shift to Coca-Cola.”

He then recognized Varsity’s president, Gordy Muir, and Paul Brown, CEO of Inspire Brands who negotiated the deal when he was CEO of Arby’s

About a dozen shareholders did ask questions of the company’s executives.

Jack Arogeti, an Atlanta native, asked why the board had grown from 10 directors in 2000 to 16 today.

Two new directors were elected at the 2018 annual meeting – Christopher Davis, who is CEO of an investment advisory firm; and Caroline Tsay, CEO of Compute Software. At 36, Tsay is now the youngest Coca-Cola director and at least 15 years younger than the other directors.

“There is no right number,” Kent said of the number of directors. “It’s a constant evolution. In the last few years, there have been 10 new directors… The average tenure has gone down from double digits to single digits.”

Quincey said the company is continuing its efforts to respond to changing customer desires in the 207 countries where its products are sold. The company has gone from having one original product to 3,500 products around the world.

For example, in Japan, the company is experimenting with a low-alcohol product. 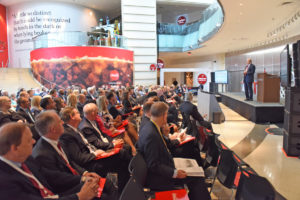 Coca-Cola shareholders gather at the World of Coke of the 2018 annual meeting (Photo by Michael Pugh for the Coca-Cola Co.)

One shareholder asked if the company might introduce alcoholic beverages in the United States.

“We don’t rule things out,” Quincey said. “But alcohol in the United States is on the unlikely end of the spectrum.”

The price of Coke shares also came up.

“If you look at stock price excluding the dividend, the stock price is where it was five years ago,” shareholder Daniel Conway said, adding whether the company would be open to more mergers and acquisitions. “Do you need to be more aggressive?”

“It is a long-term value creation model that’s working for us,” Kent answered.

Quincey added there are other factors that influence the stock price.

“As we make more than 75 percent of our profit outside of the United States, we are exposed to the exchange rate and the strong dollar,” he said, adding the dollar has been strong in recent years. “Over the long-term, that washes out comfortably.”

Another shareowner asked about Coca-Cola’s exposure in the growing trade frictions between the United States and other countries.

“Volatility is the name of the game,” Kent said. “That’s the environment we find ourselves in. We control what we can and keep moving forward… It is not as benign as it was two years ago. I wish I know what the next month or two or three will tell us about the trade environment.”