Last year, Zoo Atlanta and partners published 16 peer-reviewed papers, tackling subjects like the functions of an elephant trunk and assembling the genome of a critically endangered species. (Photo courtesy of Zoo Atlanta.)

2022 was an instrumental year for Zoo Atlanta’s research team, spearheading studies that change the way scientists and wildlife experts understand different species — ranging from mammals to reptiles — and inform best ways to care for and protect the animals.

As part of its mission to save wildlife and their habitats, Zoo Atlanta is dedicated to animal research, which requires a mixture of curiosity and close observation. Many of these efforts are headed by Director of Research Joe Mendelson, a herpetology expert who has named more than 40 new amphibian and reptile species. Last year, the team and partners published 16 peer-reviewed papers in total. 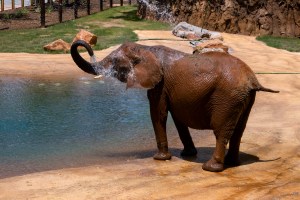 Kelly, one of three elephants at the Zoo, was the main subject for the study. (Photo courtesy of Zoo Atlanta.)

One 2022 study, conducted in partnership with a Georgia Tech engineering student, focused on the mechanics of the skin wrinkles and folds in elephant trunks. When offering elephants a taste of their favorite treat, the team watched their trunks expand an additional three feet. The study was published in the National Academy of Sciences, a highly prestigious journal.

“No other vertebrate animal can do anything like that,” Mendelson said. “That only happens in worms, octopus and squid … and that’s because they don’t have bones. Quite literally everything we know about that came from this graduate student. And based primarily on Kelly the elephant — everyone’s favorite elephant here at Zoo Atlanta.”

In another breakthrough last year, the team partnered with a Georgia Tech graduate student in the genomics lab to assemble the genome of the critically endangered Guatemalan beaded lizard. The genome is a sequence of nucleic acids in DNA that, as Mendelson puts it, “is the blueprint for how that animal functions.” 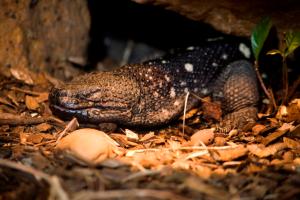 As one of the most endangered lizard species, there are an estimated 500 to 600 mature Guatemalan beaded lizards in the wild. (Photo courtesy of Zoo Atlanta.)

This type of work has only been done with a handful of lizard species, Mendelson explained, because it’s time intensive and expensive. But, the findings can prove to be revolutionary.

There are five species of beaded lizards, but only the Guatemalan population is critically endangered. Using information gathered from their genome, the research team was able to learn more about the genetic history of the species and why they are struggling today.

“We found the history of populational ups and downs in this species over millennia. The [marker] of what happened to that species, on their way to becoming critically endangered, is all in that genome,” Mendelson said. “We’ve been heavily invested in this conservation program for this lizard, and now we know much more about its history.”

Many of these research projects rely on the collaboration of experts and students across multiple fields. Hoping to encourage others to do the same, Mendelson helped craft a guide for successful research collaborations between zoos and educational institutions.

“It’s kind of frustrating to look around the world and realize zoos and universities are not playing together as well as we do here in Atlanta,” Mendelson said. “We wrote a paper saying, ‘You’re a zoo, you’re a university and you’re on the opposite sides of the same town — you guys should be playing together because great things can come out of it.”

Heading into 2023, several projects are top-of-mind, including an unknown virus that threatens snakes.

“We’re on the trail of a virus that nobody knew existed,” Mendelson said. “How serious is it? We don’t know. Can it kill snakes? We now know that it can. But the truth is, we know nothing about it. That’s going to be developed over 2023/24 and will involve fieldwork and careful monitoring of our own populations at the Zoo.”

Ultimately, Mendelson believes that accredited zoos should be active participants in learning more about wildlife and, on a larger scope, our world.

“I can’t overemphasize this. The more we know about [animals], from their internal organs to their cognitive abilities in their brain, the better we can care [for] them, the better we can conserve them,” he said. “And let’s get a little more philosophical for a second — the core of what research and science are about is understanding the world. Let’s better understand them just for the sheer sake of knowledge.”