Upon receiving the 2022 Four Pillars Tribute on Oct. 10 from the Council for Quality Growth, Carol Tomé laughingly said: “Today, brown is the new orange.”

Tomé is CEO of UPS, Atlanta’s second-largest Fortune 500 company, a role she has had since June 2020. The company is known for its brown vehicles and brown uniforms.

But before joining UPS, Tomé spent 24 years, from 1995 to 2019, at the Home Depot, a company branded by the color orange, and its frontline associates wear orange aprons.

Tomé’s statement, however, was much more profound. 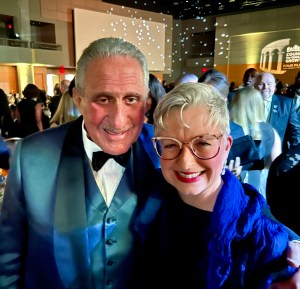 Arthur Blank with Carol Tomé at the 2022 Four Pillars event on Oct. 20. (Photo by Maria Saporta.)

In her leadership at UPS, Tomé has carried over the lessons she learned and the culture she adopted working for the founders of Home Depot – Arthur Blank and Bernie Marcus, as well as subsequent CEOs Frank Blake, Craig Menear and Ted Decker, who she had hired when she was the company’s chief financial officer.

The Four Pillars tribute is one of the most prestigious given in metro Atlanta. The event at the Georgia World Congress Center with 1,200 attendees was a melding of colors and cultures that exemplified Tomé’s leadership attributes.

So, it is not surprising to see how Tomé has adapted her Home Depot values and applied them at UPS.

For example, Home Depot operates with an inverted pyramid. At the top of the pyramid are the associates who interface with customers. At the bottom are the executives. Home Depot required all executives — including board members — to wear orange aprons and work on the floors regularly so they could truly be part of the customer experience.

When Tomé started working at UPS, she instinctively wanted to experience the front lines. 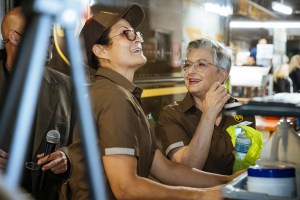 “Most of our employees are governed by some sort of a collective bargaining agreement, and there are rules,” Tomé said in a 15-minute interview in the green room before the program.  “As you would appreciate, management is really not supposed to touch packages because it could be perceived as taking work away from one of our unionized workers. Well, I like to touch.”

So, when she was in Ontario, she said she wanted to unload a truck, which she did.

“It was a really great experience,” Tomé said. “But I had a Teamster who didn’t think that was a good idea.”

The Teamster threatened to file a grievance, so Tomé promised she wouldn’t do that again. But there are no similar rules for “helpers.” So, last Christmas, Tomé spent a day delivering packages wearing a brown uniform.

Arthur Blank remembered Tomé first being reluctant to work in the stores and wear an apron. But that quickly changed.

“She worked every department,” Blank said. That’s when her career really took off.”

Blake remembered that during earnings calls, everyone would wear an orange apron. Tomé’s apron, however, included Home Depot’s value wheel.

“I knew from that first moment that Carol was someone who took her values seriously,” Blake said. 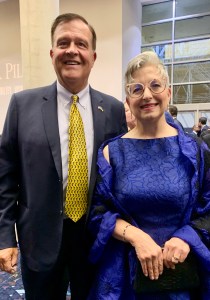 At the Four Pillars reception, Carol Tomé poses for a photo with Gwinnett businessman Emory Morsberger. (Photo by Kelly Jordan.)

Before taking the UPS job, Tomé visited with Kurt Kuehn, former CFO of UPS with whom she had worked closely as a UPS board member since 2003 and as a fellow CFO. Tomé told him she was concerned she would not be accepted in the culture of UPS. Kuehn assured her that her blood was as brown as all the other UPSers.

“She’s been able to stir things up at UPS a little bit,” Kuehn joked. “She’s made some startling changes… Employees can bring their authentic selves to work. There are now UPSers with beards and even tattoos. The place has gone to hell. It takes courage to drive change.”

David Abney, who preceded Tomé as CEO, had planned a gradual transition. But then the Covid pandemic hit, and there was the murder of George Floyd.

“She was brand new as CEO of UPS,” Abney said “But one of the first things she tackled was social unrest and social injustice. She said: ‘None of us are safe until all of us are safe.’”

Atlanta Mayor Andre Dickens described Tomé as a servant leader. “She believes, as I do, that we can become that shining city on a hill,” he said.

In 1995, Virginia Hepner remembered meeting Tomé when had just joined Home Depot. Hepner was then a banker at Wachovia and she was the bank’s lead on the Home Depot account. Hepner made a presentation for Tomé, and then realized Tomé already had put together a folder with all the relevant information.

“Lesson No. 1, Carol is always prepared,” said Hepner, former CEO of the Woodruff Arts Center, who became close friends with Tomé and her husband Ramon through their mutual love of the arts. 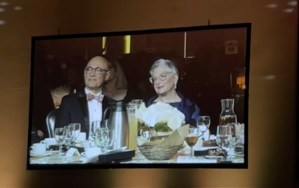 Ramon and Carol Tomé featured on the big screen during the Four Pillars event. (Image captured by Maria Saporta.)

During the pre-event interview, Tomé said that after two-plus years as CEO, she has learned to fully appreciate the tenacity of UPS employees. During the pandemic, UPSers didn’t have the luxury to work from home. They had to continue to deliver packages to more than 220 countries and territories around the globe.

“What I learned — it really doesn’t matter what comes our way. We’ll get through it,” Tomé said. “Instead, we’re going to look at it through the lens of opportunity. Our people, there’s a bounce in their step.”

Part of it is developing individualized work schedules for drivers and managers, no longer scheduling them to work six days a week.

“We’ve been able to give them back time,” said Tomé, who added that some drivers actually like working overtime, so UPS worked with each of them to get a schedule they wanted. “This is painstaking work, but it’s really important,” she said.

But Tomé once again stopped short of saying she was having fun.

“That’s not how I would describe it. It’s a privilege and an honor, yet I wouldn’t call it fun,” she said. “But I’m really rewarded. It’s certainly rewarding because I see the social sentiment improving. I see our financial results improving. I see our customer experience improving. And the opportunities for growth at our company are endless. That’s exciting.” 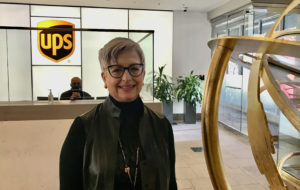 UPS CEO Carol Tomé in the lobby of UPS’ headquarters in 2021. (Photo by Maria Saporta.)

Tomé and her team also are more focused on their philanthropic efforts, including being more engaged in Atlanta.

“We want to be present here in Atlanta. And we’ve stepped it up in a meaningful way giving almost $9 million to supporting organizations here in Atlanta.,” Tomé said. “We’ve got a special focus here because this is hometown.”

And Tomé added: “There’s not a better place for us to be headquartered than Atlanta. The other cool thing about Atlanta, it’s a mecca for people. When we go out to recruit, we don’t have any problem getting people coming to Atlanta.