In 2016, Holocaust survivor and educator Nate Leipciger returned to Auschwitz. (Photo courtesy of Am Yisrael Chai.)

“I was alive, free to go anywhere, but where would I go? I should have been happy, but I was not. But I remembered a time when I was happy,” Nate Leipciger said. “It had only been a few years earlier but to me, it seemed like a lifetime.”

On Sunday, Jan. 22, Atlanta’s Am Yisrael Chai hosted its 2023 Holocaust Reflections and Remembrance event, an annual program to recognize the victims and survivors of the Holocaust. This year, Leipciger — a Holocaust educator and survivor of seven concentration camps — was the guest of honor.

Am Yisrael Chai is a local nonprofit that offers Holocaust education and genocide awareness in hopes of creating a more just world. The annual remembrance event preceded International Holocaust Remembrance Day on Jan. 27, marking the anniversary of the liberation of Auschwitz-Birkenau. As Holocaust survivors age, it’s important to document and share their stories, with the youngest survivors now in their late 70s and nearly 60 percent are over 85.

The event began with opening remarks from Founder and President Andrea Videlefsky, followed by a virtual candle-lighting ceremony led by survivors, with each candle honoring the people whose lives were forever changed or brought to a horrific end.

“Remembrance is a continuing challenge to all of us but the light of our candle strengthens our spirit,” Videlefsky said. “We honor the sanctity and dignity of every human life. We must teach tolerance and respect for every person regardless of race, color or creed. May the light of our candles obscure the kind of mentality and inhumanity that made genocide possible, then and now.”

Leipciger joined the virtual event from his home in Canada to tell his story. He was born in Chorzow, Poland in 1928 and, prior to the war, he was a “happy-go-lucky kid.”

But by 1939, the Nazis invaded, forcing 11-year-old Leipciger and his family to move into the Sosnowiec Ghetto. At 15, Leipciger, his sister and his parents were transferred to Auschwitz, where the family of four fought to stick together. 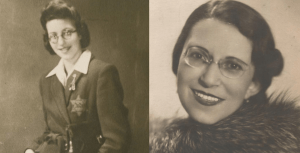 (L to R) Leipciger’s sister and mother, who he was separated from in Auschwitz. (Photo courtesy of Am Yisrael Chai.)

“This moment that I’m going to describe, it’s very difficult. It’s maybe the most difficult moment in my life,” Leipciger said. “[Arriving in Auschwitz,] people [were] crying and trying to stay together. [During] the first separation of men and women, I was standing with my mother and my sister, trying not to leave them. My father ran over to me, grabbed me by the arm, and … at this moment, I didn’t even have a chance to wave goodbye to my sister or my mother — we separated in an instant.”

From there, Leipciger described being further stripped of his humanity, with each prisoner being forced to disrobe, shave their heads and get tattoos with their identification number.

“After that, we were lined up and given a lecture — ‘You will do as you’re told or else. If you don’t behave, you will join your brothers, sisters and parents where they’re being processed,’ meaning that they’re being gassed to death,” Leipciger said. “I don’t know if you can imagine what the impact on my mind was as a 15-year-old boy, whether you can conceive what that actually meant.” 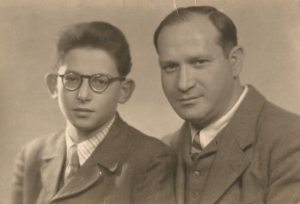 Leipciger and his father. (Photo courtesy of Am Yisrael Chai.)

Leipciger and his father endured several grueling, inhumane work camps — with his father risking his own safety to save his son’s life on multiple occasions — before their 1945 liberation at Muhldorf in Germany.

After the war, the only person who Leipciger knew survived was his father. Hopeful that his mother and sister also made it out alive, he returned to Poland and visited a neighbor’s home where his mother had instructed him to meet her as they were being separated in Auschwitz.

“I was standing there in front of the gate, and I knew that after I go through that gate, I’ll find out the truth,” he said. “Finally, I resolved that I have to face the music. My grandmother’s neighbor opened the door, she saw me and she burst out crying. I joined her in crying and we hugged each other. She said my mother and my sister did not come back.” 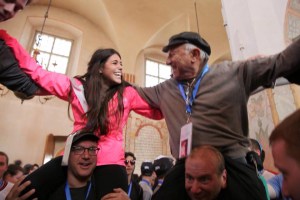 Leipciger and his granddaughter. (Photo courtesy of Am Yisrael Chai.)

Leipciger and his father moved to Toronto, Canada in 1948, where he began an engineering career and met his wife. He now has a big, loving family of three daughters, nine grandchildren and eight great-grandchildren. In 2015, Leipciger published “The Weight of Freedom” and the next year accompanied Canadian Prime Minister Justin Trudeau on a trip to Auschwitz as his guide.

Since that day in 1945, Leipciger has dedicated much of his life to educating the public about the impacts of the Holocaust and the importance of fighting bigotry and hatred in all forms.

“We as Jewish people have the responsibility to carry on the name of the people who did not make it. We have to [teach] our youth to be strong … and we have to stand up and fight antisemitism wherever it is. We have to engage the community at large to help us fight antisemitism, xenophobia and racism. That’s a very important mission in my life. As long as I can stand up and talk, I will do that. That’s my dedication to the Jewish people.”

If you’re interested in watching the full 2023 Reflections and Remembrance event, click here. You can also learn more about Leipciger’s story by visiting Am Yisrael Chai’s virtual exhibit.

Previous Article
Understanding HUB404
Next Article
As Oscar nominations are being announced, Eleanor weighs in