WXIA previews its documentary ’50 Years of Change: Share the Journey’

It’s in the Atlanta air.

As the calendar nears Aug. 28, the anticipation is growing the 50th anniversary of the March on Washington — the day that Martin Luther King Jr. delivered his powerful “I Have A Dream” speech on the National Mall.

On Thursday, WXIA-TV invited key Atlanta dignitaries to preview a special documentary “50 Years of Change: Share the Journey” to showcase the march, the speech and other world-changing events that occurred in 1963.

“When we began to do the research, I was stunned at all the cataclysmic events that occurred in 1963, I don’t know how this country survived,” said WXIA anchor Brenda Wood, who narrates the documentary. “We were living in two different worlds. We knew that, but we were in denial. But in 1963, that world was broken open.”

The documentary interviews many of the living legends who were at the March on Washington, including Rev. Joseph Lowery, U.S. Sen. John Lewis and former Atlanta Mayor Shirley Franklin, who said that day she really felt she was truly one of God’s children.

Wood said that working on the documentary was a “transformative experience in my life.” 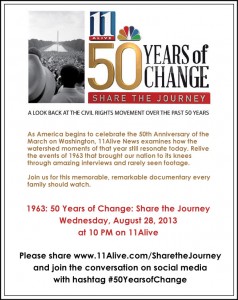 And what she realized that 1963 was a year that changed the nation. There were the well-publicized non-violent protests in Birmingham — including protesters being hit with high-pressure water out of fire hoses and being bitten by attack dogs – as they took to the streets t to call for  integration.

The March on Washington for Jobs and Freedom on Aug. 28, 1963 was a real high point when more than 200,000 people filled the streets and the mall.

But that was followed with tragedy. On Sept. 15, 1963, four girls were killed when a bomb went off at the 16th Street Baptist Church in Birmingham.

Brenda Wood introduced the executive producer of the documentary — Jeffery Reid, who had been with CNN and had produced the Black in America series.

Also Wood and John Deushane, president and general manager of WXIA, urged everyone at the to “Share the Journey” by letting their friends and colleagues know to watch the documentary at 10 p.m. on Aug. 28.

The last portion of the documentary focused on where we go from here. Bernice King, the youngest child of Martin Luther King Jr. and Coretta Scott King, quoted her late mother by saying: “Struggle is a never ending process. Freedom is never really won, you earn it and win it in every generation.”

WXIA is working with the state school system to have a shorter version of the documentary be made available to schools throughout the state along with a work book so students can have it count towards their graduation requirements.

And that way the teachings that King shared with the world 50 years ago can continue to be shared with many generations to come.