The designers of the proposed Atlanta Falcons stadium released several new images on Feb. 14 to show how the facility will look from multiple vantage points.

The basic design elements are similar to the images that have already been released, but there are several new details that give a better understanding of how the stadium will be positioned in relation to the areas around it. 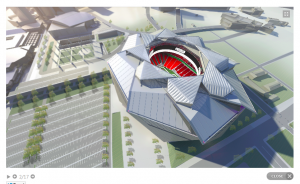 Here is an aerial view of the stadium from the northwest. in the lower right-hand corner, one can see the existing Martin Luther King Jr. Drive end at Northside Drive. The new alignment would be along what is now Mitchell Stret

For starters, the controversial issue of the future alignment of Martin Luther King Jr. Drive shows the existing boulevard from the west reaching a dead-end at Northside Drive.

The Westside communities have become quite concerned about the stadium becoming an obstacle separating them from the central business district rather than creating a greater urban connection between the historically-black universities on the westside and downtown.

Here are a few of the new images. To see entire gallery of new stadium photos, please go click on the new stadium website. 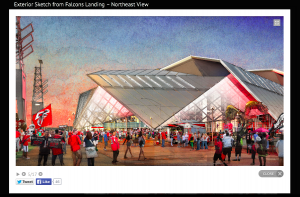 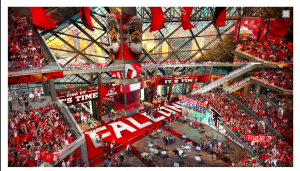