The ocean is talking and Sarah Cameron Sunde — an interdisciplinary artist based in New York City — is listening. For the ninth and final time, Sunde will stand in a large body of water — this time, in New York City — for an entire tidal cycle, between 12 to 13 hours. The City of Atlanta is invited to watch in real-time at Underground Atlanta, hosted by Flux Projects. 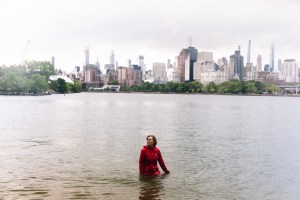 Sunde practicing for her final performance of the series, “36.5 / New York Estuary.” (Photo by Jeremy Dennis.)

Sunde sees water as her collaborator and uses the tides to visually “translate the seemingly abstract idea of climate change and sea level rise” using her body.

“I really think water is my scene partner, and water has all the action in this performance,” she said. “How do I listen as a partner, and let that inform what will happen?”

Sunde started “36.5 / A Durational Performance with the Sea” in 2013 in response to the impact of Hurricane Sandy on New York City, a series of nine public art performances to inspire conversations about sea level rise and our relationship with water.

She waded into the waters for the first time — and stayed there for 12 hours and 48 minutes — during a 2013 artist-in-residence program in Bass Harbor, Maine. 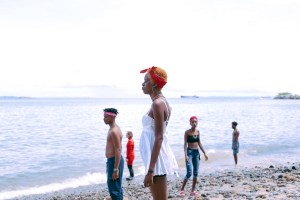 In Brazil, Pretxs de Rua (Black Poets of the Street) performed poetry to mark the passing of each hour. (Photo courtesy of Sarah Cameron Sunde.)

Since then, Sunde has invited the public to stand with her, 36.5 team members and partners during the half-day performances in Mexico, San Francisco, Netherlands, Bangladesh, Brazil, Kenya, New Zealand and finally closing in New York City. She also co-founded Works on Water in 2017, an organization that uses art as a mode to explore water in an urban environment.

Standing for 12 hours — let alone in water — is physically and mentally taxing. “It’s always painful, always a struggle. [The main] reason I’ve been able to get through it so far is serious willpower.” She prepares with yoga, cold showers, speaking with locals and meeting with her liquid collaborator.

“For two weeks in July I was at the cove every day, where I’ll stand in New York, and I’m about to do another two weeks of test stands,” Sunde said. “I want to understand how the water is functioning — what she’s saying and trying to listen — so I know this body of water in a very different way than how we usually interact with the water.”

Her final performance will be livestreamed at Underground Atlanta’s Plaza on Wednesday, Sept. 14, from 7 a.m. to 8 p.m. Once finished, her complete series of nine works will be compiled into 12-channels of video, with two or more from each location, and six layers of audio.

The upcoming livestream will introduce Sunde as the next artist in the Flux Exchange program, where artists are invited to explore Atlanta and create a public art piece rooted in the city. 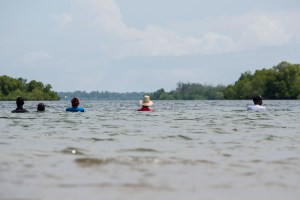 High tide in Bodo Inlet, Kenya. Sunde wears a hat from a local villager made specifically for this performance. (Photo courtesy of Sarah Cameron Sunde.)

Flux Projects Executive Director Anne Archer Dennington is “fascinated” by the 36.5 series, and glad that Atlanta can be part of this global conversation around water and climate change.

“Sometimes really simple gestures leave room for bigger issues,” Dennington said. “She’s essentially letting the water do the talking, and she’s there as a beacon and a presence. By watching her, we’re all able to connect to that place, time and experience. She becomes a stand-in for humanity being vulnerable, open and listening.”

In November, Sunde will kickstart the Flux Exchange program with a visit to Atlanta to become acquainted with the city, local culture and artists.

As for Sunde’s upcoming project, Dennington gave no indication of its focus, adding, “It’s really a blank slate.” Sunde will begin the Flux Exchange program with a visit to the city, meeting with local artists and touring the city for inspiration for her Atlanta-based project.

But first, she has her sights set on “36.5 / New York Estuary.” To see Sunde’s work in action, visit Underground Atlanta on Sept. 14.