The Georgia Trust for Historic Preservation released today its 2015 list of 10 “Places in Peril” in the state.

Sites on the list varied from a hospital to a City Hall to a County Courthouse to fanciful Victorian houses to a Federal Road-Trading Path that travels through 14 Georgia counties.

“This is the Trust’s tenth annual ‘Places in Peril’ list,” said Mark C. McDonald, president and CEO of the Trust. “We hope the list will continue to bring preservation solutions to Georgia’s imperiled historic resources by highlighting ten representative sites.”

“Places in Peril” is designed to raise awareness about Georgia’s significant historic, archaeological and cultural resources, including buildings, structures, districts, archaeological sites and cultural landscapes that are threatened by demolition, neglect, lack of maintenance, inappropriate development or insensitive public policy.

Through “Places in Peril,” the Trust will encourage owners and individuals, organizations and communities to employ proven preservation tools, financial resources and partnerships in order to reclaim, restore and revitalize historic properties that are in peril.

Here is summary information on each of the 10 “Places in Peril”: 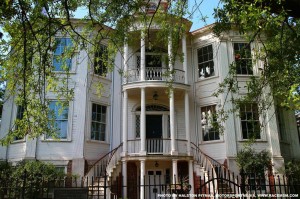 Nicholas Ware, a prominent Georgia businessman and politician, built this mansion on the outskirts of Augusta in 1818. The cost of construction – over $40,000 – was outrageous for the time period, leading to the moniker Ware’s Folly. The home is one of the finest examples of Federalist architecture in the state.

The home was purchased and renovated in 1937 by Olivia Herbert, who donated the property to the Augusta Art Club (renamed the Gertrude Herbert Memorial Institute of Art), which still owns the property. The exterior of the house has fallen into disrepair. A long-range plan is critical for the future of this nationally significant landmark.

The Dart House was built by William Dart, son of Brunswick’s co-founder Urbanas Dart, over 137 years ago. The two-story house was constructed in Folk Victorian style using milled cypress and pine, and has survived numerous hurricanes. The Dart family maintained ownership until 1983, when the house was sold to Golden Isle-Brunswick Chamber of Commerce, which undertook an extensive rehabilitation at the time of purchase.

The Chamber of Commerce relocated to newer offices in 2013, leaving the Dart House empty and susceptible to deferred maintenance and deterioration. In Sept. 2014, the Chamber entered an agreement with the Historic Brunswick Foundation to allow the Foundation five months to raise $300,000 so that it may purchase the property. The Foundation set a goal to raise $500,000 in order to acquire the building and meet any restoration and maintenance needs. Failure to raise the acquisition funds may result in demolition of this important house.

Mandeville Homestead in Carrollton, which housed the Maple Mansion Restaourant

L.C. Mandeville, son of an early pioneer family in Carroll County, built this home in 1890. The Queen Anne Victorian was the first house in the area with indoor plumbing and electricity. The residential home was converted for commercial use in the 1960s, most notably serving as a restaurant called The Maple Street Mansion. The original building was expanded to include a sports bar, meeting rooms and an event space.

The Mandeville Homestead has been vacant for several years and is showing signs of neglect. When the Maple Street Historic District was formed in 1988, the property was not included in the district and therefore is not subject to Carrollton’s Historic Preservation Ordinance. Current plans are for demolition of the original structure unless new tenants and funding for rehabilitation can be identified.

East Point City Hall, City Auditorium, City Library and Victory Park form a contiguous block that has been the heart of downtown East Point since the 1930s.

The East Point City Hall still houses city offices, but its use is limited. The City Auditorium was closed to the public in 2011 and has sustained roof damage leading to interior water damage. The library, closed since the 1990s, is currently used as a storage space by the city. With no plans for protection and the constant threat of demolition through neglect, the future for these historic buildings remains uncertain.

Constructed in 1910, the Haistens Hospital building replaced an earlier hospital. At the time of construction, the building was worth $25,000 but was built for $15,000 thanks to reuse of materials and generous donations. The building also served as a nurses’ dormitory and personal care facility.

The building is now vacant and in disrepair. It was acquired by the City of Griffin’s Land Bank and a new owner is being sought. If a renovation plan cannot be established quickly, the building will be transferred to the City of Griffin for demolition and the property will be given for an alternative use.

Dr. Stewart, Portal’s first doctor, built this drugstore in 1907. The small wooden building served as a pharmacy, doctor’s office and soda fountain over the years, and Dr. Stewart was known to do surgery in the back of the drugstore while his wife tended the soda fountain in the front. Though the drugstore closed in 1950, its interior remains largely intact. With medical books and instruments, stocked shelves and the soda fountain still inside, this is perhaps the most thorough and authentic example of an early community pharmacy in the entire state.

The building was vacated in 2008, and since then neglect, a lack of maintenance and potential vandalism has continued to threaten the structure. Additionally, extensive damage occurred during the winter of 2014 due to a pipe that froze and burst. A cooperative effort between the State Property Commission, the Board of Education, local government and concerned citizens gathered some momentum to rehabilitate that building to serve as a community center, but a concrete plan remains elusive.

Thomas K. Glenn, a pillar of Atlanta business in the early 20th Century, built this estate in 1929 on 400 acres of farmland north of Atlanta. Designed by Samuel Inman Cooper, the Tudor Revival property also included smith and carpentry shops, stables, barns and housing for workers. Beginning in the 1980s, T.K. Glenn’s granddaughter and her husband fought to preserve the house and its setting. Glenridge Hall was listed on the National Register of Historic Places in 1982 and the couple thoroughly restored the home with the dream that it be available for the public to enjoy. The home has hosted many charitable events and retreats over the years and has been used in films such as Driving Miss Daisy and, most recently, CW show The Vampire Diaries.

Of the original 400 acres, only approximately 80 acres remain as part of the Glenridge property. In the summer of 2014, that acreage was placed up for sale. Because of its location (just west of Georgia 400 and bisected by Abernathy Road), large-scale commercial development is highly likely. At this time, there are no protections for Glenridge Hall that would keep the home from being significantly altered, or even demolished, and its surrounding property inappropriately developed. Conservation easements and other tax incentives could help preserve this beautiful home and grounds.

Listed as a 2013 Place in Peril, the Hancock County Courthouse is in the National Register for Historic Places. Built in 1883 and designed by Atlanta architecture firm Parkins and Bruce in the Second Empire style, the courthouse was well known for its red brick façade and prominent clock tower. After suffering from decline due to a lack of funding for maintenance, the county had recently started $150,000 worth of exterior renovations.

In August 2014, a fire ripped through the courthouse, destroying the famed clock tower and leaving only the exterior brick walls standing. The county will be forced to relocate its business in the short term as it works with insurance adjusters, architects, engineers and contractors to rebuild the courthouse with the inclusion of modern upgrades necessary for today’s county courthouse. The Georgia Trust supports these efforts and will work with the county on rebuilding the courthouse.

The Federal Road in Georgia developed from the established Lower Creek Trading Path, a trading path between Lower Creek Nation and Upper Creek Nation towns. Following the Louisiana Purchase in 1803, President Thomas Jefferson and Benjamin Hawkins, his Indian Agent to the Creeks, negotiated official use of the trail as a Federal Road and it became a conduit for white settlement in southwest Georgia, Alabama, Mississippi and Louisiana. Today, known portions of the Federal Road serve as roadbeds of several modern highways that utilize the same established route through Georgia.

In recent years, archaeologists and historians in Alabama have made a concerted effort to document and preserve the history of the Federal Road in that state. There has been no similarly well-coordinated effort in Georgia. Remaining traces of the Federal Road, particularly where it is unmapped, are susceptible to loss through development, agriculture and modern road and bridge construction. The ‘Places in Peril’ program helps build greater awareness of this highly significant early transportation corridor.

In looking back at previous years of the “Places in Peril” lists, the Georgia Trust has been able to shine a spotlight and help preserve several gems in the state.

* Stilesboro Academy in Bartow County, which received a $25,000 gift in 2013 to restore the exterior;

* Chattahoochee Park Pavilion in Gainesville, which was restored in 2013;

* Fort Daniel in Buford, which was purchased by Gwinnett County and leased to the Fort Daniel Foundation which is developing an educational outreach program;

* the Spencer House in Columbus, which received a $10,000 grant from the Historic Columbus Foundation and community support to finish restoring the exterior; and

* the Hill House at Andalusia in Milledgeville, which received a Save America’s Treasures grant from the National Park Service and a Preservation Award for Excellence in Restoration from the Trust in 2013.

* The Trust also gave Andalusia a $2,500 grant for restoration of the barn.

Updates on these sites and others can be found at the Georgia Trust website.

Founded in 1973, the Georgia Trust for Historic Preservation is one of the country’s largest statewide, nonprofit preservation organizations.

Committed to preserving and enhancing Georgia’s communities and their diverse historic resources for the education and enjoyment of all, the Georgia Trust generates community revitalization by finding buyers for endangered properties acquired by its Revolving Fund. It also provides design assistance to 102 Georgia Main Street cities and encourages neighborhood revitalization.

It also trains teachers in 63 Georgia school systems to engage students to discover state and national history through their local historic resources, and it advocates for funding, tax incentives and other laws aiding preservation efforts.

For more information on each of the 2015 “Places in Peril locations, please click on this link.