Urgency of climate conference muted by gunfire on two continents 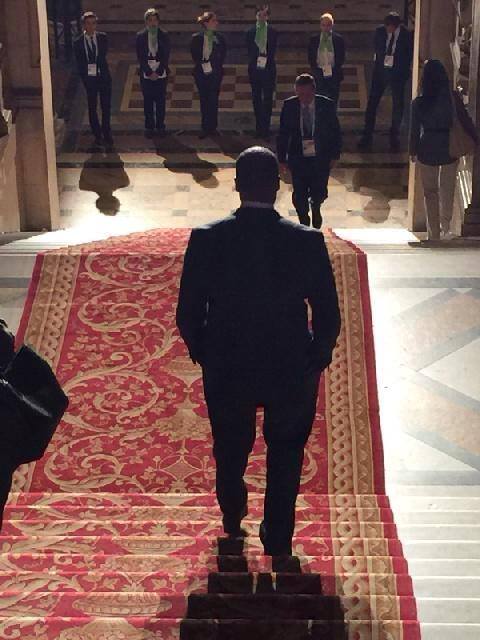 Bracketed by the splatter of terrorist bullets on both sides of the Atlantic, the United Nations Climate Change Conference in Paris hasn’t attracted as much attention as the planners must have hoped for.

Everybody from Atlanta Mayor Kasim Reed to UN Secretary-General Ban Ki-moon has traveled to the glittering gathering to wax profound about the urgency of the need to do something about global warming. But the Paris attacks which preceded the conference, and the attack last week in San Bernardino, have drowned out these calls.

There must be no surer way to attract scorn from the right than to suggest these two urgent matters, global terrorism and global warming, have something to do with each other. This, writes the Heritage Foundation’s Peter Brookes in Fortune,  “not only misleading—it’s dangerous because it distracts us from today’s very real, very immediate life-and-death threats from terrorism.” A chorus of Republican presidential candidates has voiced its agreement with that position.

But a Defense Department report to Congress last summer said military strategists “are already observing the impacts of climate change in shocks and stressors to vulnerable nations and communities,” and warned that climate disruption was a present, not long-term, risk to national security.

It’s much easier, in short, to foster an apocalyptic cult in an apocalyptic landscape. Thomas Friedman is among those who have written of the impact of the four-year drought which preceded the Syrian civil war, and the heat wave which sent the heat index in one Iranian city to 163 degrees.

It is a long thread that connects these matters with the suburban couple who left their baby with her grandmother and drove off to shoot up the county health department Christmas party. But it’s an increasingly, infernally complicated world. The “shocks and stressors” of global events reverberate in ever more bizarre ways, sending the distress waves of local disruption in unpredictable directions, like the ocean-born rubbish from a far-away tsunami.

The Defense Department report speaks of the disruptions caused by climate change as a “multiplier” effect, exacerbating other problems. Only in politics do “either” and “or” play a great role in the way we think about such things; in reality one problem usually makes another worse.

The convention, which ends Friday, appears to have been a combination of celebrity runway event and historic policy discussion. Stephanie Stuckey, Reed’s sustainability director, described it as “Disney World for climate geeks.”  It won’t solve the world’s environmental problems, but it will lead to an international framework which the next president, be that a Democrat or a Republican, will be compelled to work within.

Already, the developing world has begun to emerge as the leader in the development of renewable energy resources, creating an increasing competitive challenge over coming decades to older economies still tied to fossil fuels. That’s an emerging reality which will be happening whether the world gets hotter or not.

Reed was part of a side group of mayors who went to Paris to talk about what can be done at the local level to reduce greenhouse gas emissions and water consumption, at a meeting organized by former New York mayor and UN special envoy Michael Bloomberg. He promised an “aggressive” effort by the city, which has already moved toward electric vehicles and solarized city buildings.

For the time being, this engaged attitude will be counterbalanced by state officials who remain hostile to the suggestion of any government-directed efforts to deal with a problem they and many of their constituents don’t think exists.

That isn’t the consensus of the world. The Paris conference, with its glitzy overtones set against the bloody backdrop of recent events, will seem in many ways irrelevant. But with the perspective of a few more years it may be remembers as a much bigger deal than we think it is today.