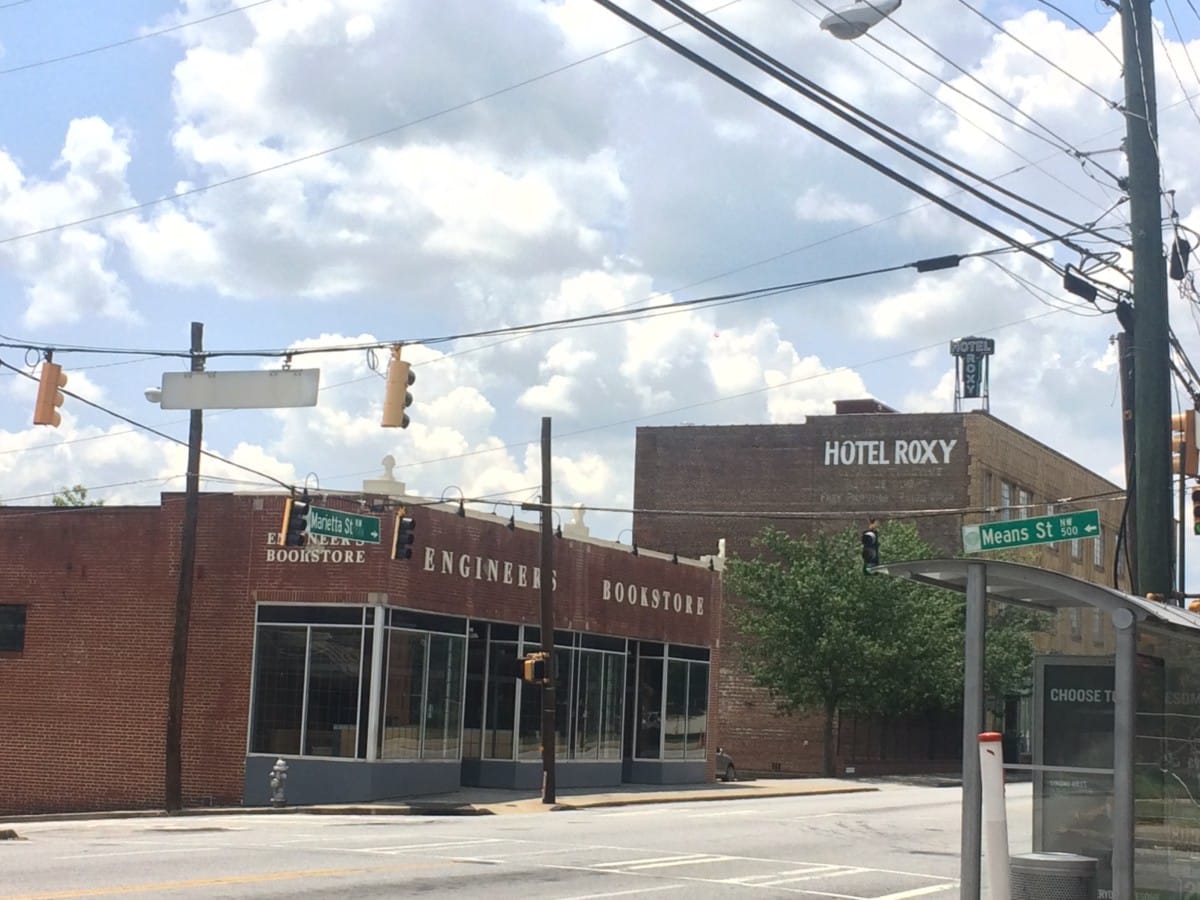 The fight to save the 1930s-era building that most recently housed the Engineer’s Bookstore on Marietta Street exposes weaknesses in Atlanta’s preservation power.

The bookstore closed in May, and the building was sold to Omair Pasha. Contrary to what he originally told people in the community, Pasha disclosed he intends to demolish the building and redevelop the property into a gas station and EZ Mart.

“I can’t envision any proposal that would have a more adverse effect than this one,” said Bill Gould, an adaptive reuse developer who renovated the Allied Factory Lofts – which is behind the Engineer’s Bookstore. 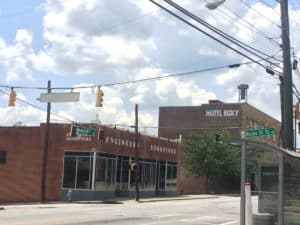 Gould also was a founder of the Marietta St. Artery Association, which fought to give the district an historical designation.

“From a quality of life perspective, it’s the most horrific things I could imagine being in our front yard,” Gould said ticking off the prospect of fumes from the gas pumps, bright lights shining 24-hours a day and the traffic a gas market would generate.

What’s even worse is that a gas station would diminish the integrity of the Means Street National Register Historic District. The cluster of buildings near Means Street and Marietta Street reflect a slice of the past when it was an industrial district.

“Every one in the community opposes the demolition of the building,” Gould said. “Our major goal is to make sure the building doesn’t get torn down.”

An online Change.org petition already had been signed by nearly 500 people when this column was posted at 2 a.m. on Monday morning. Community leaders hope the public outcry will make a difference.

Unfortunately, the government of the City of Atlanta has few levers it can pull to save the building based on its historic merits.

“I don’t know of any official way to stop a demolition here given the current I-1 Light Industrial zoning and it not being a locally-designated historic district or overlay,” said Kyle Kessler, a preservation leader. “The only course of action I know of would be to start a local-designation process which would freeze any demo application for up to 120 days.”

Community leaders and preservationists believe their best tactic is to fight a owner’s application for a beer and liquor license. That application will go before NPU-E (Neighborhood Planning Unit – E) on the evening of Aug. 2, and there are valid reasons to deny that application. 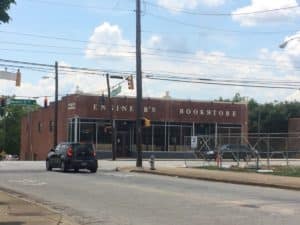 Across the street, there is a Salvation Army facility with a chapel and a rehab center for people with addiction issues – primarily with alcohol. Having an EZ Mart next to a chapel and a rehab facility is not a desirable use for the area. Also, the property is across the street from several Georgia Tech facilities, including some that are frequented by students. Again, that could be a reason to deny the permit.

But even if the community is able to kill the project with the denial of a liquor license, it does not address a much more fundamental issue – how lax the city has been in providing tools to save our historic buildings.

“It may be worth noting that the city has not updated its overall official inventory of historic resources since 1987,” Kessler said. “There was an attempt made in 2005, but the project was put on hold.”

Kessler said that in the 2004 Comprehensive Development Plan stated:

Atlanta’s Lasting Landmarks does establish a significant record of many of the City’s historic resources. However, it does not account for all the historic resources in the City due to the following current conditions:

2) the current categories of protection established by the Historic Preservation Ordinance of 1989;

3) properties which have been demolished or have lost their character-defining elements; and

4) previously undocumented or unrecognized historic resources which are a significant part of the City’s history. This last condition accounts for a significant portion of Atlanta Lasting Landmarks’ deficiencies. 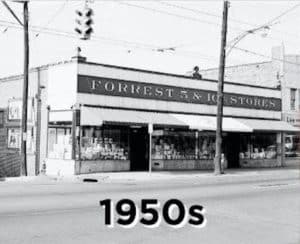 Back in the 1950s, the building was a 5 and 10 store. It later was a business that sold used and new appliances before becoming the Engineer’s Bookstore (Photo illustration by Kyle Kessler) 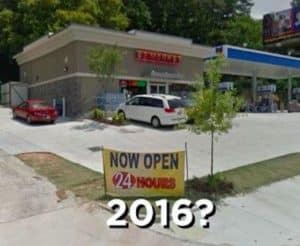 As Kessler concluded: “The preservation advocates in Atlanta will continue to be behind the eight ball until the city updates its (Atlanta Lasting Landmarks) survey.”

If Atlanta had passed a local designation for the Means Street National Historic Register district, then a demolition permit would have needed approval from the Atlanta Urban Design Commission.

The good news is that Atlanta now has a Commissioner of Planning and Community Development – Tim Keane – who is working with his team to revamp the city’s zoning ordinance. The department also is working with the public to come up with design guidelines that are unique to Atlanta and could strengthen the city’s ability to save historic properties.

Development trends also are favoring the renovation and restoration of our historic buildings – especially in the central city. Millennials tend to favor developments with unique characteristics – helping us place Atlanta in an historical context.

Now we just need our city government to catch up with its citizens.

Note to readers: Before the Engineer’s Bookstore moved to Marietta Street in 1993, it was located on North Avenue about midway between Luckie Street and the Burge Apartments, where I grew up. The Engineer’s Bookstore was one of my favorite places to go – all the different kinds of paper, pencils, pens, erasers, compass tools and slide rulers. One year, my parents gave me a $5 gift, and I went directly to the Engineer’s Bookstore to buy what I could. At the time, North Avenue and Luckie Street corner was a neighborhood commercial district with several shops, a grocery store and different places to eat. Today, all those buildings have been torn down and several have been replaced with parking lots. 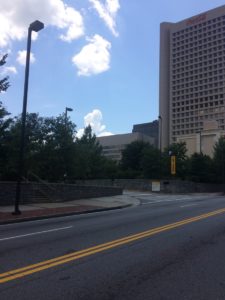 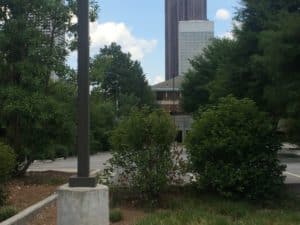 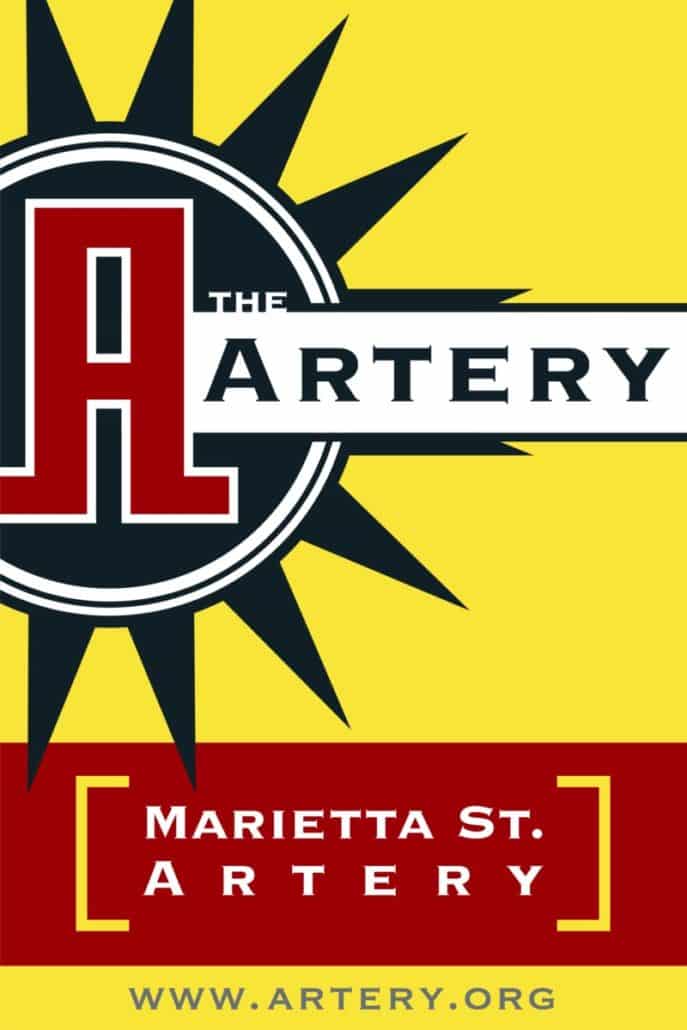