A civic dream: Oglethorpe and the founding of the Georgia colony 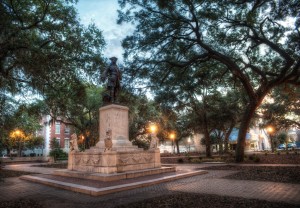 Hidden in Georgia clay, floating in Georgia air, are stories that have the power to tell us who we are, where we’ve come, and maybe even where we’re headed. These are what I call “civic stories” — stories about building new kinds of communities. 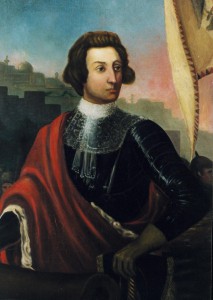 Such stories can be thought of as dreams, as civic dreams, and even if they lack a happy ending, civic dreams can’t really die. They usually carry some message for us to decipher. When this message is revealed, civic dreams can become guides and even inspirations. They can help us take the measure of the present in our long journey of learning how to live together.

This story is about Georgia’s founding. History textbooks describe the founding of colonial Georgia as a penal colony. How that myth began is another story. The fact is that only one individual in the first wave of settlers had been imprisoned, and that was for debt.

James Edward Oglethorpe and a London-based group of Trustees were the guiding hand behind Georgia’s settlement, the last of the 13 English colonies. Already widely regarded in London as one of the nation’s great humanitarian reformers, Oglethorpe, at the age of 37 and with the blessings of King George II, led 114 men, women, and children from Gravesend on the Thames to Yamacraw Bluff, so-named by the Creek Indians and re-christened as Savannah. They landed in February 1733. 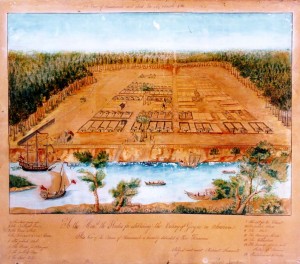 This first wave of settlers came with a clear idea of their mission, at heart philanthropic and embodied in the Trustees’ Latin motto of Non sibi sed aliis, “not for self, but for others.”

Georgia admitted everyone who was willing to work, including persecuted religious minorities. In the first year, a community of Ashkenazic and Sephardic Jews established residence, including an extraordinary physician, Dr. Samuel Nunes, whose services proved critical to the colony’s survival. A few years later came the Salzburgers, a persecuted Protestant minority from Austria, and then the Protestant Moravians from central Europe. The great Anglican evangelist, John Wesley, who visited the colony, was much influenced by the Moravians and would return to England as a “Methodist” reformer. Just to the south of Savannah, at today’s Darien, came a Presbyterian band of Highland Scots in “a poor, starving condition” (they would flourish in their new home).

From the outset Oglethorpe and the colony established friendly relations with the Yamacraw Indians, whose chief was Tomochichi. 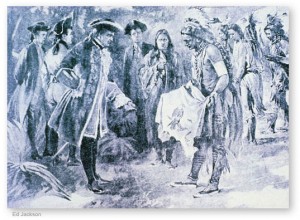 The colony banished rum (it was unwholesome) and lawyers (they were litigious), as well as Catholics (Spanish Florida posed a serious threat to their security).

The Trustees granted 50-acre increments of land to those who came over “on the charity,” in the spirit of equality. Those paying their own passage received 500 acre grants, larger but still in the middling range.

Most significant of all, Georgia prohibited slavery, becoming the first and only English colony to take that drastic step.

A second clue to Georgia’s founding vision is the Savannah city plan, which to this day remains a model, if not the model in city planning worldwide. Less appreciated, however, is the revolutionary civic purpose behind the plan. Before settlers turned the first spade of earth, Oglethorpe laid out four wards. At the center of each ward was a public commons, or square, surrounded on four sides by lots designated specifically for schools, businesses, private dwellings, churches, and charities. Streets bounded and connected the wards, making for uninterrupted movement. (We can glimpse what Georgia’s founders had in mind in today’s historic district — an urban garden of 22 public squares bordered by churches, dwellings, businesses, charities, and schools.)

Without a doubt, Savannah was a template for an entirely new kind of civil society. Manageable self-government in an atmosphere of religious freedom and diversity are dominant themes. The commitment and immense personal sacrifice of those who settled the colony, the leadership of Oglethorpe, and the philanthropic intent at the heart of the Trustees’ charter made the vision real. 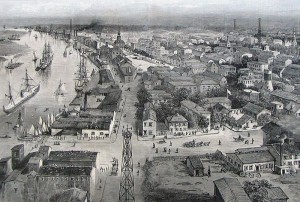 The city and harbor of Savannah, circa 1889. Courtesy of Hargrett Rare Book & Manuscript Library, University of Georgia

Was Georgia’s concept of civil society too far-sighted for its own day? Just to the north of the young colony was South Carolina, beckoning like a siren call. There, the institution of slavery flourished. Planters grew rich cultivating rice and indigo for European markets, using their profits to buy more land and slaves and to build mansions reminiscent more of the old world than the new. Also problematic was the Georgia Trustees’ challenge of managing the colony from afar (the charter did not provide for a legislature). The Trustees’ limitation on wealth acquisition in the name of societal reform eventually spurred a “malcontent” group of settlers who wanted restrictions removed.

Within 20 years of Georgia’s founding, alas, slavery was legalized. By now Oglethorpe had left the colony, called back to London by the Crown. Georgia passed out of the Trustees’ hands and into the King’s as a new royal colony. The dream ended with the advent of a new era, one rooted in plantation slavery, rice cultivation, and cotton.

What can we say about Georgia’s founding? Surely it is one of the great civic experiments of the New World. New England Puritans had their City on a Hill, one that welcomed only people exactly like themselves. Georgia’s City on a Hill was a different model entirely, with its civic ideals of tolerance, relative equality, and opportunity for “unfortunates.” There was nothing else like it in the New World, or old one. This was the dream, before it was spoiled by slavery.

As we celebrate the founding of Georgia this month, remember that civic dreams can become real. Certainly the United States is fertile territory for dreaming. Oglethorpe’s dream of the “good community” (another Georgian would use the language of the “beloved community”) is a reminder to us of the power that a vision can have when it affirms life, opportunity, virtue, and community. Perfection may be beyond the reach of us humans, but as long as we can dream, there is hope for our lives together.