By Maria Saporta
Published in the Atlanta Business Chronicle on Friday, January 4, 2013

A new nontraditional private equity firm is focusing on providing longer-term investment for small and midsized companies in Georgia.

Georgia Oak Partners LLC is a venture that is being launched by A.D. Frazier, the former chief operating officer of the 1996 Summer Olympic Games, and Michael Lonergan, a veteran in the private equity and hedge fund fields.

The firm also completed its inaugural transaction at the end of 2012 — acquiring a controlling interest in Alpharetta-based TeamOne Logistics, a transportation and logistics company founded in 2003 that specializes in employee services, including recruitment and screening, training and development, benefits, risk management and compliance.

TeamOne, which has more than 750 employees across 26 states, fits the profile of the kind of investments that Georgia Oak intends to make. It generates about$50 million in annual revenues, and it has great growth potential. Its founder, Jerry Gray, will continue with TeamOne as its president. And it is based in Georgia.

In 2010, Frazier chaired the Special Council on Tax Reform and Fairness for Georgians that had been established by House Speaker David Ralston. 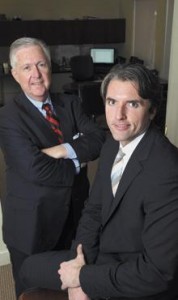 The council met with company executives across Georgia, and Frazier realized that “a lot of companies in Georgia could use capital to grow” and that they represented the “backbone” of the state’s economy.

Lonergan said Georgia Oak sees itself more as an investment partner in its companies.

“Private equity still operates in a speed that’s inconsistent to what small and midsized businesses want,” said Lonergan, who is the managing partner of Georgia Oak. “We are focusing on long-term operational efficiencies. Bringing something to the table beyond just money. We are bringing operational expertise and logistics with our investment.”

While most private equity firms look to sell their stakes in companies within a three- to five-year window, Lonergan said it expects that it will hold most of its investments for at least five years.

“We are looking to grow businesses,” Lonergan said. “It’s an alternative to traditional private equity, and our focus is the state of Georgia. Companies in our backyard.”

Georgia Oak is seeking to invest in privately held businesses based primarily in Georgia with revenues of $10 million to $100 million.
“We have got another dozen deals we are looking at,” Lonergan said. “Our goal is to deploy $50 million of capital in the next three to four years, maybe an average of $5 million a deal.”

More specifically, Lonergan said Georgia Oak’s current pipeline includes about 15 companies, 14 of them in Georgia and one in South Carolina. It currently is in “active diligence” on six of those — and all of those are Georgia-based companies.

Instead of going to market to build an investment fund, Lonergan and Frazier said they have a pool of investors — primarily high-net-worth individuals as well as institutions and family investment offices.

“We will not have any shortage of people who are interested in providing long-term capital. Each investment should stand on its own,” said Frazier, who said that Georgia Oak will be his full-time endeavor, spending five days a week in its Buckhead office. “Mike and I believe in the same things, but he’s half my age and probably twice as smart.”

The TeamOne investment appealed to them because the enterprise of 750 employees fills a real need for companies. It recruits and trains truck drivers for companies, taking care of regulations and guaranteeing safe and quality drivers.

TeamOne helps reduce the headaches that some companies have when trying to find reliable employees to transport their products.

Financing for the transaction was provided by The Brand Bank’s Commercial Banking Division.

The lead director at TeamOne will be Chris Munro, one of Georgia Oak’s advisers and a veteran in the private equity field.

Now Frazier and Lonergan are setting their sights on solid Georgia companies that need capital to grow.

“We really are looking to build jobs in Georgia,” said Frazier, who said he will be leveraging contacts he’s made throughout his career. “A good thing about having been around a long time is that you know a lot of people.”