By Maria Saporta
As published in the Atlanta Business Chronicle on September 18, 2015.

About 20 years ago, an anonymous donor appeared on the Atlanta scene, giving away millions of dollars in an out-of-nowhere, yet strategic way.

When the Atlanta Symphony Orchestra was about to layoff nine musicians in the mid-1990s, a gift of $4 million (with some matching challenges) helped save the day.

When Children’s Healthcare of Atlanta was considering adding Hughes Spalding, the historically-black children’s hospital next to Grady, an anonymous gift of nearly $20 million made that possible.

So who was the new anonymous donor behind these millions of dollars from heaven?

“It’s the Kendeda Fund, and the donor wishes to remain anonymous,” was all Barry Berlin, the financial manager for the fund and manager of Atlantic Trust’s local office, would say.

In a two-hour interview on Sept. 14, the day after her birthday, the donor agreed to finally reveal her identity to Atlanta Business Chronicle.

Diana Blank, now in her early 70s, was willing to go public for several reasons. The Kendeda Fund is making the largest gift in its history, one that is especially close to Blank’s heart: a $30 million grant to Georgia Tech for a Living Building Challenge 3.0.

Her daughter, Dena Kimball, recently agreed to become executive director of the Kendeda Fund — giving the two an opportunity to combine forces on their philanthropic endeavors and have the foundation become more visible.

And Blank, who has never wanted to be in the public eye, now is more at ease with the belief that her lifestyle won’t change significantly once her identity is known.

A wise, warm and humble Diana Blank sat down for an interview with her daughter Dena, who was celebrating her 44th birthday — one day after her mother’s. 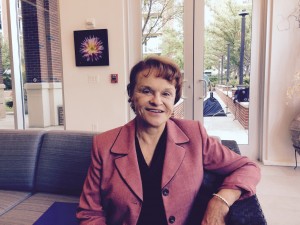 Because Blank grew up in a family of modest means, she said she did not have a strong tradition of philanthropy other than knowing that her parents gave to the Catholic Church.

After she and Arthur Blank divorced in 1993, she began to explore the world of philanthropy through the Atlanta Women’s Foundation, San Francisco’s Tides donor advised funds and her financial manager, Barry Berlin.

“My way over the years may not have been the most professional,” Blank said. “I just followed the things I was interested in — education, the environment, the arts. We did not have to go through layers of approval.”

Kimball quickly chimed in that her mother’s instincts have always been sound although her giving style could be viewed as entrepreneurial, opportunistic and non-traditional.

“She has an ability to make independent judgment calls,” Kimball said.

Take the name Kendeda. Blank named it after her three children — Kenny, Dena and Danielle — taking the first few letters of their names to form Kendeda.

“I wish I had thought of that, but it was all Diana,” Berlin said.

Blank, however, is quick to give other people credit for what the Kendeda Fund has accomplished over the years.

“I just explored my interests,” she said. “I didn’t have a definite idea in my mind. But I gained more confidence. I have loved the name. I knew what it meant, Barry knew, and my family knew. A lot of people think it’s some Indian name. It’s worked really, really well. I hope Kendeda has gained some respect in the philanthropic sector.”

In the past 20 years, the Kendeda Fund has given away about $480 million to numerous initiatives in Atlanta, nationally and around the world.

Its entrepreneurial spirit has changed philanthropy, such as the Grants to Green initiative. The Kendeda Fund has invested $5 million to help nonprofits make their facilities more energy efficient if they matched that investment. More than 200 nonprofits have participated in the program that includes the Community Foundation for Greater Atlanta and Southface.

And the Grants to Green initiative is saving nonprofits a total of $1.5 million a year, a number that grows every year and serves like an endowment for those institutions. It is a model that other communities want to replicate.

Despite the Kendeda Fund’s successes, Blank said she is getting older and wants to step back. Her children had an open invitation to become more involved. And finally Dena Kimball, who had a background in nonprofits and had moved back to Atlanta in 2011, decided she wanted to go work with her mother.

“Barry had communicated the plan to spend down the foundation,” Kimball said. “Anyone who has a job in philanthropy knows it’s a privilege. And to be able to work with your mom… It was a realization that it was a now or never opportunity. I also felt I had something to contribute.”

“We have different styles, but there really is a mutual respect,” Blank said. “One of the reasons Dena wanted to do this is that when she became a mother, it gave us an opportunity to communicate about things we both care about other than family. We respect one another’s passions.”

The plan is for the Kendeda Fund to spend its assets by 2024 — which Blank estimated would equal about what the Fund has already invested — or a total of about $1 billion.

“I give it away, and it keeps coming back,” Blank said laughingly. “We give away between $40 million and $50 million a year. A billion dollars? That’s a lot of money. You just hope you are supporting initiatives that have value.”

Dennis Creech, founder of nonprofit group Southface, which has worked closely with the Kendeda Fund over the years, said what has impressed him most about Diana Blank has been her humility. She flies coach. She carries her own bags. She does not draw attention to herself, preferring to blend in with the background.

Blank said that’s why she chose to remain anonymous all these years. She likes her privacy. She enjoys a simpler lifestyle, spending half her time in Montana, a quarter of her time in Atlanta and the rest traveling.

As she’s grown older, she is drawn more and more to nature, seeking ways to make the world a healthier place to live.

“I’m such a believer in the natural world being a healing influence,” said Blank, who has turned to nature during the most challenging times in her life.