As controversy over the “Defend the Atlanta Forest” protest movement escalates into terrorism charges and civil liberties infringements, you’d be forgiven for having no idea that a big piece of it revolves around model airplanes.

For a half-century, the Atlanta Radio Control Club has flown high-end, remote-controlled model aircraft on a miniature airfield – complete with a paved runway – at DeKalb County’s Intrenchment Creek Park. The club was there for decades before the County swapped the parkland with movie studio executive Ryan Millsap in a controversial and lawsuit-triggering deal, and it is a major blockade to any redevelopment. It was there before protesters arrived from near and far to obstruct the swap in a movement that expanded to include Atlanta’s even more controversial plan for a public safety training center in a neighboring forest. And it tried to live alongside those protesters before the detente soured amid property destruction.

Shawn, a club member who did not want his last name published, expressed some sympathy for the goals of the local lawsuit challenging the land swap. He said that when protesters showed up to live in tree houses as civil disobedience, the club went with a live-and-let-live approach.

“We said, ‘We’re gonna remain neutral in this,’” he said. “We didn’t feel any need to get into the politics. We just want to fly. We’re just a bunch of old men. We want to fly.”

The tree-sitters indeed coexisted with airplane hobbyists for months. The peace broke last summer, Shawn said, when protesters demolished the club’s airplane tables and carports worth thousands of dollars and used the debris as a blockade to Millsap’s redevelopment work.

The protesters could have been “good neighbors, and honestly they failed at that,” he said. “They’re not neighbors anymore. This is the War of the Roses.”

The club’s role is one of many crucial on-the-ground details that have been lost or suppressed in the heat of the debates. Members have not told their own stories because of fear of retribution from the faction of protesters who have tossed Molotov cocktails, burned a contractor’s truck and written menacing graffiti about cops and developers. Fear now pervades local discussions to the point that no one in this column wanted to be named fully or at all to avoid trouble — mostly with protesters, partly with the law.

Gov. Brian Kemp and state and Atlanta police have spoken of the protest movement in broad strokes as a criminal organization of outsider terrorists. Various protesters have said that’s a false accusation designed to chill free speech and that they are part of a movement of unorganized individuals, not a group, with peaceful intent to oppose environmental destruction and support police reform or abolition. All of that leaves unclear who exactly is doing the destructive parts or even who to ask. Email addresses used for anonymous press releases for Defend the Atlanta Forest and Stop Cop City events did not respond to contact requests. There is also the possibility that undercover police or other agent provocateurs are involved, a tactic long used by the FBI and police agencies nationwide.

For locals like the model aircraft club, nuances of motive aren’t as important as the impact of a threatening atmosphere and property destruction. “We’ve been catching hell here left and right,” said Shawn, adding the club’s membership has plunged from around 100 to around 20. “Because nobody wants to come here unless you come here in pairs. You don’t know what you want to be confronted with.”

Why not fly somewhere else in the meantime? That’s not easy because flying model airplanes is highly regulated to avoid conflicts with real aircraft or radio communications. In fact, Shawn said there are very few places available in DeKalb to do it.

That’s why the club’s airfield at 1600 Constitution Road – created under an ancient handshake agreement with the County – is a little-known sticking point in any redevelopment of the former parkland. A major part of the deal is simultaneous replacement elsewhere of any amenities lost from the former park – but the airfield is virtually impossible to replace locally.

Shawn said he thinks the lawsuit against the swap – filed by the South River Forest Coalition and the South River Watershed Alliance – has “probably legitimate arguments.” And while the club is now in conflict with protesters, the ironic backdrop is the airfield is playing a key role in literally preventing any redevelopment.

When asked about that status making the group a de facto form of forest defender, Shawn said, “We are. We truly are…. Basically yes, we are the defenders of the forest, unofficially. We just don’t have to fight for it. We just have to wait.”

That made the attempt to coexist with the self-proclaimed forest-defending protesters a bit easier at first, even if the club had some suspicions about them being outsiders or using pseudonyms. “We call them the tree people. We don’t know what else to call them,” Shawn said. “In all honesty and reality, we’re helping the tree people without helping them.”

The relationship had friction points, like protesters camping on the airfield and leaving behind some out-of-state IDs, Shawn said. Another factor is the model aircraft’s propensity for crash landings in the forest. The task of hunting down the expensive vehicles – Shawn calls them “big-boy toys” that can cost thousands of dollars apiece – was suddenly complicated by the presence of tree-sitting protesters. Shawn said the club was advised to start giving protesters, known by such names as Windjammer, a heads-up.

“I have to text somebody and say, ‘Hey, we lost a plane in the woods,’” he said. “One of the main organizers, I have to text him… And I’m like, why do we have to get permission to go into the woods to get our planes?”

On some of those searches, he said, club members were “chased out” of the woods by protesters advising them to leave, found tripwires, and may have had 2-by-4 boards tossed at them from tree houses, though he said there were no direct physical threats. He said the message requirement, as well as some requests to donate to fundraising, made him believe there is in fact an organized group involved.

That perception was reinforced, he said, when a plaintiff in the land swap lawsuit became a go-between for the club and the protesters in arranging the plane-hunting trips. He declined to name that plaintiff, saying he’s not out for “revenge.”

The attorney representing the local plaintiffs did not respond to a comment request. But a source familiar with the negotiations said there is indeed no organization and that acting as a go-between merely involved connecting with randomly encountered tree-sitters who came and went, and who sometimes themselves spoke of conflicts with younger and more destructive visitors. “It’s part of the power of that movement that they’re autonomous, but it’s also a frustration that you can’t nail anybody down on anything when you have a problem,” the source said.

The club certainly had a problem last July when protesters suddenly blockaded the airfield entrance – and demolished club structures to do it. The protesters tore down carport shelters that were several years old as well as tables used to set up aircraft. Some of those tables had just been built at a cost of $8,000, Shawn said. Some pieces of the furniture ended up in the tree houses as well, he said. 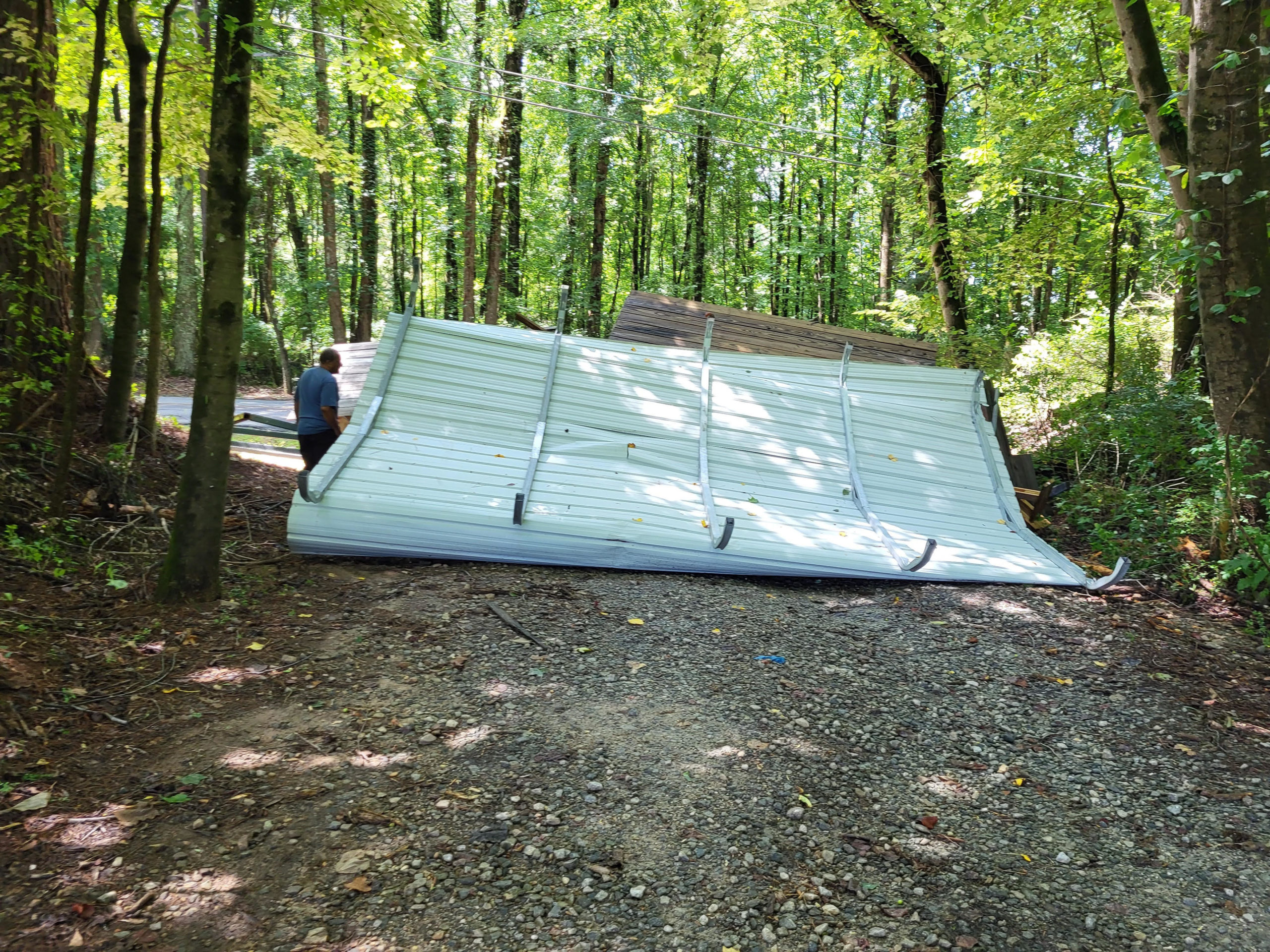 A destroyed carport was among the furniture used by protesters to barricade the site. (Photo courtesy of Shawn of the Atlanta Radio Control Club.)

Shawn said the destruction appeared to be retribution after protesters had requested access to the airfield’s parking lot for events for a “week of action.” He said the club told protesters they could not give permission because they believed the County controlled the lot. The club did not block the lot from access and avoided scheduling its own events at that time, he added.

The anonymous source familiar with the situation said that protesters may have incorrectly blamed the club for Millsap’s contractors using the airfield entrance to bring in a bulldozer for one of the controversial rounds of plowing that apparently were aimed at undermining the trespassing protesters.

The barricade included a direct insult at the club, Shawn said, with a sign reading, “Welcome, un-remote controllable.”

“I’m like, are you serious?” said Shawn of his reaction. “I thought we had a good relationship with them, but I must have been wrong. …You want us to jump through hoops and you don’t want to do anything for us.”

Those hoops included being photographed and questioned by protesters when entering the airfield, Shawn said. “You had to go through their checkpoint, which was worse than a military checkpoint, just to get into the park,” he said.

Shawn said another factor in the destruction may have been that one member spoke to the press and had protester signs posted in his yard. The club saw that as intimidation.

Thus, the club did not seek to retaliate in any way, Shawn said. A question, of course, is why the task force of federal, state and local police patrolling the area did not clear out the protesters until a mid-December raid that involved the terrorism charges. A source familiar with the property said many locals have been frustrated with the delay and that word is the County police department was a holdout on such confrontation.

Shawn said the club also wondered about the lack of a police raid and twice requested, but failed to get, meetings with DeKalb County CEO Michael Thurmond. But even now, he said, his own view is shaded by his experience that many of the protesters are not locals, a factor also emphasized by police agencies as a political narrative, and the expansion of protests to include the training center issue.

“My whole thing was, why would you let a bunch of people from out of state take over your county?” Shawn said. “I was like, if they were local, then let ’em be.”

He’s also concerned about the potential for more destruction or violence. “The key word is ‘defend the forest,’” he said. “Well, if you’re defending something you’re going to use some sort of violence.”

The impacts are already severe on his group, he said, which continues to show up for some flying, but is losing members and skipping its annual “fly-in” event for newcomers and statewide enthusiasts. He said the overall parkland – which is still used by the public despite the controversial swap – is also suffering a loss of regular visitors. Protesters, however, established what they call the Weelaunee People’s Park there and host public events.

“This is worse than the pandemic,” said Shawn. “At least in the pandemic you saw people out walking their dog… Now it’s completely dead.”

Shawn said he’s talking publicly now out of sheer frustration. He spoke in terms of a protest movement that is losing some hearts and minds locally due to destructive tactics.

“We’ve been walking on eggshells… but it gotten to point that I’m breaking the eggshells,” he said. “We’ve been very nice. We’ve been polite… and you still want to play with us?

“We’re not trying to down them, but now we’ve got to the point of, we don’t care about you anymore,” he continued. “We went from being neutral to we’re totally against what you’re doing because you’re not doing it right.”