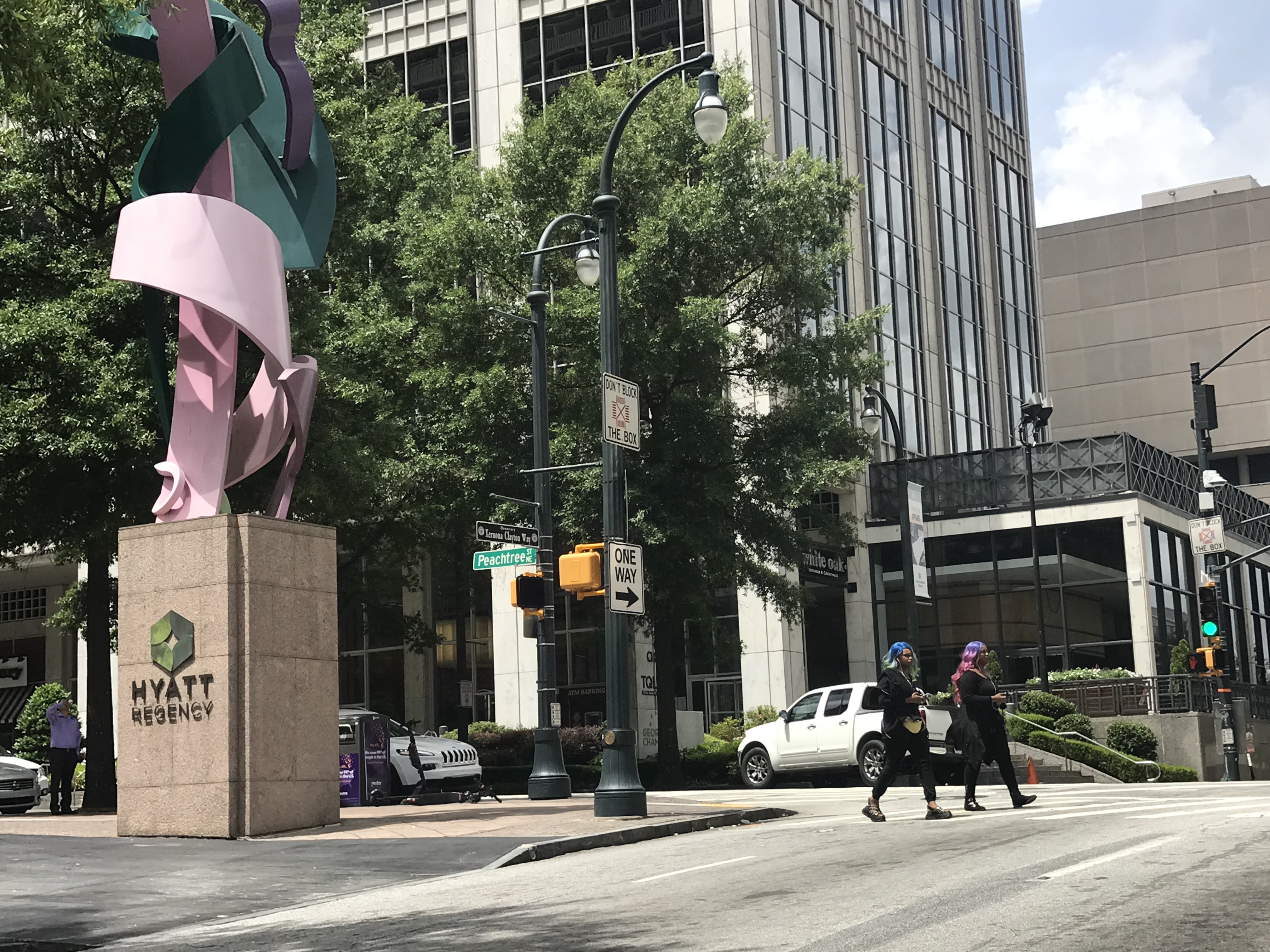 It all comes down to a simple fact. We are readjusting the way we are moving around in Atlanta. We are shifting from a car-oriented transportation network to one that includes multiple modes – pedestrians, cyclists, transit riders and users of the myriad of micro-mobility modes that have emerged on our streets, trails and sidewalks. 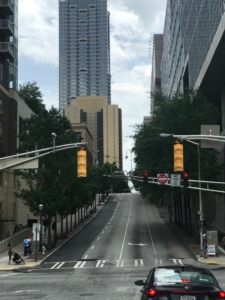 But not everyone is embracing the change – as we found out with the proposal to turn six blocks of Baker Street downtown from a one way corridor to a two-way street.

After the legislation was  approved by the Atlanta City Council in an 11-4 vote, Atlanta Mayor Keisha Lance Bottoms surprisingly vetoed it.

“A lot of concerns have been raised,” Mayor Bottoms said in a brief interview after the ribbon-cutting of the Atlanta BeltLine’s Eastside Trail north of Memorial Drive. “Out of an abundance of caution, I wanted to be sure we have addressed their concerns. We have an opportunity to take a step back, to give everyone the assurance that their concerns are being addressed.”

Asked if the two-way proposal was still on the table, the mayor answered without hesitation: “Absolutely.”

Bottoms said the is continuing to get input from the those who would be impacted by making all of Baker Street two ways – the residents, the business community, including downtown hotels among others.

“It is an opportunity to take a step back and make sure we have done our due diligence. We want to make this transition as safe as possible. There’s never any harm in slowing this process down,” said Bottoms, who added that she doesn’t have “over-arching concerns” about the proposal. 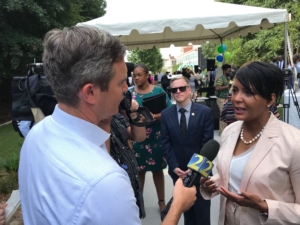 She also said she had met with Tim Keane, the city’s planning commissioner, to discuss her veto.

“Tim Keane is a seasoned professional,” Bottoms said. “I trust his judgement.”

One can attribute part of Atlanta’s changing transportation habits to the BeltLine – trails that serve pedestrian, cyclists, skateboarders, skaters, e-scooters, e-bikes and other means of movement.

As an example of how the BeltLine has changed our psyche, Mayor Bottoms admitted at the ribbon-cutting that 10 years ago, she had heard about the BeltLine “but I probably couldn’t tell you what it was.” Now it has changed the profile of Atlanta.

Downtown  is not the only area changing its focus from cars to pedestrians. 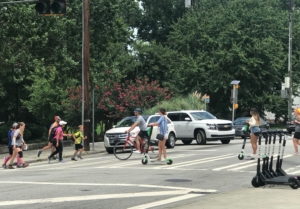 Kevin Green, president and CEO of the Midtown Alliance, recently revealed the results of an extensive survey of people who live and/or work in Midtown.

One interesting response was that “94 percent agree that Midtown is no longer a place to go through,” Green said. Instead it is a destination – a place to experience and enjoy. Green said there are 70 lane miles within the 1.2 square mile that makes up Midtown. Plans call for reducing only 8 percent of that space for alternative modes of transportation.

The survey revealed support for a shift in priorities.

When asked about which modes of transportation should be a priority, 96 percent answered walking; 90 percent said transit; 79 percent said cycling; 42 percent said dockless scooters and the lowest priority was cars with 39 percent.

Scooters were non-existent in Atlanta before May 2018. Today there are about 10,000 scooters offered by 10 vendors. It’s become a little bit like the wild, wild west on Atlanta’s streets. 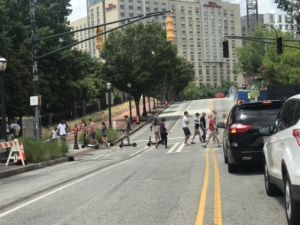 But at the monthly Sustainable Atlanta Roundtable event at Southface on July 12, there was consensus that the scooters are here to stay.

“It’s better to have a 40-pound scooter than a two-ton car” competing for space on our cities streets, said Shaun Green, senior transportation engineer for Atlanta BeltLine Inc. Green said that  just one of the vendors – Lime – had one million rides in just one year; and he added that 37 percent of scooter rides are replacing a car trip.

“The best part about scooters is that people are no longer as pissed off at bicycles,” Green said jokingly.

When it comes to scooters, the rules of the road and the sidewalk still need to be fine-tuned. Common courtesy goes a long way – no matter what mode of transportation one uses. And our streets need to be reconfigured to make them more welcoming to non-automobile modes of transportation.

My guess is that this micro-mobility revolution is in its infancy. As time goes on, my guess is that we will see different  kinds of electric vehicles that would appeal to the over-50 demographic – seated scooters or even mini golf carts.

They all will play a part as we witness that transition from cars to a multimodal transportation system. Micro-mobility modes are becoming part of the “last-mile solution” – filling in the gaps that exist because of our limited transit network. 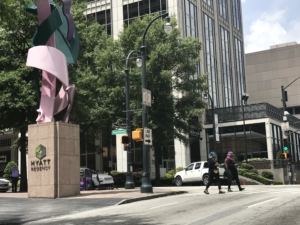 “How can we build a region where it’s easier and safer for everyone to walk and bike?” asked Byron Rushing, bicycling and walking program manager for the Atlanta Regional Commission, during the Southface panel discussion. “We need to build better streets. If there are no facilities for people to walk or bike safely, people are not going to walk or bike.”

An ARC study – “Walk, Bike, Thrive” – lays out the opportunities for the region. And it is not surprising that the change will begin in the city of Atlanta – where density and development is forcing a shift away from cars to alternative modes.

So it’s only a matter of time before Baker Street and several of our other one-way thoroughfares become two-way streets that are more inviting to those on foot, on bicycles or scooters. Complete streets, here we come. 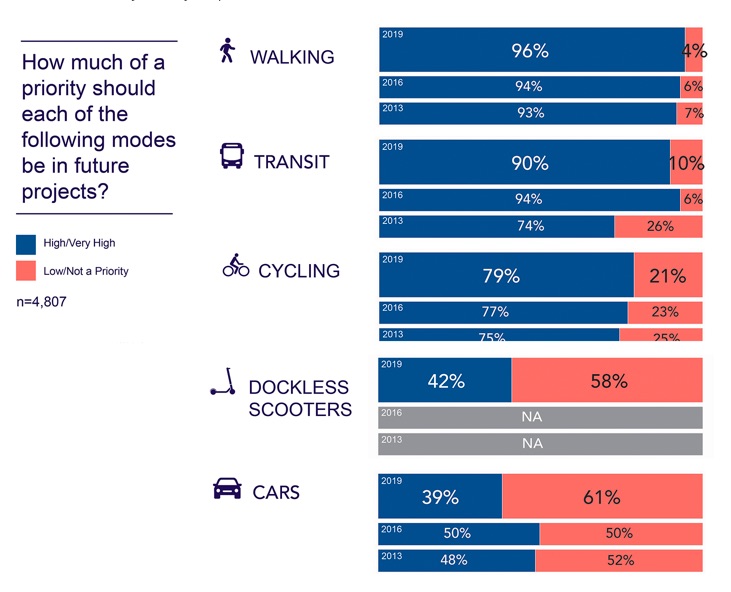 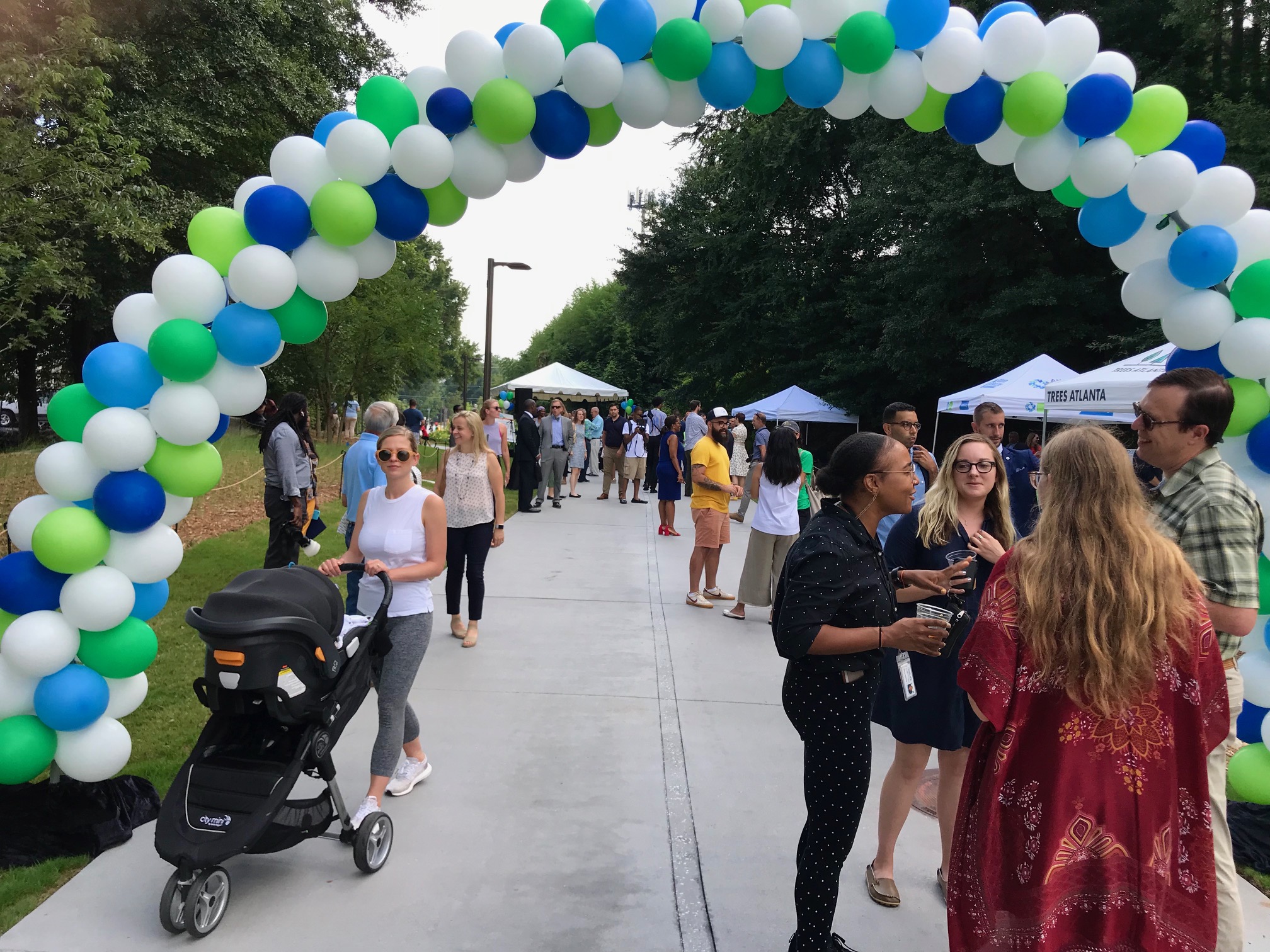 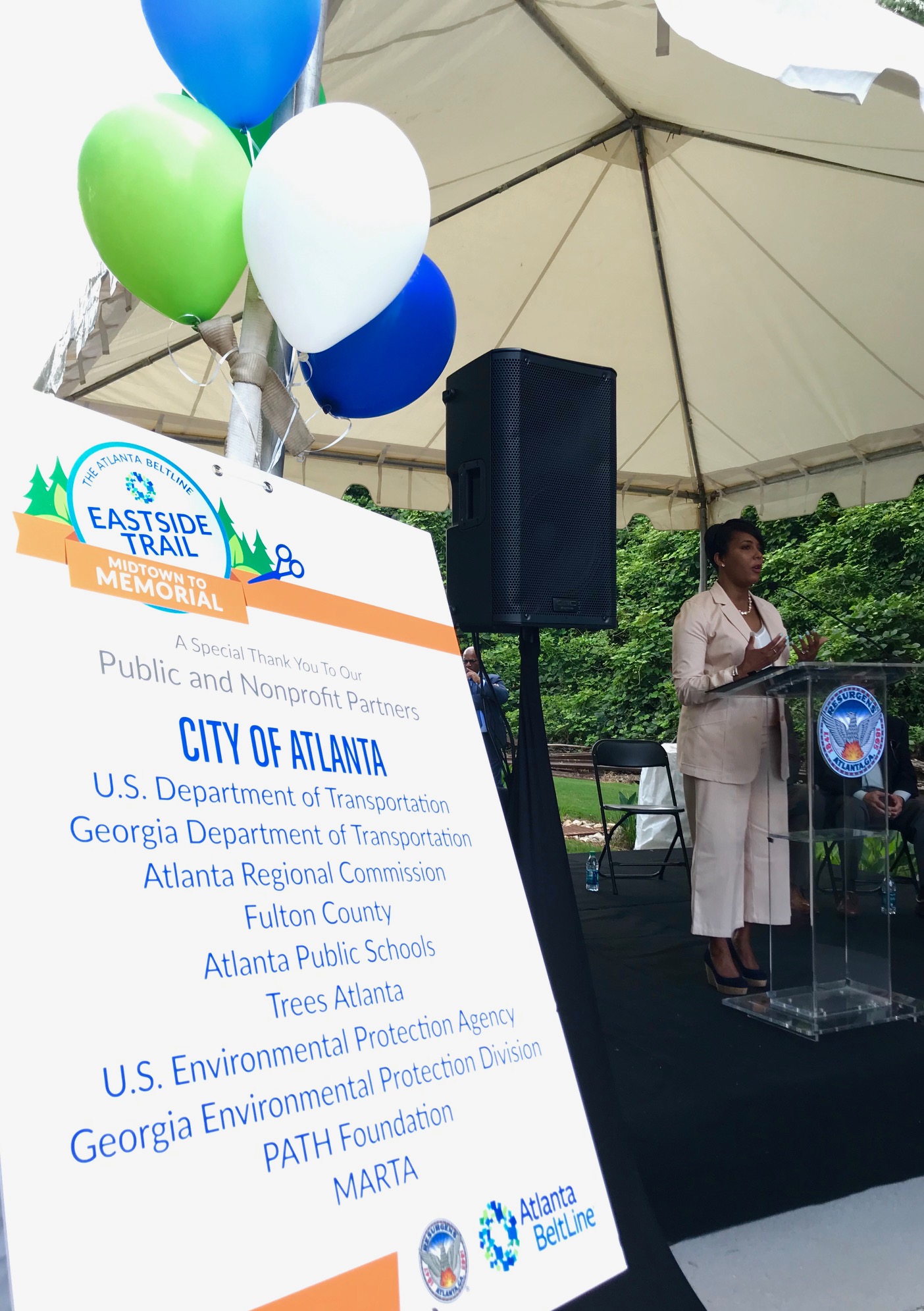 It takes a village. Poster shows the multiple partners that have made the BeltLine a reality. Mayor Bottoms admits that 10 years ago, she probably couldn’t tell you what the BeltLine was (Photo by Kelly Jordan)

Previous Article
World Refugee Day- Clarkston 2019 and 2018 Photos By Kelly Jordan
Next Article
Fulton looking to rent cells in other counties, as releases from jail slow