By Maria Saporta and Amy Wenk
Published in the Atlanta Business Chronicle on December 13, 2013

The Georgia World Congress Center Authority is planning to significantly improve Centennial Olympic Park as it approaches its 20th birthday.

The new strategic vision for the park will be to make it more welcoming to the city and the attractions that have grown up around the park in the past two decades.

The GWCCA also views Centennial Olympic Park as the convention center’s front lawn to its campus. By 2017, that campus will extend all the way to the new Atlanta Falcons stadium at the corner of Martin Luther King Jr. Drive and Northside Drive and it could include a new GWCC hotel.

One of the more dramatic features of the park’s new master plan would involve acquiring and replacing the Metro Atlanta Chamber building at the corner of Andrew Young International Boulevard and Marietta Street. 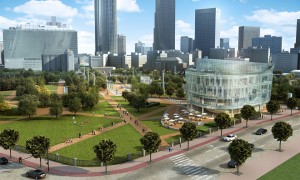 The GWCCA said the current Chamber building and its parking lot blocks the view of the College Football Hall of Fame — which is being billed as the convention center’s new front door.

But Frank Poe, GWCCA’s executive director, said any discussion of replacing the Metro Atlanta Chamber building with a taller structure on a smaller footprint is preliminary. “Right now we are at a point of looking at the possibilities of that location,” Poe said. “The Chamber is not necessarily interested in selling their building. Our approach is to look at it like a public-private partnership. At this point, we want to get the vision established.”

Sam Williams, the retiring president of the Metro Atlanta Chamber, said that over the years it has received several offers from people wanting to buy the building, and they have all been turned down.

Williams said that Poe did share the conceptual designs of the renovated park without the existing Chamber building.

“There’s not been a specific request put forward by the GWCCA,” Williams said. “We have entertained the possibility of a relocation in the park. But it would be at no expense to the Chamber. The location is an integral part of our brand. The ideas are fine, but the challenges are paying for it.”

Poe said the GWCCA’s idea of using a public-private partnership to relocate the chamber is still conceptual.

Joseph Skopitz, assistant general manager of Centennial Olympic Park, said the new master plan includes several elements that could be implemented in the short term without having to launch a major fundraising effort.

The proposed improvements in the “refreshed” Centennial Olympic Park would include: 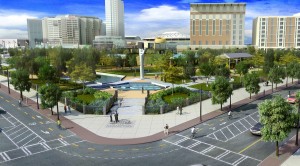 Creating a new gateway at the corner of Baker Street and Centennial Olympic Boulevard that would invite visitors to enter the park with an attractive entrance connecting the city, the sidewalks and the park.

Closing off International Boulevard from Centennial Olympic Boulevard to Marietta Street as a street and making that space a plaza that connects the Five Rings Fountain with the northern section of the park.

Replacing the existing park maintenance shed and offices on the northwest corner of the park (across from the Georgia Aquarium) with a new restaurant and event space welcoming visitors to experience the park in a new way.

Building a new band shell at the amphitheater space with possible seating for up to 2,000 people permitting ticketed events and protecting the stage and artists from the elements.

“Over the next seven to eight years, we want to make renovations to the park,” said Skopitz, adding that it would encompass the new attractions of the new Falcons stadium and the College Football Hall of Fame. “By 2020, we want to have a comprehensive new face for our campus of more than 200 acres. One of the big pieces is to open up the park. We had built green walls blocking the city. We want to have all these great overlooks to the park.”

Billy Payne, The Coca-Cola Co.’s CEO, Roberto Goizueta, and the Robert W. Woodruff Foundation — to have a gathering place during the 1996 Summer Olympic Games. 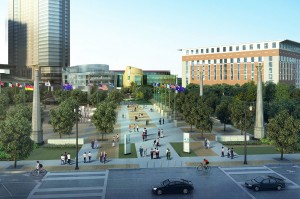 At the time, that part of downtown was run down with vacant buildings, surface parking lots and a downtown area that was off the beaten path.

Today, Centennial Park has become a magnet for the development of entertainment venues, restaurants, hotels, condos and apartments. A.J. Robinson, president of Central Atlanta Progress, has estimated that more than $2 billion in investment has occurred around Centennial Olympic Park in the past two decades.

The new investments include the Georgia Aquarium, the World of Coca-Cola, the College Football Hall of Fame, the National Center for Civil and Human Rights, the Omni Hotel Tower, Imagine It!, the Embassy Suites Atlanta, Hilton Garden Inn Atlanta and the Park Pavilion.

He welcomes the idea of an enhanced redesign of Centennial Olympic Park because “I think it will lead to another round of private investment around the park,” Robinson said. “The park is now the central gathering place of our downtown community.”

David Marvin, founder and president of Legacy Property Group, has been one of the key developers of projects around Centennial Olympic Park.

“I think the park is an amazing asset for downtown,” Marvin said. “It’s been a catalyst for the birth of the Luckie Marietta district and, effectively, defined the entertainment zone that exists around the park. When the park was originally designed, it had a little bit of a fortification mentality. … Over time, things have evolved.” 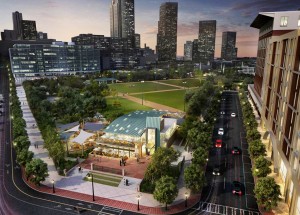 Marvin said he really hopes the GWCCA and park leaders will be more “engaging and embracing” of the surrounding neighborhoods. “Now that the neighborhood has grown up as a result, in part, of the park,” Marvin said, “I think the next vision for the park should respond to that.”

Barbara Faga, a landscape architect who was instrumental in the original design for Centennial Olympic Park, and the firm AECOM have been brought in to help with the redesign.

“I think it’s brilliant that the Georgia World Congress Center is thinking about refreshing the park after 20 years since it opened,” Faga said. ”Some of the proposals they’re come up with were part of the original design that were put on hold.”

One example, Skopitz said, was International Boulevard. “It originally was designed to be a plaza,” he said. “We artificially cut a road through it.”

By closing the street, the park will become much safer for children who are playing in the fountain so parents will not have to be concerned about cars driving by.

William Pate, president and CEO of the Atlanta Convention & Visitors Bureau, said improving the park will only enhance the experience for out-of-town visitors.

“From its early days as a meeting place for Olympic visitors, Centennial Olympic Park has evolved into the centerpiece of the city, where visitors begin their exploration of Atlanta,” Pate said.

Going forward, Poe said that with a completed campus strategic vision, the next step will be to visit with community stakeholders to decide on the implementation priorities.

“Realistically, it would be hard to say all of this would be done by 2017,” Poe said. “Our goal has been to create the vision for the campus and break it up into pieces. That may take us beyond 2017.”