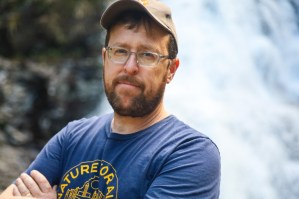 We know that parks bring people together; they’re where we gather with family, friends, and neighbors to play, explore, and relax. Park Pride’s vision is an Atlanta where every neighborhood has access to a great park because every community deserves to enjoy the health and wellness benefits that a quality, well-maintained park provides. 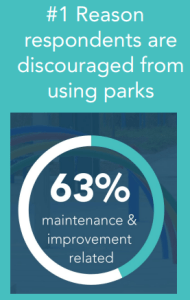 However, through the public engagement process that informed Activate ATL—the Department of Parks and Recreation’s 10-year master plan—we learned that some Atlantans feel discouraged from visiting parks due to maintenance issues and past-due upgrades. In fact, when asked through a statistically valid survey to identify the reasons that discourage them from using City of Atlanta parks, 63% of the responses were maintenance or improvement related. (left: graphic from Activate ATL virtual public meeting presentation.)

Making sure that every neighborhood has access to a great park is not just about creating new parks or adding new park amenities; it’s about addressing the punch list of improvements that are needed within existing parks. This includes, for example, replacing old benches, fixing cracked sidewalks, refreshing planting beds and pruning trees, replacing broken lighting, removing graffiti, and much more.

These small improvements, I believe, are just as important as the large. Approaching park improvements comprehensively by following through on both large and small upgrades can transform a park that feels underutilized into a welcoming and activated community space.

I am excited to share that Park Pride is exploring opportunities and partnerships to increase public and private funding through our Grantmaking Program to make more comprehensive park improvements a reality. In May, Atlantans supported the passage of the Moving Atlanta Forward bond packages, which include dollars for infrastructure improvements in a portion of the City’s existing parks. In reviewing the project list, which was adopted unanimously by Atlanta City Council in December 2021, many of the park improvements identified are “big ticket” items, including playground replacements, boardwalk renovations, turf fields, and restrooms, for example. Further, the bond packages provided discretionary funding to Atlanta City Council to address infrastructure issues within each district. This funding could potentially be used to advance the smaller park infrastructure projects and deferred maintenance needs that have not been specifically named in the bond package.

It is important to note that private dollars awarded through Park Pride’s Grantmaking Program are not available for deferred maintenance. However, working with the City of Atlanta, we believe there is an opportunity to pair the dedicated and discretionary funds of the bond package with private funds through our Grantmaking Program to make more comprehensive park improvements possible, thereby catalyzing real quality of life enhancements in the communities served. Taken as a whole, an effort to strategically and intentionally refresh our parks—completing both large and small projects concurrently—could transform our park system and the way we feel about our beloved parks and greenspaces.

At Park Pride, we understand that well-maintained parks foster civic engagement, trust, and neighborhood pride. We also understand that great cities don’t just do the big things well: they do the small things well, too.  And that includes parks. We stand ready to be a partner to the new Commissioner of Atlanta’s Department of Parks & Recreation and to Atlanta City Council to help to execute the big and the small improvements to Atlanta’s parks, and to see our vision of an Atlanta where every neighborhood has access to a great park come to fruition.