A Shared Space for the Beloved Community

In this year of the unexpected and the long overdue, our community has been tested. Life as we know it has morphed for the time being and honest conversations about what kind of city we want to be have bubbled up in living rooms, social media feeds, and here at City Hall. But if one thing has become abundantly clear it is that people must come first. Always. This has long been Atlanta’s legacy and aspiration to becoming the Beloved Community, affirmed in the Atlanta City Design but powerfully renewed by recent experiences. For these reasons we are setting out to reimagine Downtown’s Peachtree Street as a shared space that not only moves people but also sets expectations for the future of Atlanta’s public spaces as inviting, uniting, and welcoming places for everyone. 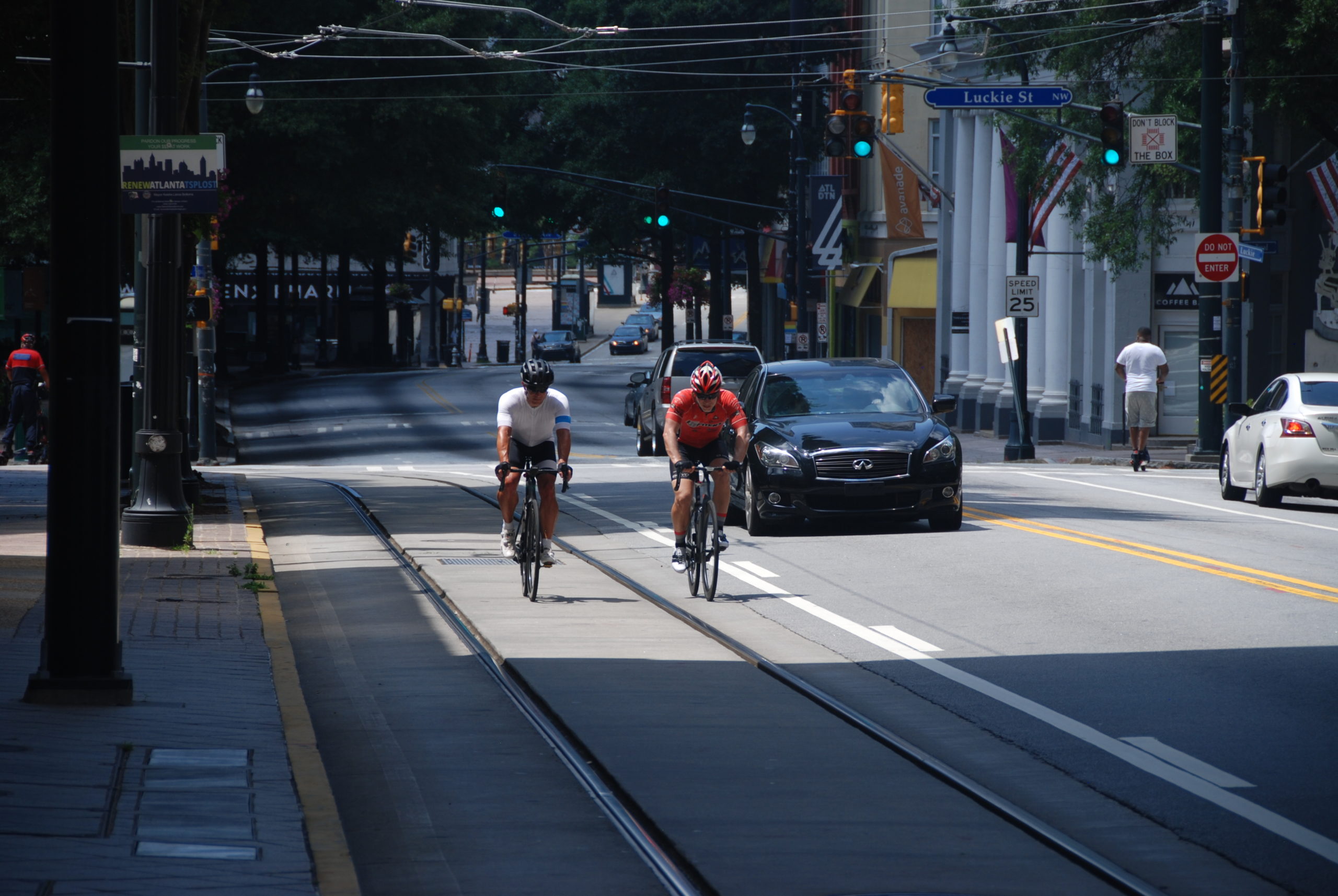 Peachtree Street began as a Native American trail, grew into Atlanta’s “main street” during the Reconstruction Era, and experienced periods of growth and decline throughout the 20th Century. It has established itself as the spine of our city in whatever form it has taken over the years, yet most days today Peachtree Street does not meet its potential as the active and inclusive public realm we aspire to. It is still a place for parades, popular road races, and protests and demonstrations, but struggles to maintain that level of activity on an average day. The way that it functions is no accident. A history of racism, intentional design decisions, privatization, disinvestment, the rise of car culture, a focus on hotel and office development, and shifting lifestyle preferences have all played a role in this loss of vibrancy. For a long time, these efforts encouraged exclusion and reinforced a perception that streets are to be passed through quickly rather than centers of community activity to be joyfully experienced as part of city life.

It’s time to reverse that course. As we experience a new wave of growth, we need Peachtree Street, and all of our public spaces, to be recreated as exceptionally designed places for all people every day. Exceptional and inclusive public spaces are powerful but at the same time accommodating. They honor the stories of a place through art, material, and activities, giving us all an opportunity to see ourselves when we see Atlanta. Most importantly, they are where we come together as a community.

Two years ago, we began to reimagine Peachtree Street as a shared space that will bring that kind of exceptional public space to Downtown Atlanta. Redesigning conventional streets as shared spaces is a relatively new idea that de-emphasizes the role of streets for traffic by slowing the pace of travel and desegregating pedestrians, bicycles, transit, cars, and even e-scooters in favor of emphasizing design features that will add activity and vibrancy to the public realm of our city. Successful design of these spaces requires paying attention to three main elements: activating public spaces, supporting thriving and welcoming development, and facilitating safe mobility for all users. This effort, the Peachtree Shared Space Study, will test the feasibility of that idea and push the conversation about the design of our public spaces throughout the city.

That we have the courage to engage in the difficult conversations about the design of our public spaces is so incredibly important now more than ever. The COVID-19 pandemic made us reconsider what could be done with our streets. Ideas about “open streets” have sparked a debate about the equitable use of our public spaces in a time of crisis. This debate was amplified with the recent killings of Breonna Taylor, George Floyd, and Rayshard Brooks and Ahmaud Arbery here at home. We are compelled to confront the persistence of racism and exclusion in all aspects of everyday life. The protests and demonstrations compel us to reconsider the equitable design and investment in what should be our most democratic of public spaces: the streets where these have taken place. It’s no coincidence that our disinvestment in the public realm can be traced to the beginning of integration; the Peachtree Street shared space is an opportunity to finally change that course, beginning with our most recognized street.

We invite you to join us on this next part of Peachtree Street’s journey. Our team is working thoughtfully to create ways for you to get involved in this work. We hope the process of designing this space will reflect the kind of place we want it to be: an inclusive, welcoming embodiment of Atlanta’s identity. This will include online activities at the beginning with the hopes that we will be able return to face-to-face engagement for a demonstration project on Peachtree Street in early 2021, as it becomes safe to meet together again.

We hope you will join us and extend the invitation to your families, friends, and neighbors to help us shape the next generation of public life in Atlanta. Let’s start creating better public spaces for everyone, together. Let’s start with Peachtree Street.