A slice of Americana, the black powder longrifle, to make annual appearance 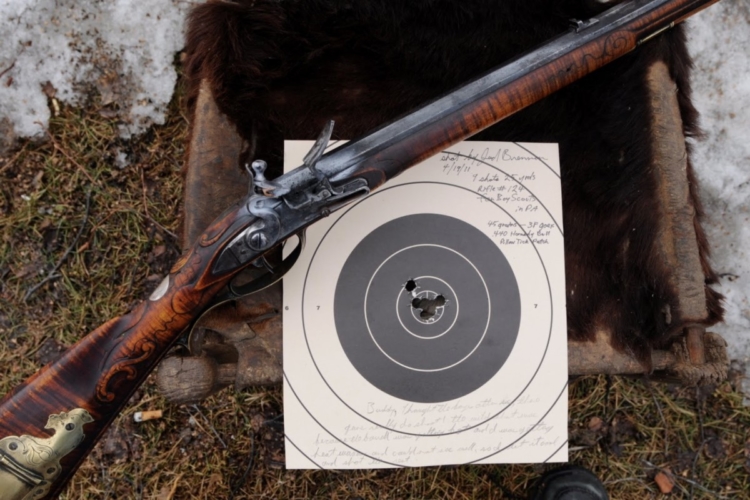 The holes in the target were created by nine shots fired from a distance of 25 yards by Alaska artisan Judson Brennan, who made the weapons. The inscription to a Boy Scout Troop in Lebanon, Penna. notes that Brennan wanted the boys to know the gun delivered a precise round. Credit:

The otherworldly sound and smoke of black powder weapons will move from the fields of historic reenactments to the hunting tracts of Georgia next weekend, as thousands of hunters armed with muzzleleaders are expected to head out in search of deer. 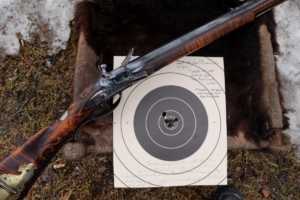 The holes in the target were created by nine shots fired from a distance of 25 yards by Alaska artisan Judson Brennan, who made the weapon. The inscription to a Boy Scout Troop in Lebanon, Penna. notes that Brennan wanted the boys to know the gun delivered a precise shot. Credit :judsonbrennan.blogspot.com

This early start of deer season that’s reserved for primitive weapons is a rite of passage for those hunters who will reach for the type of weapons made famous by fictional characters who run deep in the U.S. psyche. Among them is Natty Bumppo, the hero of James Fennimore Cooper’s Leatherstocking Tales. Bumppo wielded a gun named Killdeer and was such a crack shot that one of his nicknames was Deerslayer.

Georgia is among the states that open deer season earlier for muzzleloaded weapons than modern rifles. Perhaps, muzzleloaders aren’t as precise as modern rifles and their users are granted an advantage over hunters with modern weapons. Perhaps precision with a black-powder weapon is a lost art for some of the 41,000 hunters estimated hunted by the state to have hunted last year with muzzleloaders.

The state gives hunters wielding muzzleloaders a one-week jump before the deer season opens for regular firearms. The season for primitive weapons opens Oct. 13, followed by the opening for modern weapons on Oct. 20.

Hunters who use bows and arrows have a real jump on the rest of the field. Bow season opens Sept. 8. The deer season for hunters regardless of their weapon of choice closes Jan. 13, 2019.

Muzzleloaders are the weapons that factored in the Revolutionary War and the nation’s subsequent westward expansion. They’re the kind that factor in the poem Robert Frost read during the inauguration of John F. Kennedy. The Gift Outright begins with the lines:

“The land was ours before we were the land’s./

“She was our land more than a hundred years/

“Before we were her people….

And concludes with the observation:

“Such as we were we gave ourselves outright/

“(The deed of gift was many deeds of war)/

“To the land vaguely realizing westward,/

The lore of the muzzleloader includes Daniel Boone, the frontiersman who carried it into present day Kentucky. There, and in the Battle of New Orleans, the name apparently morphed from the Pennsylvania rifle, named for its production in towns including Lancaster, to Kentucky, because of its ubiquitous presence in the Bluegrass State and as the weapon of choice of Kentucky shooters.

The modern day Kentucky Rifle Association proclaims on its homepage that, “Not only is the American longrifle a significant historical artifact, it is also one of the finest forms of pure American art ever produced by this country.”

The lore and legend that surrounds the gun has created a place of near reverence for a Capt. G.W. Dillin, who wrote a book described as the seminal piece on the Kentucky rifle, duly named The Kentucky Rifle. First published in 1924, the book has gone through six editions, includes 126 illustrated plates and now sells on amazon.com at prices ranging from about $55 to $140.

Dillin’s oft-quoted description of the weapon reads, according to an account on grandviewoutdoorworld.com: 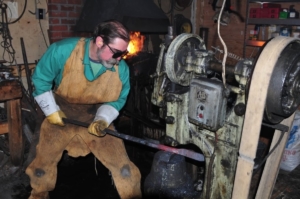 Alaska artisan Judson Brennan makes longrifles and other primitive weapons at his shop and forge at his home on Tenderfoot Hill, located about 29 miles north of Delta Junction, Alaska. Credit: judsonbrennan.blogspot.com

Previous Article
Critics rallying to “Redlight the Gulch;” call it a bad deal for Atlanta
Next Article
MARTA’s surplus property: Managing excess a challenge in its own right