A transit tale of two counties – Clayton looks to MARTA; Cobb looks away

While Clayton County weighs the all-important step of whether to place a MARTA tax on the ballot in November, Cobb County commissioners seem to be back-pedaling on any plans to implement more transit access from the county to the rest of the region.

The Clayton County Commission is scheduled to vote on July 1 on whether to ask voters in November to approve a referendum for either a one percent or a half percent sales tax to join MARTA. A penny sales tax is expected to generate about $49 million a year, and it would likely be able to support both rail and buses. A half-penny sales taxes would generate half of that amount and would only be able to support a bus system.

In Cobb County, leaders appear to have given up any possibility of connecting the northwest county and the existing MARTA system with a light rail line. Most of the conversation in the past year has centered on a bus rapid transit line that would go from the Arts Center MARTA station to Kennesaw State University; and the most recent plans have called for a BRT-lite system that would be cheaper to build but would be more like an express bus line than a true BRT with a totally separate right-of-way.

Either way, three of the five Cobb County commissioners as well as most of the candidate running for the commission have said they oppose using $100 million of the county’s proposed Special Local Option Sales Tax (SPLOST) to help pay for a bus rapid transit line.

What an amazing crossroads for our region – depending on the decisions that are currently right in front of us – it could determine the destiny of how we are going to grow for decades to come.

And right now, I’m betting on Clayton County on coming out on top in the long run.

If Clayton voters agree to join MARTA, it will become the third county in more than 40 years to join what had originally be planned in the 1960s to have been a five-county metro-wide transit system.

If Clayton votes for the full penny sales tax, the county, which has been without bus service for several years, could have rail service within the next five years.

In short, if Clayton County voters were to approve a MARTA sales tax in November, it would revive the commuter rail plan that has been languishing for years, if not decades. 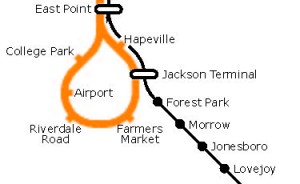 According to a map that has been circulated by the Citizens for Progressive Transit, Clayton County would be instrumental in connecting the southern crescent of our region along the Norfolk-Southern train tracks.

The rail line would connect with the existing MARTA line at East Point and run along the east side of Hartsfield-Jackson International Airport, parallel to Interstate 75, with stops in Hapeville, the Maynard H. Jackson International Terminal, Forest Park, Morrow and perhaps Jonesboro and Lovejoy.

The rail service likely will be supplemented with bus service from various points in the county, giving residents an opportunity to get to jobs, stores, schools, universities, the airport among other spots without having to rely on a car. It will give people living in one of the poorest counties in the Atlanta region choices on how to get around.

A combination of rail and bus transit with direct connections to Hartsfield-Jackson and Atlanta will make Clayton County much more competitive in years to come.

Not only will the county become a more desirable place to live for people who like to have transportation choices, it will become more attractive as a place for companies to invest because it won’t be saddled with the traffic congestion found in counties in the north metro area.

Cobb, unfortunately, still appears to be stuck in the same transportation mindset that it has had for the past 50 years ­– one of cars, trucks, highways, roads, arterials and a few Cobb County Transit buses thrown in.

By not offering a multitude of transportation options — namely a robust transit system that includes rail, Cobb will find itself at a competitive disadvantage in the region.

Already the areas of North Fulton and Gwinnett are much better positioned to benefit from an expansion of MARTA, if and when the time is right. Looking at the MARTA rail map, transit lines already extend to their front doors.

A dear friend of mine who lives in Cobb County explained to me why he did not support the passage of MARTA back in 1971. It would have taken nearly 20 years before MARTA rail would have been able to start serving Cobb County.

My answer to him was simple. If you had passed MARTA, you would have been part of the Atlanta region’s public transit network for more than 20 years. Today, it’s highly unlikely Cobb will see rail transit for another 20 years given the sentiment of its electorate and its decision to invest $400 million in a redundant baseball park rather than in a world-class transit system.

Already, demographic trends have been moving toward central cities where people can live and work in walkable urban areas that are well served by transit.

While Cobb is still arguing about the drawbacks and costs of transit, Clayton County has a wonderful opportunity to invest in the economy of the future.