Plaza Fiesta on Buford Highway in Chamblee is one of the area's famous and beloved multicultural malls that could see talk of historic recognition in a new effort by Historic Atlanta. (File Photo from Peachtree Gateway Partnership.)

A trailblazing effort is gearing up to identify and protect historic sites connected with metro Atlanta’s Asian, Latino and immigrant communities.

That quest, spearheaded by a nonprofit called Historic Atlanta, is likely to include a focus on the famously diverse communities along Buford Highway, where it may bolster an existing oral history project and nascent historical programs in such suburban ITP cities as Brookhaven and Chamblee. In places where preserving single-family houses may still be something of a novelty, progressive talk of honoring nontraditional cultural sites like the Plaza Fiesta shopping mall could be on the horizon. 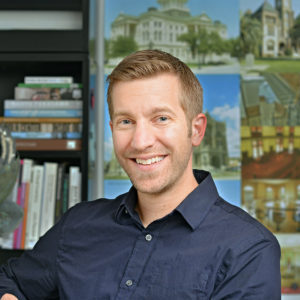 Charles Lawrence, chair of the board of directors of Historic Atlanta. (Special.)

Charles Lawrence, Historic Atlanta’s board chair, says the goal is “to shed light on these ignored and forgotten histories. Certainly in Atlanta, the Asian, Latinx and/or immigrant communities — there are no recognitions for historic spaces associated with those communities… It’s one of those unfortunate aspects of our modern times [that] we are realizing we have done a terrible job of providing equity in recognizing historic spaces.”

Historic Atlanta does that work through permanent advisory committees whose volunteer members operate more or less independently, identifying historic people and places, then suggesting programs to commemorate or protect them. The Special Committee on Black Heritage, the first to form, has been involved in such efforts as saving Morris Brown College’s Fountain Hall. Another committee on LGBTQ history recently secured Georgia’s first-ever state historical marker commemorating gay rights or culture, which will be installed next year in Atlanta.

Next up is forming the committee on Asian, Latino — Historic Atlanta is using the gender-neutral form “Latinx” — and immigrant history. A Historic Atlanta board member will serve as chair and a committee member as co-chair. Committee members will be asked to meet virtually once a month and to work on a preservation plan and collaborate with other groups on their own time. The goal is to begin meetings in January. An application form is available on the group’s website.

The membership pitch uses immigration — going back to Jewish and Greek communities of the early 1900s — as the historic connective tissue for the committee’s work. Lawrence says that’s partly intentional due to the particular lack of preservation attention, but is also not restrictive on how the committee can choose to define and identify historic places. “The end result may be that we find one community or one sort of specific goal within one community, and that becomes our target effort to begin with,” he said.

The work could begin almost anywhere, says Lawrence, who noted that the City of Atlanta has only one park — Sara J. González Memorial — dedicated to someone of Latin American heritage. “And other than that, I don’t think there’s any historic markers or any sort of place that’s given any kind of historic recognition,” he said. “And it’s so important, especially for immigrant communities, because I think it’s a pretty standard bias for immigrants to be thought of as sort of placeless people… [T]here have been non-European immigrants in the city of Atlanta since its founding and these people have played a really important role in all facets of how Atlanta became what it is.”

At the same time, Lawrence, who is white, acknowledges he “struggled” with the concept of squeezing Asian, Latino and immigrant history into one committee. “It probably reflects some of the inherent biases in how we think about those different communities… [T]here are absolutely, certainly folks of Asian and Latinx heritage who have more generations in the United States than I do,” he said. “So to sort of group those folks in with folks who are first- [and] second-generation immigrants… may be very inappropriate.” And of course, “Asian” and “Latino” encompass multinational, multiracial and multiethnic communities — “this massive catch-all that doesn’t do justice to the varied nature of the different groups.”

“But at the same time, we need to start somewhere,” Lawrence says. “My hope is we get so much interest, we drill down and begin to address how we approach these specific communities.”

For a small organization with “Atlanta” in its name, geographic scope is another issue. For example, the DeKalb County city of Clarkston, roughly 3 miles east of Atlanta, is famously diverse as a welcoming resettlement place for international refugees for a half-century. “Are we going to advocate for preservation of places as far out as Clarkston? I don’t know,” said Lawrence.

The group has roughly defined its operating boundaries as inside the Perimeter. That does include much of Buford Highway, another massively diverse community that has attracted immigrants from scores of countries for decades. It includes residential neighborhoods and commercial centers along the road, which runs through Brookhaven, Chamblee and Doraville. 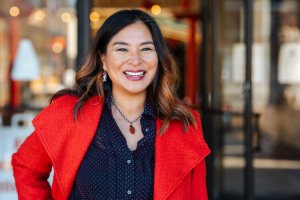 In that car-oriented area, strip malls are a focus of business and community life. Lawrence said Historic Atlanta has already talked about such shopping centers as Pinetree Plaza in Doraville, Plaza Fiesta in Chamblee and Northeast Plaza in Brookhaven. “And they all are potentially threatened because there’s very little understanding outside the community about the importance of these places,” he said.

One group that understands very well is We Love Buford Highway, a five-year-old nonprofit dedicated to preserving the multicultural community amid gentrification pressures and other challenges. The organization has an oral history project that records the memories of local people from immigrant and refugee families, created in partnership with the Asian American Journalists Association and the library systems of Georgia State University and DeKalb County. That work is part of the group’s mission principle of “Story,” which Executive Director Lily Pabian calls a “cornerstone initiative” designed “to raise awareness of this community’s significance in the history of Atlanta, the South, and of this country’s collective immigrant experience.”

“We want to take that oral history and start connecting it to physical places” for possible preservation, Lawrence said, describing early conversations with We Love Buford Highway.

“We welcome collaboration and partnerships, those that are aligned with our organization’s strategic goals and core values of how we serve the local immigrant communities of the Buford Highway corridor,” said Pabian. “And of course, where both parties can bring respective data points, perspectives, and resources to a mutual table for a productive and purposeful plan. We welcome the outreach.”

How and whether local cities might partner in such an initiative remains to be seen. Within Atlanta, Historic Atlanta has a powerful partner in the City government, which has robust codes allowing for the preservation of historic districts and landmarks. Most suburban cities have few or no such tools. And some get spooked with talk of such formal protections, even though they all have zoning restrictions of some sort already. “The idea of adding a couple more layers of review or oversight via a historic preservation ordinance, it’s just like the straw that breaks the camel’s back every time,” he said. “And it’s a very angry camel.” 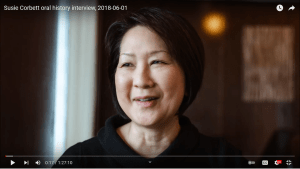 Susie Corbett, a member of one of the first Asian families to live on Buford Highway, as shown in an oral history recording on YouTube created by a We Love Buford Highway program. (Youtube.)

Chamblee is an old railroad city known for its historic downtown, but it has no such formal preservation protections in place, according to Assistant City Manager Mercy Montgomery. City code does have a provision for creating a historic district with design restrictions, but it has never been used, and its language only applies to houses. In 2017, private citizens established the first local historic district on the National Register of Historic Places — the Longview-Huntley Hills neighborhood — which is an honorary designation providing eligibility for tax credits and similar assistance but no restrictions on such property changes as demolition.

Brookhaven is where the tension between development and preservation of the Buford Highway community may be the highest at the moment and where policies are changing fast. The City recently opened a BeltLine-style trail on Buford Highway called the Peachtree Creek Greenway that has sparked fear of gentrification and includes a new police and courts headquarters directly behind Northeast Plaza. Most dramatically, the City in 2017 secretly bid on Amazon’s headquarters in a national auction by offering up a large section of Buford Highway, including Northeast Plaza. Conceptual illustrations showed the local shops and international grocers replaced with skyscrapers served with “Asian-inspired” food trucks and a “community banana stand.”

At the same time, Brookhaven is working on housing affordability policies largely aimed at avoiding mass displacement of the community — though development is moving at a faster pace thus far. And now the City is also working on equity-minded historic designations. 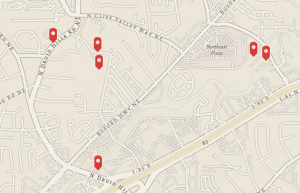 A detail of an online map of Brookhaven’s historic resources.

After last year’s Black Lives Matter protests, the City made its first-ever honorary historic district designation to the historically Black neighborhood of Lynwood Park. This year, it launched a historic resources inventory intended to serve as a basis for future preservation programs; along Buford Highway, the inventory so far includes only schools and places of worship, not shopping centers. For the City’s 10th anniversary in 2022, it is spending $40,000 to hire a historian to round out some of that work.

In addition, the City’s Arts & Cultural Commission in January will propose designating Buford Highway within Brookhaven as a “Cultural Corridor,” according to City Councilmember Joe Gebbia, who has represented the area for nearly a decade. The current language of that proposal says it is intended “to promote and preserve the multi-cultural heritage of the Buford Highway Corridor through the celebration of arts and culture.”

“As the ACC continues to implement its work program, the historic resources of the Buford Highway Cultural Corridor will be reviewed,” said Gebbia.

The New Year could bring a dovetailing of all of these efforts. We Love Buford Highway has spent the past 18 months as a radically transformed nonprofit providing thousands of people with food and vaccinations in the current history-making moment of the COVID-19 pandemic. Now it’s ready to get back to that reason we record history in the first place.

“As we plan for 2022,” said Pabian, “our strategy pivots us back into the overarching purpose behind Story and to foster safe spaces for our communities to share and see themselves, a place where their voices experience power for themselves and for each other.”