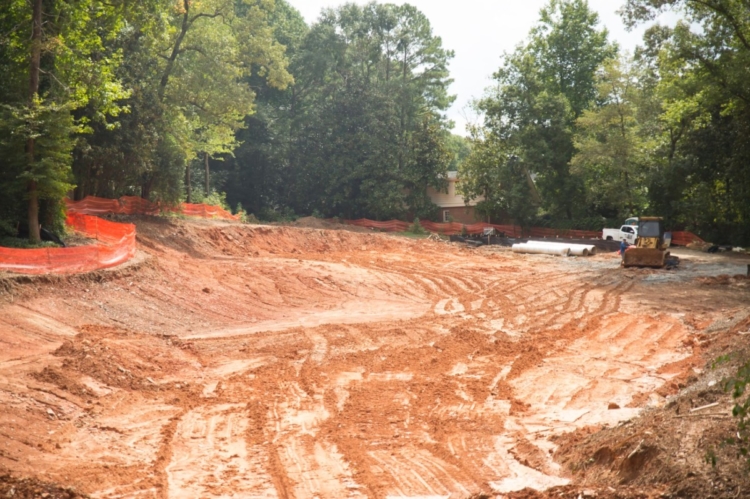 By Guest Columnist LINDSAY WILLIAMS BELLASI, who became a tree activist following a clear-cutting incident in her Northwest Atlanta neighborhood

As I drove home one summer night down West Wesley Road, a large dark shadow swooped in front of our car. “Wow!” shrieked my 5- and 6 year-old boys from the backseat. “Did you see that?” It was a huge owl – probably with a wingspan of 6 feet or more. We added it to the animal bingo board game we play, not realizing that some of the bird’s habitat in our neighborhood was about to be obliterated. 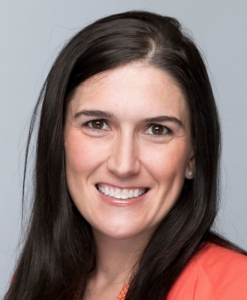 In our neighborhood of Margaret Mitchell, it’s not uncommon to see deer, foxes, owls, snakes, hawks and more – sometimes all in the same day. This is what makes Atlanta special and unique – the lush tree canopy that is home to these beautiful creatures within just miles of a major metropolitan center.

I admit, growing up here, this is something I took for granted and never really thought about. Out-of-town friends always marveled at the lush vegetation, and I just assumed all cities were like ours until I started traveling and lived elsewhere – now I know it’s unique – but also in grave danger of disappearing. My rude awakening from this oblivion was two months ago.

Driving to drop the boys at summer camp early one morning, the three of us witnessed a sight I’ll never forget: A wooded lot, of 2 acres or more, on West Wesley being bulldozed out of the blue. Huge, healthy oak and pine trees crashed to the ground one after another. By the time I picked the kids up that afternoon, every tree was gone. The stretch of forest we passed every day and assumed would always be there was now a huge gaping hole of red clay. It was shocking, devastating and left us all speechless.

In the weeks that followed, the lot became a source of intense discussion around the neighborhood. Every time I drove by, I saw walkers and joggers pause in front of the lot, jaws-to-the-ground, in awe of the situation. Comments on the neighborhood Nextdoor online thread included: “How awful! How could this happen?” “How could someone be allowed to do this!?” “This doesn’t happen in our neighborhood!” “How did we not know about this?” “I never saw permit signs!” Feeling furious yet inspired by the common sentiment, I decided to get some answers. 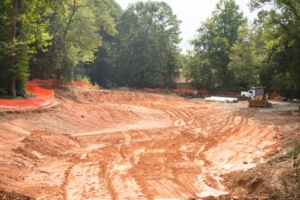 In the weeks that followed, a concerned, former Margaret Mitchell neighbor and photographer captured photos of the lot (which by then had become a huge mud pit causing major run-off issues for neighbors). I contacted our city council representative, who quickly responded and connected me with the city arborist and urban planner. The fast response felt promising, but this feeling rapidly turned to anger, frustration and even guilt with the answers I received.

It turned out, according to city officials, the development was presented at our Neighborhood Planning Unit meeting months before and there were signs posted for a few days regarding the development and the removal of trees. How did I, and others, not know about this or notice the signs (although, admittedly, I wouldn’t have known before then what they were for and what to do to help stop it). After further persistence over email with the city, and help from neighbors familiar with construction laws and procedures, “Stop Work” signs appeared at the lot one day.

As it further turned out, the developer had violated a number of provisions: Surpassing the amount of land grading permitted; failing to take the necessary precautions to prevent run-off into the sewers; failing to post building plans and, according to the city arborist, appearing to have surpassed the number of trees permitted for removal.

While the red signs and work stoppage felt promising and sent the message to the developer that the neighborhood was now watching and they better be more careful and respectful, they can’t bring back the old trees. Construction resumed a few weeks later. 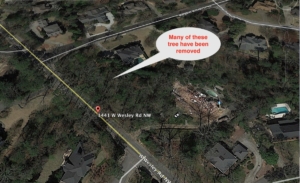 Many of the trees on the southeast corner of West Wesley Road and Margaret Mitchell Drive have been removed to make way for future residential construction. The site is about a mile south of OK Cafe, on the west side of I-75. Credit: Google Earth (March 2018), David Pendered

Then it hit me – the issue isn’t this developer, it’s the city ordinance. After further investigation, I learned the lot was approved for removal of 61 trees, to be replaced by 16. What? That’s crazy! Sixtyone mature trees taken out and 16 saplings planted – and if the builder surpassed this amount, a fine of a few hundred dollars per tree was to be imposed. That’s peanuts for a developer flipping a property of about $900,000 into a site that’s to accommodate two or three multi-million dollar Buckhead homes.

This isn’t an ordinance. It’s just a simple building fee. Why would a developer invest more to preserve and build around old oak trees versus paying a lower fine to knock them down and start from scratch? If the developer’s objective is to make money and doesn’t care about the impact to the wildlife, tree canopy or neighborhood aesthetic, of course the company choose the fine every time! It ain’t rocket science that there’s a problem here, folks.

So now what? The foundation of the houses is now being laid on the barren lots and the uproar among neighbors is dying down – walkers and joggers don’t pause much anymore to stare in horror, and comments have shifted to, “It’s so sad,” and, “It was going to happen sooner or later, I guess”.

I still find myself infuriated at the lack of respect the developer has shown to Mother Nature as well as our neighborhood. Despite the “Stop Work” episode, building plans have yet to be posted on the site as required by law, although the builder did go to extra trouble to post more than 10 “No Trespassing” signs all over the property. I’ve sent multiple follow-up emails to the city requesting transparency of the situation and of the tree report and what the consequences will be to the developer – but to no avail. Don’t get me wrong—I’m not against development entirely, but I believe in responsible development that is respectful to the community and to the environment. 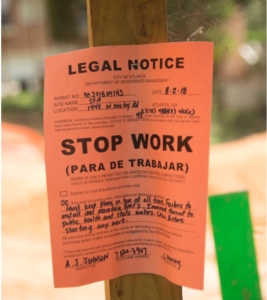 However, I must stop myself from focusing on the developer. I’ve come to realize that the gaping red clay hole and bright orange construction fences Margaret Mitchell residents drive by now must be a wake-up call. With the current economy driving more people to move to intown neighborhoods, this can – and will – happen again in our neighborhood, as it does across the city every day. It’s just a matter of time. It’s a symptom of a much larger problem with our city tree ordinance that must be addressed.

Moving ahead, my energy now shifts to driving awareness of any future potential developments in the neighborhood in order to try to prevent future clear cutting. I’m learning a lot – like, apparently, you’re supposed to call 911 if you’re ever concerned about trees being removed, and neighborhood associations can be the best avenue to bolster the power of collective voices. I’m surely going to make an extra effort to be on the lookout for tree removal/building permit signs and attend NPU meetings to make sure our concerns are heard earlier in the process next time.

Most importantly, I cannot let my own complacency to set in as the dust settles on this lot. Every time our family stops the car to watch the deer near Nancy Creek, I’m reminded how special our “City within a Forest” is. However, we can no longer take it for granted.

We must push to change Atlanta’s tree ordinance to protect our beautiful heritage for the next generation instead of letting builders take the easy way out and bulldoze at will with little or no penalty. This situation has shown me that it will likely take time and a heck of a lot of persistence, but I for one am not giving up easily. Who’s with me?

Note to readers: Lindsay Williams Bellasi is a native Atlantan with a career in consumer insights and marketing/growth strategy. 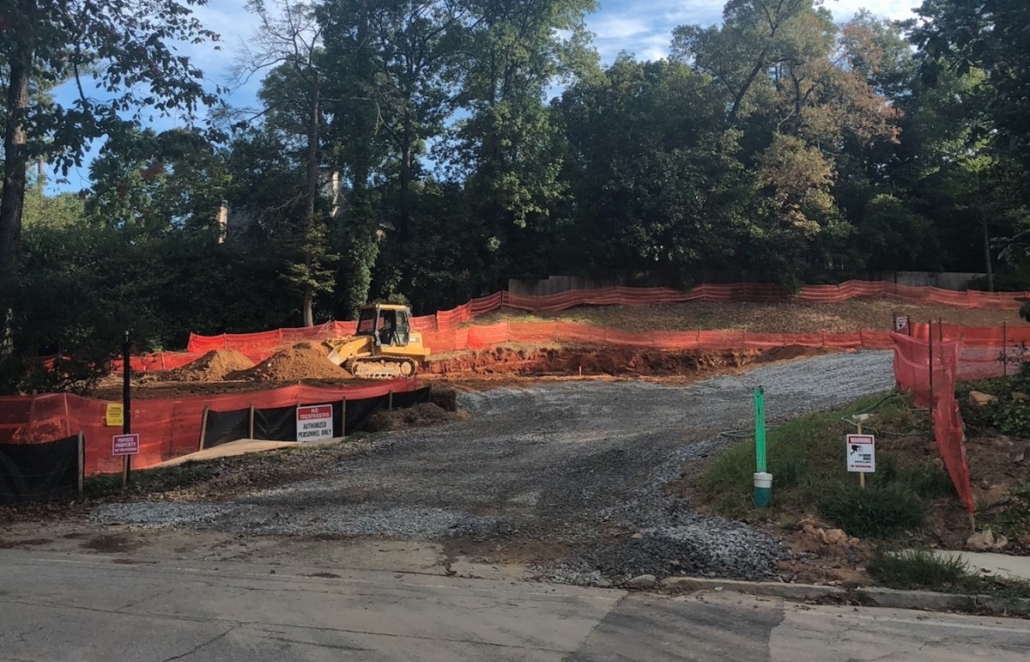 The developer posted ‘No trespassing’ signs at the site after residents questioned tree removal at the site. Credit: Nancy Jo McDaniel 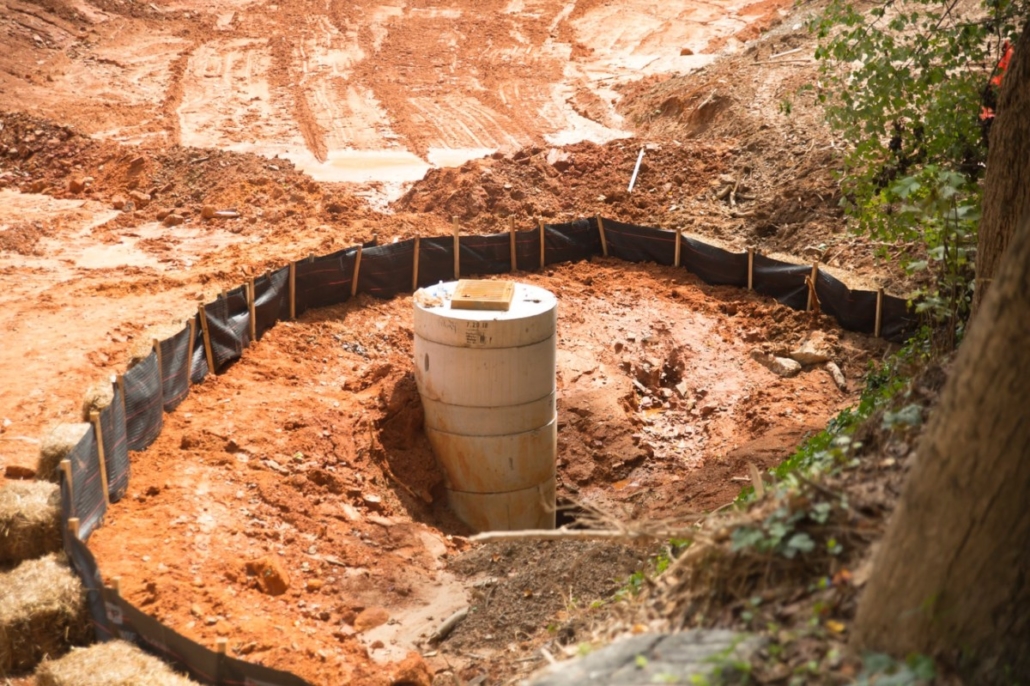 After trees were removed from the site, the developer installed an earthen berm and silt fence to control soil erosion and runoff. Credit: Nancy Jo McDaniel