At Aaron’s annual meeting Tuesday morning, one shareholder observed: “If you can’t beat them, join them.”

The newest director elected to the board was Brian Kahn, 40, investment manager of Vintage Capital Management, who tried unsuccessfully to buy the lease-to-own retailer earlier this year with an unsolicited $2.3 billion offer.

Instead of accepting Vintage’s offer, Aaron’s ended up acquiring Progressive Finance Holdings LLC, a virtual lease-to-own company, in an all-cash deal for about $700 million. That basically ended Kahn’s ability to takeover Aaron’s. 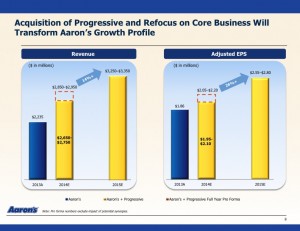 “We felt that what we were working on (the Progressive deal) was better by far than the offer we had from Vintage,” said Ray Robinson, the non-executive chairman of Aaron’s board. “But we felt that a way of resolving the issues we had with Brian was to invite him to join the board.”

After shareholders elected him to the board, Kahn seemed to want to be a team player at the company – although he did allude to the possibility of becoming a change agent on the board.

“I think the board has shown a willingness to adapt, and I think we have an opportunity to expand our profitability on our core business,” Kahn said. “We now have a new growth leg with Progressive. The Progressive business is new for me.”

Kahn said the board will be in a position to oversee the management’s plans on operating its core business as well as the virtual lease-to-own acquisition.

“So far Progressive has been out-performing their expectations,” Kahn said.

As for the way he was being received on the board, Kahn expressed his appreciation. 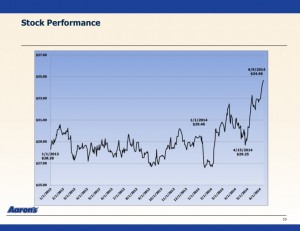 Kahn said that when Robinson invited him to join the board after he withdrew his unsolicited bid, it did bring all the parties under the same tent.

“I think it was a big relief for management,” Kahn said, adding that they may have been worried that he would have continued to be a thorn in their side. “Now everybody can get back to work.”

Kahn, however, did say that he and the board would be working with management to make sure that Aaron’s would be doing “rigorous succession planning in all areas” of the company.

Aaron’s CEO Ron Allen is 72. The company’s CFO, Gil Danielson, is 67. Danielson has been with the company since 1990, and he had served on the board until Tuesday’s annual meeting.

But the company decided to undertake several governance changes. It reduced the number of inside directors to one – Ron Allen. It separated the roles of chairman and CEO — making Ray Robinson the non-executive chairman.

And shareholders approved changing the company’s bylaws to declassify the terms of directors so that all board members would have to be re-elected every year.

During the meeting, Robinson also announced that the company would be adding another new board member within the next 30 days — Matthew Avril, the former president of hotels group of Starwood Hotels and Resorts Wordwide.

Previous Article
Why We Love Junk Food and How to Kick the Habit
Next Article
Atlanta to set Streetcar fares; city to provide public input on future fare hikes