After a tumultuous period for the Atlanta-based company, Aaron’s Inc. has named a new CEO — John W. Robinson III.

Aaron’s, a lease-to-own retailer specializing in the sales and leasing of furniture, consumer electronics, home appliances and accessories, had been searching for a CEO since the retirement of Ronald W. Allen in August after he lost confidence of major shareholders and board members because of poor financial results.

His appointment as Aaron’s new CEO is effective today, according to a company release. Robinson also will become a member of the company’s board of directors. Gil Danielson, who served as interim CEO, will remain executive vice president and chief financial officer. 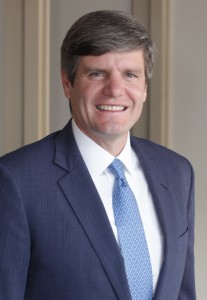 “The board and management team worked closely with John throughout the past year, before, during and after the acquisition of Progressive,” said Ray Robinson (no releation), who is chairman of Aaron’s board. “His experience in the RTO (rent-to-own) industry and his vision for positioning Aaron’s for continued success will help drive the company forward as we leverage our broad retail footprint, our leadership in virtual RTO and our strong franchisee relationships.”

“Gil’s experience as the company’s Chief Financial Officer for more than 24 years has been an asset as we focus on reaching our business objectives while smoothly transitioning John into this leadership role,” he said

John Robinson said the company is working hard to create the best rent-to-own experience possible for its customers.

“I’m energized and look forward to continuing the work that we’ve already begun to meet our customers’ changing needs through a fully-developed omni-channel platform,” John Robinson said. “We are making good progress on our goals and continue to focus on driving improved results for shareholders.”

Under John Robinson’s leadership, Progressive Leasing has experienced exceptional growth.  The company’s annual revenue has increased from approximately $228 million when he joined in 2012 to close to $700 million expected in 2014.

In searching for a new CEO, the Aaron’s board retained Spencer Stuart, a leading executive recruiting firm, to assist in the process of identifying Allen’s successor. The search process included a full review of both internal and external candidates.

John Robinson aslo is the former President and Chief Operating Officer of TMX Finance LLC (dba TitleMax), one of the largest auto title lenders in the U.S.  He joined TitleMax as chief operating officer in 2004 and was appointed president in 2008. From 2004 until his departure in December 2011, John Robinson helped grow TitleMax from approximately 100 stores to more than 750 stores.

Previous to TMX, he worked in the investment banking groups at Morgan Stanley, Lehman Brothers, and Wheat First Butcher Singer where he developed significant expertise while following the RTO industry.