Some of the hallmarks of the four-decade Guinea worm eradication campaign, led by The Carter Center, are its agility, data-driven decision making, deep-rooted partnerships, and commitment to prioritize the needs of the endemic countries. 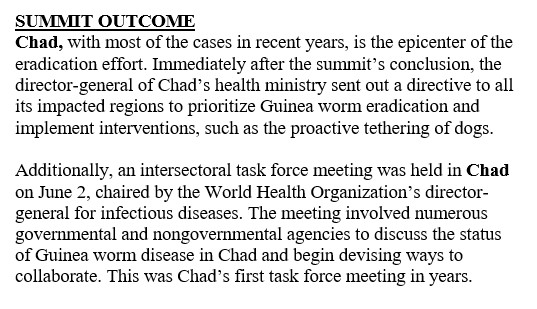 With a historic announcement of just 15 human cases coming at a time of establishing a new normal amid the COVID pandemic, we had a small window of opportunity to gather and reinvigorate the global Guinea worm team. When we put out the call, the folks that are most intimately aware of the challenges of the last mile answered.

The Carter Center and the United Arab Emirates’ Crown Prince Court used their considerable combined influence to swiftly bring impacted countries and partners together in March 2022 for the Guinea Worm Summit in Abu Dhabi. The summit resulted in important discussions, a signed declaration, renewed energy, and tangible actions to accelerate efforts to eradicate the ancient disease.

High-level representatives of Angola, Cameroon, Chad, the Democratic Republic of the Congo, Ethiopia, Mali, South Sudan, and Sudan reconfirmed their commitment to accelerate progress by signing the Abu Dhabi Declaration on the Eradication of Guinea Worm Disease. At Qasr Al Watan, the UAE’s presidential palace, the declaration was signed in solidarity by Sheikh Shakhboot bin Nahyan Al Nahyan, minister of state at the UAE Ministry of Foreign Affairs and International Cooperation; Jason Carter, chair of the Carter Center Board of Trustees; and Dr. Tedros Adhanom Ghebreyesus, director-general of the World Health Organization.

The summit celebrated the success to date  of the global campaign, highlighted by an original video that inspired even the hardest of hearts. I invite you to watch it for yourself.

Many summit attendees were meeting face to face with their counterparts for the first time since the pandemic began, renewing old alliances. It created momentum and reinspired the Guinea worm team and many of our partners, reinforced relationships, and created opportunities to build new connections to tackle neglected tropical diseases.

The UAE continues to be an unwavering partner, the program’s third-largest donor, committed to seeing eradication through to the end. Furthermore, the UAE’s central location for African travel, its proactive response to COVID combined with its openness for international business travel while hosting the World Expo, its role as an independent regional powerbroker, and its commitment to global health made the UAE an ideal convening partner for the summit.

The summit provided an important opportunity for coalition members to learn from and be inspired by one another after a long period of going it alone — which they did quite successfully, remaining at least 90% operational throughout the pandemic. But those personal interactions are vital.

That’s one of the unique characteristics The Carter Center has – bringing people together. It’s what President Carter wanted The Carter Center to do from the start 40 years ago, and that has translated into a global eradication campaign that is able to build consensus around issues that affect people in the most marginalized places. Combine that with the convening power of the UAE and the energy of partner countries and organizations, and you have a formidable force for good in the world.