According to the peafowl: Andalusia Farm and Flannery O’Connor’s birds 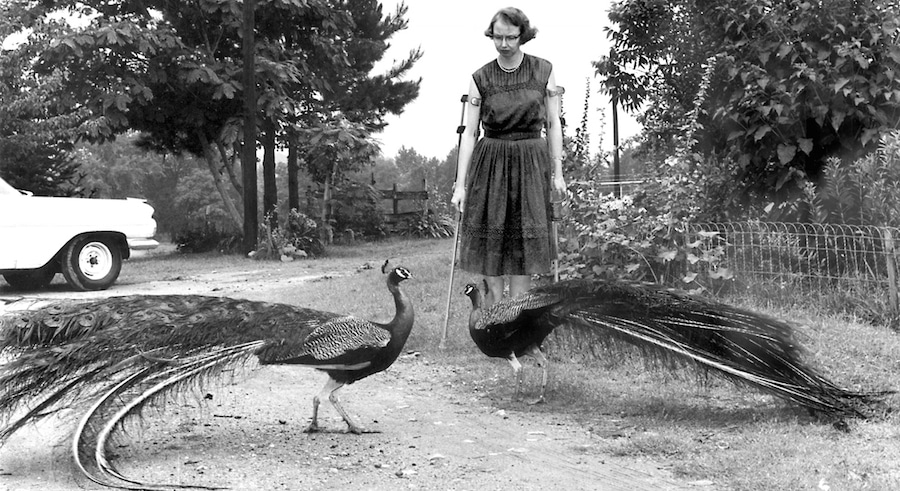 In the children’s book Click Clack Moo: Cows That Type, written by Doreen Cronin and illustrated by Betsy Lewin, Farmer Brown has a problem. His cows have found a typewriter and have taken to writing him letters about conditions in the barnyard. With the exception of the Chick-fil-A cows decorating billboards that line the interstate, there have been no reports of literate cows in Georgia (yet). Still, animals are an essential — and charming — part of the way that many Georgia museums and historic sites tell their stories.

Atlanta’s Georgia Aquarium is the number one tourist destination in the state, and Albany boasts the Flint RiverQuarium.  In addition to portraits of Georgia’s distinguished leaders, wildlife dioramas decorate the halls of the state capitol, bringing the outdoors in. Southern Forest World, in Waycross, features preserved denizens of the forest.

We cannot, of course, forget those of Georgia’s creatures who have been immortalized in literature. For 25 years, Walt Kelly’s comic strip Pogo, featuring animal residents of the Okefenokee Swamp, entertained newspaper readers. Before that, Eatonton native Joel Chandler Harris preserved African American trickster tales via the antics of the scheming Br’er Rabbit, Br’er Fox, and Br’er Bear in his Uncle Remus stories.

At the intersection of museums and literature stands one of Georgia’s greatest authors, Flannery O’Connor. Her inimitable passion for peafowl and other birds lives on at her Milledgeville home, Andalusia Farm. At Andalusia the peafowl Joy/Hulga and Manley Pointer II (both named after O’Connor characters from the story “Good Country People”) are on hand to welcome visitors and provide a sense of what Andalusia might have been like in O’Connor’s day.

Visitors’ “fascination with the peafowl on site offers us an opportunity to bring the experience back to Flannery and her writing and her time at Andalusia Farm from 1951 to 1964, when she died of lupus at age 39,” says Elizabeth Wylie, executive director of Andalusia. “As a place of preservation, we are interested in recreating the look and feel of the backyard when Flannery and her mother lived at Andalusia.” 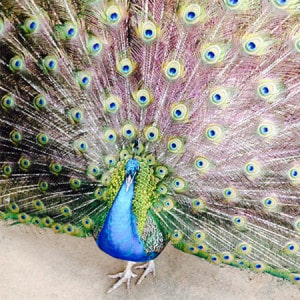 The author, it must be noted, had at least 40 peafowl. For now, two must do. According to Wylie, the expenses associated with each bird run to approximately $1,000 a year, and the birds — indeed, Andalusia Farm in its entirety — are wholly dependent on funds secured through grants and donations. Moreover, the size of the current aviary prohibits the addition of any more residents. The necessity of this protective shelter cannot be overstated, especially with the recent influx of coyotes in the area. Even with proper protection, peafowl are attractive prey. One of the aviary’s former tenants, a peahen named Mary Grace, was brutally murdered in 2015. The culprit: a weasel.

The challenges of raising safe, healthy peafowl aside, the birds are a big part of the visitor experience at Andalusia. “What’s better,” Wylie asks, “than to see the peacock’s enchanting fan and dance as he tries to attract the peahen?” While many of Andalusia’s visitors have come to pay homage, some aren’t so familiar with O’Connor’s work. The birds offer a way for Wylie and her staff to engage young visitors and those who have yet to encounter O’Connor’s corpus, as well as to encourage repeat visits to the farm.

On April 8-9 Andalusia Farm will celebrate O’Connor and her feathered friends with Birdfest!. The event, a collaboration with Georgia College and State University’s Department of Biological and Environmental Sciences, will feature Massachusetts Audubon ornithologist Wayne Petersen, who will present a lecture and lead a trail walk. A Bestiary of Birds, an exhibition of illustrated bird portraits by Ryan and Lucy Berkley, anchors the celebration. 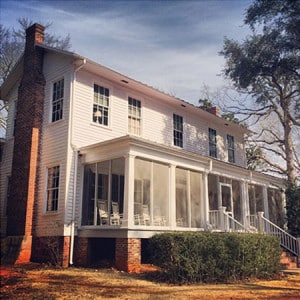 The exhibition of the Berkley portraits, which feature birds wearing clothes, is especially appropriate. Handy with a needle, a young O’Connor assumed the role of avian couturier. “She was bird crazy from an early age,” Wylie reports, “and famously made clothes for her chicken Egbert.” Fittingly, each Berkley portrait is accompanied by a short story about the sitter.

As an adult, O’Connor addressed her interest in birds through her writing. In 1961 she detailed her passion (ignited in childhood when a Pathé newsreel filmed an O’Connor chicken walking backwards) in an article for Holiday Magazine entitled “Living with a Peacock.” Peafowl also occasionally appear in O’Connor’s short stories, one of which, “The Displaced Person,” uses a peacock quite prominently as an important narrative element.

Referring to her growing flock, O’Connor concluded “Living with a Peacock” thusly: “I intend to stand firm and let the peacocks multiply, for I am sure that, in the end, the last word will be theirs.” She was right. The last word does belong to Andalusia’s peacocks, but the story that they tell is hers. It is a Georgia story — that of a talented young writer who went north to hone her craft, but returned home to Milledgeville when stricken with lupus. O’Connor’s fiction was inspired by the red clay of Georgia and those who trod it (peafowl included). She captured it on the page so that others might know it, too. 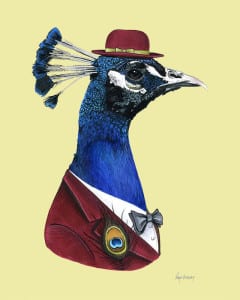