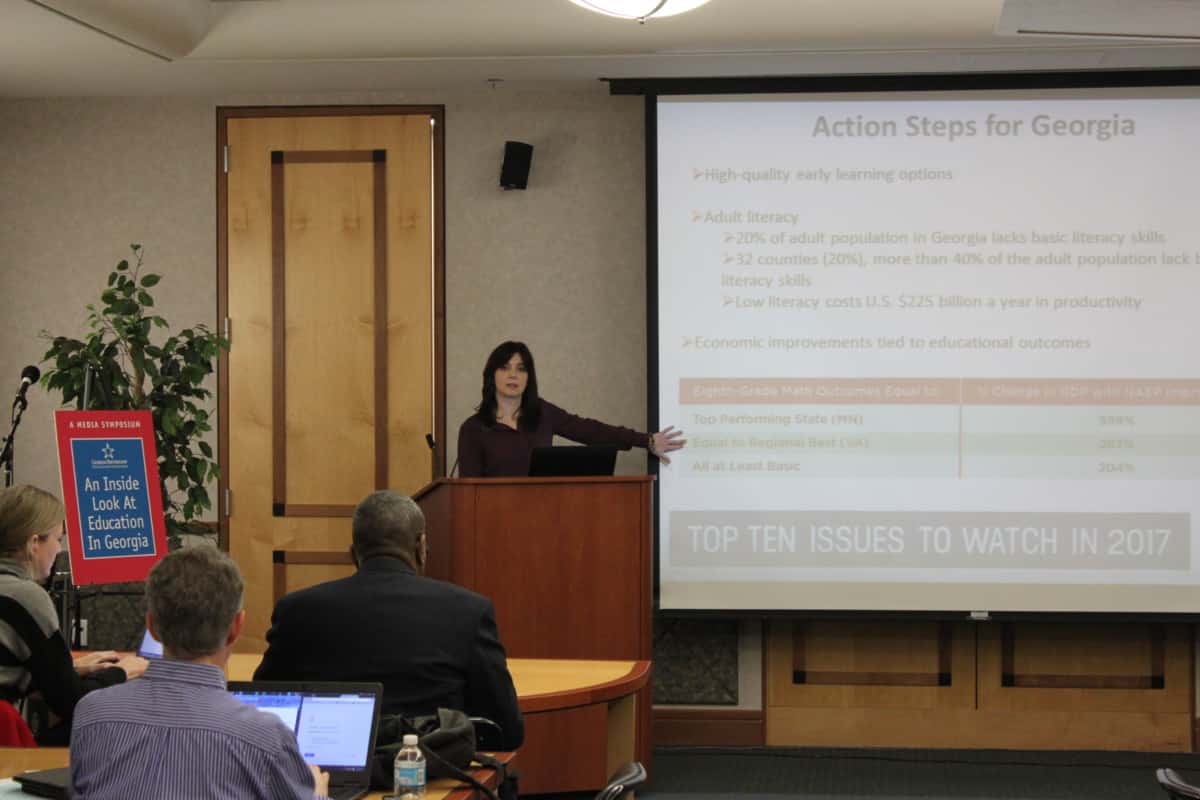 By Guest Columnist DANA RICKMAN, PhD, the director for policy and research at the Georgia Partnership for Excellence in Education

Last November, Georgia voters rejected a constitutional amendment to establish an Opportunity School District (OSD) that would have created a new state-run district with the authority to step in and manage “chronically failing” schools. At that time, 127 schools were on “the list.” These were schools that received a failing score on the state’s accountability report card three years in a row. 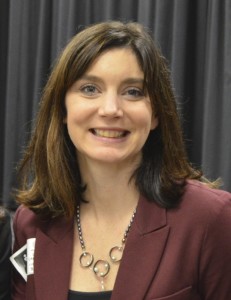 This January, the Governor’s Office of Student Achievement released the new list of schools that had been ‘failing’ for three consecutive years. That list grew to 153 schools, with 13 dropping off and 48 coming on. Now that voters have rejected the idea of an OSD the question being asked by many is: “Where do we go from here?” This issue is so important that it made the list of the Georgia Partnership’s annual Top Ten Issues to Watch report, Issue 10 – No Opportunity School District – What Now?

The first step in solving a problem is to accurately define it. Among the schools on the list, more than 90 percent of enrolled students participated in the free/reduced price lunch program, and 95 percent were either black or Hispanic. Much of the root problems around chronically low-performing schools can be found in the impacts of poverty and a history of disinvestment in local communities.

Poverty is not just the context within which underperforming schools exist. It directly impacts the students, families, schools and broader community. Children exposed to stresses and traumas associated with poverty are at an exponentially higher risk of learning and behavioral problems than children who are not – 51 percent vs. 3 percent, according to Turnaround for Children in Poverty, Stress, Schools: Implications for Research, Practice and Assessment, by E. Yu and P. Cantor.

At the same time many underperforming schools contend with the impacts of poverty and continue to struggle, Georgia has been raising the bar on standards and instruction to ensure that students are college- and career-ready when they are graduated from high school. Georgia has transitioned to the Georgia Standards of Excellence (GSE) in English/ Language Arts and Mathematics to improve critical thinking skills. Georgia has also implemented the Georgia Milestones assessment system that holds students and educators to a higher standard of learning. 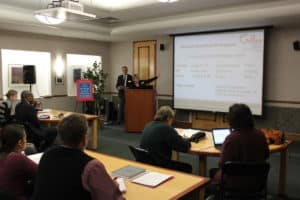 Avis King, of the Georgia Department of Education, speaks at the Georgia Partnership for Excellence in Education’s Media Symposium for education reporters and editors, about how low-performing schools are identified for support under the state’s ongoing turn around efforts. Credit: GPEE

The problem Georgia is facing is not that there are chronically failing schools. Properly identified, the problem is that many schools are being overwhelmed by issues of chronic poverty and community disinvestment at a time when expectations around student achievement are being raised exponentially. It is very difficult for a school to outperform the community where it is located.

Another issue that gets lost when the discussion is framed around “failing schools” is the positive outcomes that Georgia is seeing as a result of raising the expectations and standards for all our students, especially among students living in poverty.

Just recently, it was announced that more than 1,000 Georgia schools Beat the Odds in 2016, performing better than statistically expected on the College and Career Ready Performance Index, Georgia’s accountability system. The Beating the Odds analysis predicts a range within which a school’s CCRPI score is expected to fall – given the school’s size, grade cluster, student mobility, and student demographics (including race/ethnicity, disability, English learners, and poverty). If a school’s actual CCRPI is above the predicted range, then that school beat the odds. 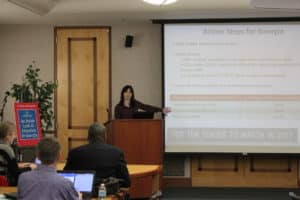 Dana Rickman, policy and research director for the Georgia Partnership for Excellence in Education, provides details on the Top Ten Issues to Watch in 2017 report for reporters at the organization’s January Media Symposium. Issue 10 addresses the Opportunity School District topic. Credit: GPEE

Georgia also exceeds the national average on the number of students taking Advanced Placement (AP) exams and scoring a 3 or higher, which qualifies students for an average of 3 college credits. Ten Georgia school districts were named members of the Annual AP District Honor Roll, a list of districts honored for increasing access to AP coursework while simultaneously maintaining or increasing the percentage of students earning a 3 or higher. Finally, Gwinnet County Schools was named a College Board Advanced Placement District of the Year among the nation’s largest school districts.

The challenge before Georgia is how to ensure all students achieve to this same level of excellence and meet the rigorous demands being placed on them. Now that the constitutional amendment has been defeated, an important next step for Georgia is to explore ways to collectively solve the problem.

One solution has been brought forth by state Rep. Kevin Tanner (R-Dawsonville), along with other fellow Republicans. They have introduced a bill intended to help answer that question, House Bill 338. Click here for a detailed summary provided by the Georgia School Boards Association.

While the debate over the OSD was contentious, nobody was arguing in support of the status quo. Or, that it was OK for some students to thrive while others were left behind. Everybody agreed that too many students did not have access to the quality resources they needed to succeed. The combative debate was over the correct approach to solve the problem.

In crafting HB 338, Tanner met with a variety of stakeholder groups, from state leaders to teachers, superintendents, and education advocates. The attempt was to bring together the opposing voices around the OSD debate and create a meaningful plan that would generate needed resources and capacity to tackle this complicated issue. 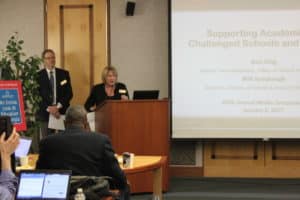 Avis King and Will Rumbaugh, of Georgia Department of Education, brief reporters at the January Georgia Partnership for Excellence in Education’s Media Symposium about the efforts underway in Georgia to turn around failing schools. Credit: GPEE

Does this legislation provide a solution to the complicated issues and challenges facing schools of concentrated poverty? It is too early to answer that. Currently the bill has passed out of the House Education Committee and is awaiting a vote by the House before it goes to the Senate. However, having the discussion around HB 338 is an important step in keeping the spotlight where it belongs – on the needs of Georgia’s students.

Another important vehicle to tackle the issue of struggling schools is the new state education plan, with development led by the Georgia Department of Education. The passage of the Every Student Succeeds Act (ESSA) frees individual states from many of the previous federal regulations and are responsible for building their own state plans. Georgia is now developing new rules over how to measure success, how to define ‘failing’ schools, and how to support and intervene in struggling schools.

Through this process, the state DOE has already solicited public feedback around plans to increase capacity of struggling schools through the expansion of government, non-government, non-profit, and business partnerships with local education system and communities. The formulation of the state plan is also incorporating emotional and intellectual support for students to build social skills along with their academic skills. The public will have the opportunity to provide feedback on the proposed state plan this summer.

ESSA offers all of us a prime opportunity to build on the progress we’ve seen in our state to close achievement gaps and help our highest-need students succeed. Whether through legislation or state planning efforts, the discussion needs to move away from talk focused exclusively on “failing schools” and into an area of how do we, as a state, support the complex and growing needs of all students. There are examples of excellence in Georgia and there are gaps where student needs are not being met.

All stakeholders need to be involved in this discussion. For Georgia to be successful, it will take a comprehensive and coordinated assessment of current policies and practices at the state and local level as well as visionary plans to address the need. It will also require commitment from all Georgians to ensure the will to do something is sustained and the state, districts, and individual schools have the capacity to see their ambitious plans through.