The American Friends and Service Committee (AFSC) launched its training series titled “How to Defend Your Home” on Thursday, Oct. 27.

The series is intended to help renters learn the best practices, techniques and the rights tenants have when facing eviction.

The free training workshop comes with a newly released manual from the AFSC and the Housing Justice League that details steps and provides all kinds of information about the subject.

A similar manual was put together for the first iteration for this program in 2011, when the housing crisis hit many low-income homeowners around the city. Tim Franzen, program director for the economic justice program at American Friends and Service Committee says the original manual took off in Georgia and spread to other parts of the country like Minnesota and Florida.

Altogether, the manual was able to aid in saving hundreds of homes — no small feat — but during a housing crisis that saw millions lose their homes, Franzen noted.

However Franzen, sees this new 2022 manual as a first-edition in its own right. He feels the manual and the home-defense program come at a crucial time for the current housing crisis, this one centered around renters.

“Things changed, and the crisis changed. Anybody could use this for a housing fight, to stop a foreclosure. But we really catered to renters and people living in apartment complex communities this time around,” Franzen said.

The manual was written with Georgia in mind, but many of the concepts and techniques can be applied anywhere. 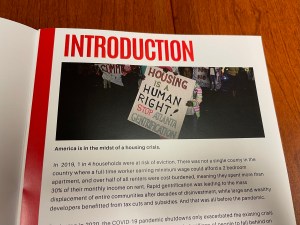 One of the focuses of the training and manual is to teach autonomous home-defense and help people gain valuable skills for self-advocacy.

“If there’s a housing struggle and we go and pay everybody’s rent for a couple of months, I think that is a good thing… But our approach to dealing with a housing crisis is using community organizing, to actually change the relationship between those who are being oppressed and those that are in power,” Frazen said.

Renters, he argued, should realize how ironic it is that the ones paying for a complex are the ones with the least power in relation to the complex owner.

“They’re basically wealth generators for whoever owns it. And we’ve got it so flipped around that we think that they’re doing us a favor,” Franzen said. “The people that are in charge should be the ones that are paying for it.”

He continued saying that he sees positive differences when there are functioning tenant associations that give power back to renters.

When the idea of rent control was brought up, Franzen argued it’s now a possibility compared to just five years ago — and the campaigns that launch from these home defense trainings can be a part of that effort..

“Our intention is to have campaigns launched from these trainings. And the idea is that somebody could launch their own campaign without us — and win,” Franzen said. “We already have about 10 petitions up, 7 or 8000 emails collected so far, but our goal is really to quadruple that,” Franzen said.

With the petitions and data comes the push for rent control.

“Our big policy push, every piece of data we collect, every campaign — it all goes back to repealing the ban on rent control,” Franzen said. “And we think we have a shot at it”.

Franzen emphasized that this shot is possible regardless of Stacey Abrahms or Brian Kemp in office, while acknowledging that the former gives a better chance. He argued this because rent control isn’t only needed for Atlanta, a typically Democratic stronghold, but all over the state of Georgia.

Frazen went on to acknowledge rent control isn’t a “silver bullet”, and that much of its effectiveness depends on what kind of rent control would be formed.

Nonetheless, he remains optimistic that through the home-defense trainings and manual, more campaigns and housing fights can be won. And he emphasized that even one residence saved will make all of these worthwhile.

“We are willing to come and do this training for two people, for 100 people, for 1000 people — and we’ll do it for free. And we’re willing to staff housing campaigns,” Franzen said. “We’ll work with people for however long it takes for them to have resolution in their fight.

The next scheduled training is set for November.