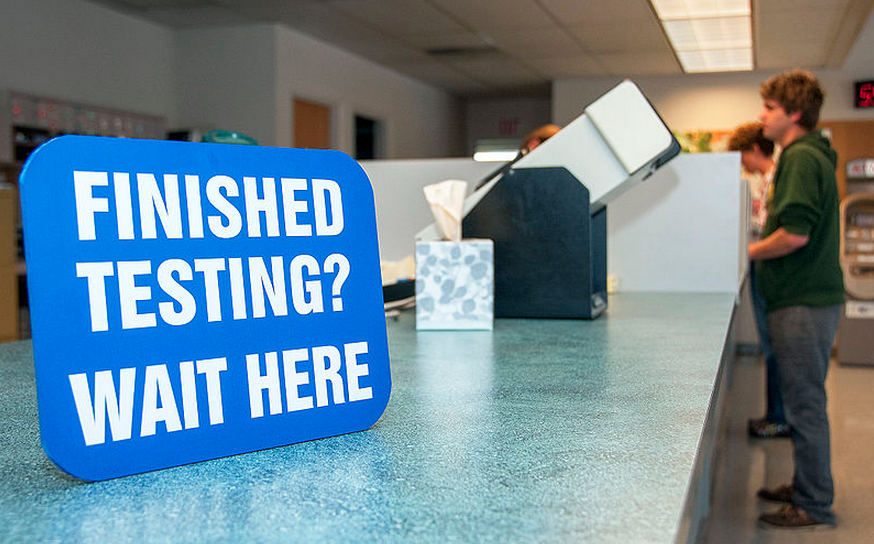 Last week the state of Alabama began implementing a new budget which includes, among many cuts, the closing of 31 drivers license offices, leaving 28 of the state’s 67 counties without a place where you can get a license.

If the U.S. Supreme Court had not stricken the pre-clearance section of the Voting Rights Act in 2013, this action would probably be in federal court already. Even though these satellite offices were only open part-time anyway, their closure disproportionately affects majority black, Democratic voting counties, four years after the legislature passed a photo voter ID law.

There may still be a legal challenge to the closures, and there will surely be a lot of Democratic fundraising around the issue. Hillary Clinton was quick to weigh in.

“This is only going to make it harder for people to vote. It’s a blast from the Jim Crow past,” the Democratic presidential candidate said in a statement.

State officials defended the action, pointing to the low numbers of licenses issued at the affected offices and arguing that efforts have been made to make photo IDs available to qualified voters.

“The criticism is strictly a liberal attempt from people who are not from here, and don’t understand what’s going on with our people or our budget situation, they’re trying to use that to bring attention to our state in a negative light,” Secretary of State John Merrill said.

This sounds a lot like the kind of comments Alabama state officials made when the Voting Rights Act was enacted back in the Sixties. But Merrill has a point in implying that something bigger is going here than the way the story is being cast nationally. The closing of these offices is not only a major voting rights story. In kind with Georgia’s rural hospital crisis and the county school consolidations which have been the bane of so many small towns across the region, it’s another step in the third-worlding of the rural South.

The closing of the 31 offices is a byproduct of a long wrangle over the state budget, which took two special sessions to pass, only weeks before the Oct. 1 beginning of the state’s new fiscal year. As severe as the cut was, it could have been worse. At one point in late summer it was thought all but four license offices might be closed, before the legislature agreed to the standard cocktail of a cigarette tax increase, a nursing home bed tax increase and a few other bridge-gapping measures.

To achieve an $88 million reduction in spending, the state is also closing five state parks and six National Guard armories, several of which are located in the same counties which are losing their driver’s license offices.

Other parts of the state are affected as well. But in poor rural areas, the loss of four or five mid-level state jobs can blow a hole in the entire local economy.

For the better part of the last century, rural areas “probably got more than their share” of tax dollars, noted Al Cross, director of the Institute for Rural Journalism and Community Issues at the University of Kentucky. That began to change, he said, with the 1962 case, Baker v. Carr, which led to the “one man, one vote” principle. It has accelerated as rural areas have lost power over succeeding redistricting cycles.

This collapse in budget power means that as states like Alabama sharpen the knife on state spending, the blade falls hardest on those rural areas which once were the beneficiaries of the state’s largesse.

States have to allocate their resources in a proportional way, Cross said, but services shouldn’t be withdrawn in a way that unfairly burdens one race or political party.

Officials in Alabama have argued that much of the business of the offices can be handled over the internet, but that only underscores the speed with which the gap between rural and urban areas is in many cases widening across the South. You aren’t likely to get a very fast internet connection in most Black Belt counties.

The closing of the drivers license offices may not have been a nefarious plot to deny political power to African-American voters, as it will surely be portrayed. But it had the same effect, and is part of an even more troubling downward spiral.