On a warm, sunny day on Sept. 10, 2004, Alex Garvin looked out of the helicopter at a massive granite quarry with the skyline of Midtown Atlanta only a few miles away in the background. Without hesitation, he emphatically explained, “THAT needs to be a park!” After shooting a flurry of photographs with his early-model digital SLR camera, Garvin declared he was going to make it happen. 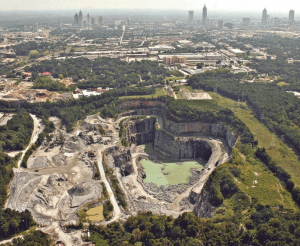 Vulcan Quarry, as seen in a 2004 photograph by Alex Garvin, is now the site of the Westside Park.

That helicopter ride to tour the Beltline corridor from the air, courtesy of APD, was part of Garvin’s work on his 2004 report, The Beltline Emerald Necklace: Atlanta’s New Public Realm, which was a precursor and foundational work for the Beltline TAD and the project’s future success. I was sitting next to Alex on that helicopter and worked with him as a project manager on the report.

With Alex’s passing last December, the planning world lost a world-renowned planner, parks advocate and urbanist. Fortunately for Atlanta and its residents, Alex leaves a lasting legacy on the city’s public realm for generations to come. Between his work on the Beltline and what would become the Westside Park, Alex played a pivotal role in both projects.

Following the helicopter ride, Alex included his photograph of the quarry on the back cover of the Beltline Emerald Necklace report. The Trust for Public Land, with funding from the Blank Foundation, was the direct client, but the work was a cross-sector collaboration with close coordination from the City of Atlanta, the Atlanta Development Authority (the precursor to Invest Atlanta) and Mayor Shirley Franklin’s administration. Although several City officials recommended removing the photo and quarry park recommendation from the report due to Vulcan’s 25-year lease on the property at the time, Alex ignored the advice. He found the idea too compelling and whether it took ten years or 25 years, he strongly felt the property needed to be a park, even if no one else believed it would happen.

In a combination of fortunate timing, a federal consent decree on stormwater overflow, which provided funding from the City’s watershed department and Vulcan’s business operations, the timing lined up to make the park happen. Not long after the report was published, leaders at Vulcan received a copy of the report, saw the photo on the back cover, and reached out to the City and County to ask if they wanted to buy out the lease. The project still took another 17 years for design and construction (including the “Driller Mike” boring machine to divert water from the Chattahoochee River to fill the quarry), but Atlanta’s newest and largest park finally opened last year.

Garvin never saw the completed park, but he toured it while it was under construction three years ago with Barbara Faga, a close friend of his from EDAW, and me. He was energized and proud of his role, but even more proud of the City of Atlanta for embodying his famous definition of successful planning: “A public action that has a sustained and widespread private market reaction.” The new Westside Park and Atlanta Beltline are the embodiment of that ethos. 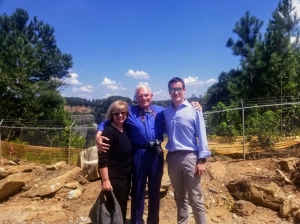 Barbara Faga, Alex Garvin and Jim Schroder in Aug 2019 during the construction of Atlanta’s Westside Park.

Back in early 2004, Garvin was tapped as an international planner, urbanist and parks advocate to help expand Ryan Gravel’s Beltline’s master’s thesis, largely focused on transit, to include parks, open space and economic development. Garvin was immediately drawn to the simplicity and genius of Gravel’s thesis and hired Gravel to join the project team. Combining Gravel’s local knowledge and expertise with Garvin’s strategy for building a coalition, the team’s collective work under Garvin’s leadership in the Emerald Necklace report was instrumental in moving the project forward: it expanded a transit idea to one that included parks advocates, property owners and economic development focused on the growth of the city. Garvin’s thesis was simple: Atlanta needed a new public realm around which to re-urbanize and re-densify the city. The Beltline corridor served as the perfect public realm framework.

At the time in 2004, the region’s outward sprawl hadn’t peaked. But Garvin saw future trends in cities and knew the City of Atlanta’s population would rise again. With such a large proliferation of single-family housing and privately-owned green space (i.e back yards), the City would need to add density and park space to attract and retain the residents for that future growth—without displacing existing residents. The Beltline was the perfect public realm to frame that new development along a largely abandoned industrial and commercial corridor around the heart of the city. And sure enough, the project — which many would call the largest urban redevelopment project in the nation — has succeeded beyond anyone’s wildest dreams. 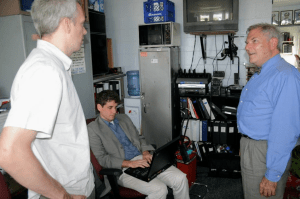 Garvin continued to visit Atlanta every year or two to track the success of the project, especially since 2012 when the first section of the Eastside Trail was completed. He included the Beltline in each of his two most recent books, “The Heart of the City” and “What Makes a Great City.” Despite the massive success of the Beltline, the one area Garvin was always disappointed in was the slow progress on affordable housing. In the 2004 report, he pushed for early property acquisition along the Beltline corridor for trail construction and housing before market values escalated. He felt that delay was the one area of the project that could have made more progress early on. Even so, he was encouraged by the progress officials are making in recent years to both preserve existing and create new affordable housing. 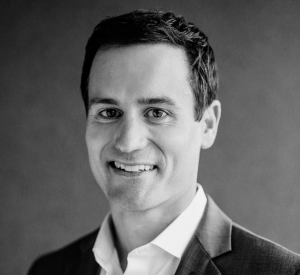 Jim Schroder is an expert in real estate investment, planning and development who served as the project manager for Alex Garvin on The Beltline Emerald Necklace report in 2004. Originally from Cincinnati, he moved to Atlanta along the Beltline in 2012 and is currently Head of Real Estate for Juno Residential.

Throughout his career, Garvin always had a passion for cities and the vibrancy of life they embodied. His true hero in life was Frederick Law Olmsted, the landscape architect and designer most famous for Central Park, but also the master planner behind Druid Hills and whose firm also designed Piedmont Park and Grant Park. It was no coincidence that Garvin referenced Olmstead’s Emerald Necklace Park system in Boston for the Beltline report. Garvin had a vision for the future of Atlanta, and it was grounded in a new and expanded park system. One that created parks for all people. Parks of every size, and a trail system to connect them all together. To neighborhoods, to schools, and to each other.

Garvin shared his vision with a twinkle in his eyes and to all those around him, whether they were city officials, community leaders, or residents at a public meeting. His energy and vision were infectious, and we are beneficiaries of Garvin’s vision and planning for the future of Atlanta.