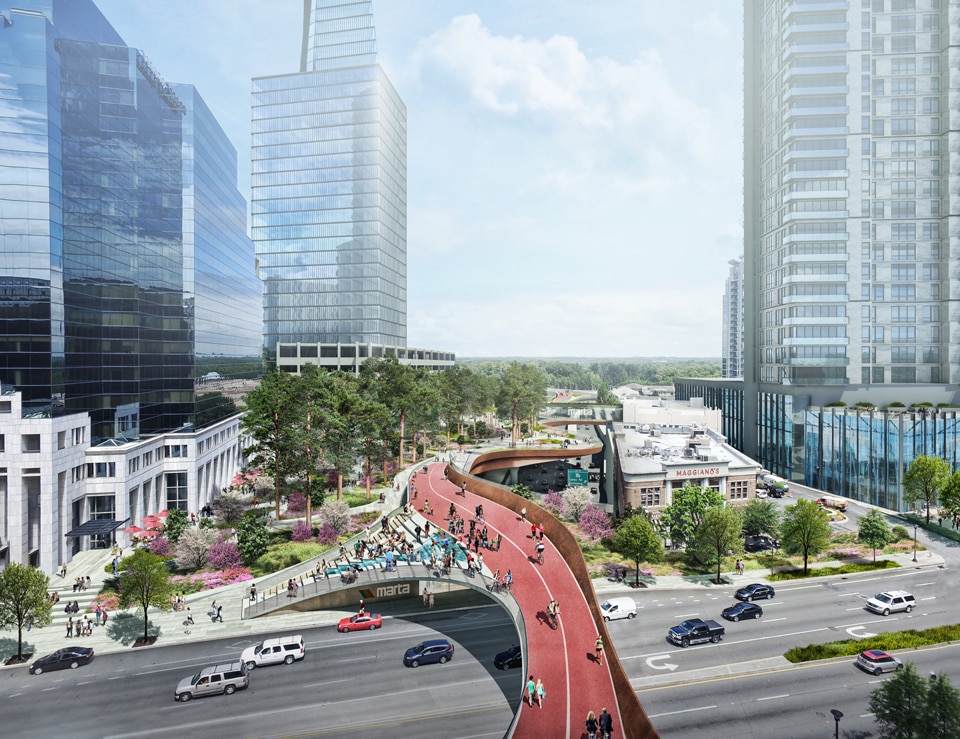 By Maria Saporta and Doug Sams
As published in the Atlanta Business Chronicle on Sept. 9, 2016

On Sept. 7, Buckhead business leaders got their first look at new designs for a proposed half-mile long park over Georgia 400 that would give a district known for glass high-rises and sprawling luxury malls much-needed open spaces. 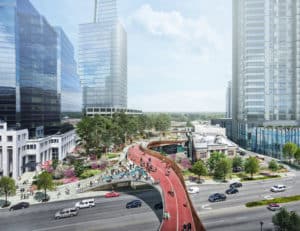 In August, Central Atlanta Progress said it is studying how to cap the Downtown Connector. The idea, called “The Stitch,” would build a three-fourth-mile platform over Interstates 75 and 85 from the Civic Center MARTA station to Piedmont Avenue.

Both proposals could cost hundreds of millions of dollars and remain unfunded. Each would be costly and likely require public and private dollars for funding. “The Stitch” puts its price tag at $300 million. The park over Georgia 400 would cost at least $190 million.

But they reflect how urban land has become extremely valuable in this economic cycle to real estate companies and institutional capital — part of a wave of urbanization sweeping across the country’s largest cities.

Now, Atlanta and other cities are now looking for ways to fill in the missing pieces of their urban fabric — land neglected for decades when most people relied only on a car to get where they wanted to go.

“We have given away so much of our urban land to the car,” said Dick Fleming, an urban expert who once worked at Central Atlanta Progress before becoming the head of the chambers of commerce in Denver and St. Louis. “It’s nice to see cities reclaiming that space and making cities more walkable. It’s clear that while the Interstate system helped move people around, it left a lot of scar tissue in cities.” 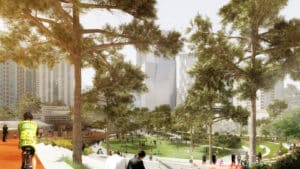 A view of one of the parks over Georgia 400 (Special: Buckhead CID)

Jim Durrett, executive director of the Buckhead Community Improvement District – which on Sept. 7 presented the idea for the park over Georgia 400, said it would help create a “complete” Buckhead.

“As people are moving to live in places like this, you have to have a place for the community to gather,” Durrett said. “The people who work here, the people who live here, and the visitors who come here would be able to gather in a beautiful, peaceful setting in one of the most successful business and shopping districts in the Southeast United States.”

The “Stitch” – a concept proposed by Central Atlanta Progress – would play a similar role – connecting the northern end of downtown with the southern end of Midtown.

“Downtown has a real opportunity to put back a street grid,” said Lee Pollock, a principle in the advance planning group of engineering and architecture firm Jacobs, which developed the “Stitch” concept and was involved with the Buckhead Park. “The Stitch makes that critical north-south connection that was removed by the highways. We can heal the wound by capping off the highway.” 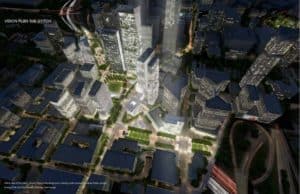 Larry Gellerstedt III, CEO of Atlanta-based Cousins Properties Inc., said he has seen how such projects can transform communities.

“It has had a powerful impact in other cities,” Gellerstedt said. “I’ve seen it first-hand because we have owned land and buildings in Dallas around Klyde Warren Park. The 5-acre park connected the Arts District with Uptown, and the development of residential, office and retail has been extraordinary.”

Gellerstedt described both the Stitch and Buckhead Park as “aspirational” concepts that are worthy of consideration.

“I certainly encouraged both of them to look at it,” he said. “I applaud them for doing so. A park would augment Buckhead. The Stitch would transform south Midtown and north downtown.”

The idea of bridging over the interstate dates back several decades. The late Mayor Maynard Jackson in the early 1980s had even had building the Carter Library over the Downtown Connector.

The first developer to actualize the idea was the late Kim King, who was able to build a one-acre park at Fifth Street over the highway – connecting the original Georgia Tech campus with the new Tech Square development in Midtown. 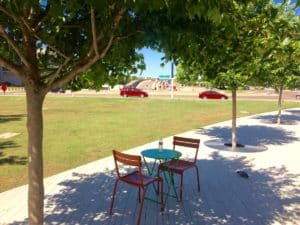 “My father learned about it on a LINK trip to Seattle,” said Beau King, president and CEO of Kim King & Associates, speaking of Freeway Park. “It was a phenomenal success at Fifth Street. Georgia Tech never had a true entrance to their property.”

Kim King, who passed away in 2004, originally had wanted to cap the Downtown Connector from North Avenue to 10th Street. But he was only able to garner the support to transform the Fifth Street bridge before he passed away.

Who knows – King’s expanded vision could still happen. Gellerstedt said Georgia Tech President G.P. “Bud” Peterson keeps asking him how they can bridge over the Connector.

On the most recent LINK trip to Dallas in May, leaders of the Buckhead CID took a special interest in Klyde Warren Park, which opened in 2012.

Tara Green, president of Klyde Warren Park, told the Atlanta group that the park has drawn a million people a year – twice as many as had been projected.

“We are loved to death,” Green said. “The lawn gets replaced every year. We have 1,300 programs and events in the park. If you are going to do a park, you can’t have enough bathrooms.” 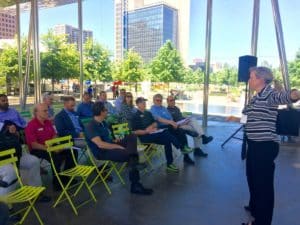 Klyde Warren Park was a public-private venture that cost $97 million with private donations and federal stimulus funding for “shovel ready” projects totaling $112 million. It costs about $3.7 million to operate the park annually, and Green said they expect to break even this year.

“All of downtown now is embracing green space,” she said. “We are looking at a possible expansion.”

A.J. Robinson, president of Central Atlanta Progress, said the idea for these projects is that “people want to reconnect our communities and create better places to live.” And because urban real estate has become more valuable, Robinson said he believes the “development opportunities will more than pay for whatever the green space will cost.”

It is still an unknown of how these projects will be realized, but it is expected they would be a public-private partnership.

“They’re expensive, but these are under-utilized assets,” Pollock said. “The value of land is so expensive.”

Gellerstedt agreed, adding that Atlanta has pulled off other aspirational projects, and he would be surprised if the Buckhead Park and the downtown “Stitch” didn’t happen in the next 10 to 15 years.

“I’ve seen what this has done in other cities,” Gellerstedt said. “Every time you create one of these parks, you create new beach-front property in your community.”