An awakening in Tifton: An old photograph of child mill workers inspired one man to search for clues about a forgotten past 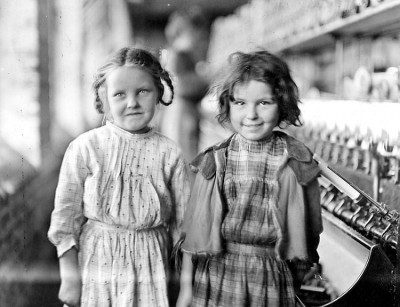 Child workers in the Tifton mill, 1909. Eddie Lou Young, one of Catherine Young's daughters, is on the right. Credit: Photo by Lewis Hine, Library of Congress 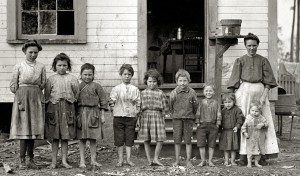 Nine of eleven children of Catherine Young (right). She, along with the six oldest children in this picture, worked in the Tifton Cotton Mill (1909). Credit: Photo by Lewis Hine, Library of Congress

In March of this year, about 100 people came together in Tifton, Georgia, from all parts of the state and the country to commemorate the memory of a lost, invisible past that was now found. Not long before, most had no idea of their connection to it.

The occasion was a special event convened by the Georgia Museum of Agriculture. The centerpiece was an exhibition on child labor in Georgia in the early 20th century, the mills who employed children, and the story of a single family: that of Catherine Young. To understand why this story is so remarkable to all who attended the event, we need go a back a century in time.

Lewis Hine was a sociologist and investigative photographer who used his craft as a tool to expose child labor conditions in the United States. In 1908 he traveled through the “Piedmont belt” that extended from the Carolinas through Georgia and Alabama.

Child workers in the Tifton mill, 1909. Eddie Lou Young, one of Catherine Young’s daughters, is on the right. Credit: Photo by Lewis Hine, Library of Congress

Often, the subjects of his photos are child workers in mills. What makes his photography so important is the detail he ascribed in notes: date, name and age of the child, the kind of work the child did, and any other information he could glean (schooling, parents, etc.). What jumps out at the first glimpse of his work is the enormous respect and empathy for his subjects that shone through every artfully constructed image. Hine’s photography, in the hands of the National Child Labor Committee for whom he worked, helped to transform public opinion and led to the enactment of reform legislation.

On Friday, January 22, 1909, Lewis Hine paid a visit to Henry Tift‘s new textile mill in Tifton, Georgia. Almost 200 miles south of Atlanta, near the Georgia-Florida border, Tifton in many respects still had a frontier quality about it. The new brick mill was one of the most important things to happen in the fledgling community. Southwest Georgia was poor then, not unlike other rural regions of the state where sharecropping was common. The mill meant jobs.

Catherine Young and her husband, Jesse, worked “shares” of cotton land in an outlying county. They had 11 children. When Jesse died of tuberculosis, Catherine had little option other than to pick up with nine of her children (the two oldest had already “married off”) and seek a life elsewhere.

She was fortunate to find a job at the recently opened Tifton mill that promised a weekly wage, supplemented by the meager earnings of six of her nine children (ages 6 to 14) who also worked at the mill. (The legal age to work in Georgia was 12, but the law was unenforced.) 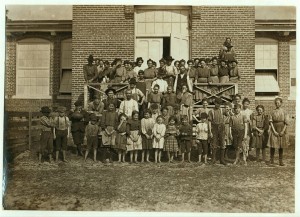 Employees at the Tifton mill. The front row comprises children (including several of the Young family), many of whom were illegally employed. Catherine Young is on the back row. Credit: photo by Lewis Hine, Library of Congress

An out-of-towner with a 5×7 camera and equipment in tow, Hine had to be careful. Mill owners and guards did not welcome nosy visitors. He risked a savage beating if his true intentions or identity became known. Somehow that day, Hine talked his way through the Tifton mill’s front door. (He was known to assume different disguises, sometimes as a traveling Bible salesman.)

Roaming the floors of the mill, his glass plates caught in black-and-white the haunting images of children at work. He also took a group photo with all the employees posed in graduated rows, children in front (one wonders how he pulled that off).

Seeking out Catherine Young, probably because many of the children in the front row were hers (she was in the backmost row), he asked to photograph her children at their mill house. Today these images are part of a Library of Congress collection. 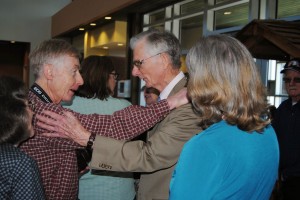 Joe Manning (left) speaks with Earl Parker, the son of Eddie Lou Young Parker, one of the girls in Lewis Hine’s photos of the Young family. Parker holds a PhD. in botany, and he taught for 20 years at Abraham Baldwin Agricultural College. The reunion and the exhibition took place at the agriculture museum located on the very same campus. Credit: photo by Brenda Sutton Rose

Nearly a century later, enter Joe Manning, a retired social worker and writer living in Northampton, Massachusetts. Already involved in community service and volunteerism, and much captivated by Hine’s indelible images, Manning was asked in 2005 by a fellow writer to track down the fate of a child photographed by Lewis Hine in 1910 in a Vermont cotton mill. Manning did so with stunning results, and found himself drawn more deeply into the photographer’s work. Who were these other Hine subjects? Whatever became of them? And so was born the “Lewis Hine Project.” Since that time, by navigating and manipulating a myriad of open record sources and networking, he has tracked down the stories of more than 300 children captured in Hine’s images.

One such subject was Catherine Young and her children, whom Hine photographed during his Tifton visit. Tracking them down was a task made seemingly impossible by the fact that seven of the nine children in the photo were placed for adoption just three months later, and Young’s two older married children were not present at the time of the photograph.

Like a shepherd, Manning found his lost sheep, one by one. Their full stories appear on his website: http://morningsonmaplestreet.com/2014/12/29/catherine-young-family/ 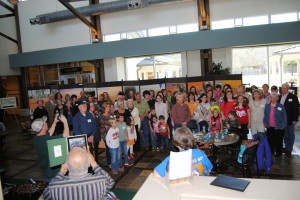 One hundred descendants of the Catherine Young family gathered in Tifton, along with Joe Manning, who researched the family’s history. Credit: photo by Brenda Sutton Rose

Why take this on? I asked him in a phone interview. “I ask myself that, too,” he replied. “I think after all these years it is a way to recover the lives of these children so they will be remembered.” With a pause, he continues: “They weren’t remembered.”

In 2013 the curator of the Georgia Museum of Agriculture in Tifton contacted Manning to invite him to come to Georgia and tell the story of Catherine Young, her children, and the Tifton mill. It was to be part of a child-labor exhibition that would travel to local schools, ending at the museum, where the living descendants of the children in the photo, none of whom knew each other (or even of each other), would be reunited. The public was also invited.

It was, indeed, a celebratory commemoration for many that evening, a discovery of things lost – indeed, of things heretofore unknown. Contacted by the museum, some from as far away as California, the children and grandchildren of all 11 of Jesse’s and Catherine’s children descended on Tifton for a “reunion.”

Why do stories like this matter? Why do they bear retelling? It seems that our hearts respond to and are nurtured by the power of such stories. Mark Nepo, the author of The Book of Awakening, summarizes an ancient wisdom thus: “As spirits in bodies we live like whales or dolphins, always swimming near the surface, forever compelled by a light from above that we can’t really make out.”

Our seeking of that “light from above” takes many forms. The intrinsic drive of Joe Manning to restore, to fill in the blank spaces of forgotten memory is one; his seeking did not allow him to adjust to or ignore society’s flaws, such as the economic expediency that leads to the tragic neglect of our fellow human beings. With almost ceremonial overtones, it is through acts of remembrance like Manning’s that we can finally confer a long-denied dignity upon “the least of these.”

Thank you, Joe Manning, for a priceless gift – three gifts really: to the children long gone, their living descendants, and we who are witnesses. There is wholeness here.

And thank you to Tifton’s Georgia Museum of Agriculture, its curator and project director, Polly Huff, and her predecessor, Lisa Lishman. To the community of Tifton that embraced 100 out-of-town guests as their own goes a special appreciation.

Previous Article
A final frontier in Atlanta: Northside Drive plans complete – Buckhead to Falcons stadium area, to West End
Next Article
Of fraud, and where the votes are