Atlanta Mayor Andre Dickens bubbled over with energy Monday morning as he repeatedly chanted messages of unity and a city moving forward to tackle the big issues of safety, early childhood education, affordable housing, investment in infrastructure as well as parks, greenspace and sidewalks. 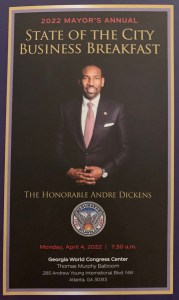 Program for the State of the City breakfast.

“I’m ready to serve my hometown with boundless energy,” Dickens told the crowd of more than 1,000 local leaders. “Atlanta has always been and remains resilient. The state of our city is strong. We are and will continue to be one city with one bright future.”

The breakfast had a spirit of victory over the failed attempts by some in Buckhead to split off from the City of Atlanta and create their own City of Buckhead.

“Together we are going to move Atlanta forward,” Dickens said. “A few months ago, that unity was threatened by a movement to de-annex a part of our city. I’m grateful to my friends at the Gold Dome that we will be one city with one bright future. So, Buckhead residents, keep Atlanta together. One Atlanta.”

James Quincey, the CEO of the Coca-Cola Co. which continued a long-standing tradition of sponsoring the State of the City breakfast, announced a new $1 million grant to create a fourth At-Promise Center in Southeast Atlanta to help support Atlanta’s youth.

Quincey said the At-Promise Centers, launched five years ago, is a collaboration among 30 youth-serving organizations providing services at each of the centers. 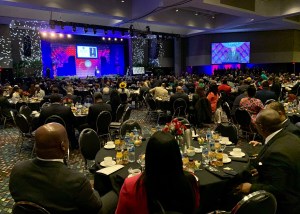 About 1,000 leaders attended the 2022 State of the City breakfast. (Photo by Kelly Jordan.)

“Since the start of the centers, more than 350 at-risk youth have been served,” said Quincey, adding that 100 percent of the students involved in the program have graduated from high school. “The At-Promise centers are making a tremendous impact, and the Coca-Cola Co. is proud to support them.”

The second major announcement came from Mayor Dickens, who announced a $20 million initiative to invest in early childhood education in the City of Atlanta, to help overcome the equity gap in the city.

“I’m investing $5 million for our children’s future in early education,” Dickens said. “We are asking APS [Atlanta Public Schools] and the philanthropic community to join in. We will fill this gap.”

“We are thankful for the Mayor’s leadership on an issue that is so crucial to many families’ economic security and to the long-term success of Atlanta’s children,” said Stephanie Blank, board chair of the Georgia Early Education Alliance for Ready Students (GEEARS), which leads the PAACT: Promising All Atlanta Children Thrive initiative. “Childcare and preschool programs are integral to Atlanta’s economy, and this public-private investment sets an example for communities across America.”

The mayor also announced his plan to add 250 new police officers by the end of the year. 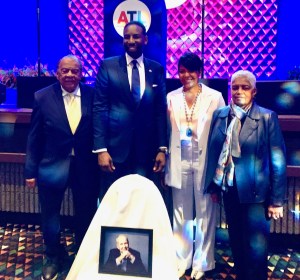 Atlanta’s mayors pay tribute to the late Sam Massell, who passed away three weeks before the State of the City breakfast. (Photo by Kelly Jordan.)

He announced the formation of an affordable housing “Strike Force” with support from JP Morgan, Wells Fargo and Invest Atlanta, the relaunch of the “Pothole Posse,” a significant living wage increase for workers at Hartsfield-Jackson International Airport, an internship and summer jobs program for Atlanta’s youth and efforts to clean the streets of the city.

Dickens also urged people to vote for upcoming bond referendums: “T-Splost 2.0” for transportation, which will fund bridges, sidewalks and roads, and a public improvement bond and infrastructure investment.

“To make this happen, we need everyone’s support,” Dickens said. “Together, we are going to move Atlanta forward.”

The mayor also noted the breakfast was being held on April 4 — or 404 day — alluding to Atlanta’s main area code, proclaiming it “404 day in our city.”

The breakfast had a fresh spirit to it. Instead of the mayor walking in after a grand ceremonial entrance with the color guard, Dickens entered the Thomas Murphy Ballroom at the Georgia World Congress Center accompanied by a few police officers and festive background music.

The breakfast also included performances by the Trey Clegg Singers and a live painting of the event by performance artist Janssen Robinson. 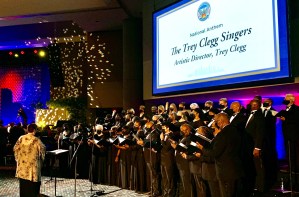 The Trey Clegg Singers at the 2022 State of the City breakfast. (Photo by Kelly Jordan.)

In office for exactly three months, Dickens said he made the decision “to put the city in overdrive.” He also declared that City Hall was open again as we appear to be “getting to the other side of this pandemic.”

The mayor also thanked his predecessors, several of whom were in the room: former Mayors Andrew Young, Keisha Lance Bottoms and Dickens’ “mentor” Shirley Franklin. There also was a seat, draped in white, with the placard acknowledging the late Mayor Sam Massell, who died three weeks ago. Dickens said Massell was a member of his transition team.

The mayor also implied he would be running for re-election.

“By the end of my eight years in office, Atlanta will be the best place in the country to raise a child,” Dickens said. “My vision is moving Atlanta forward together. As you know, I draw circles. I don’t draw lines… We will be one city with one bright future together.”

On cue, the Trey Clegg Singers closed out the program by singing “Draw the Circle Wide.” 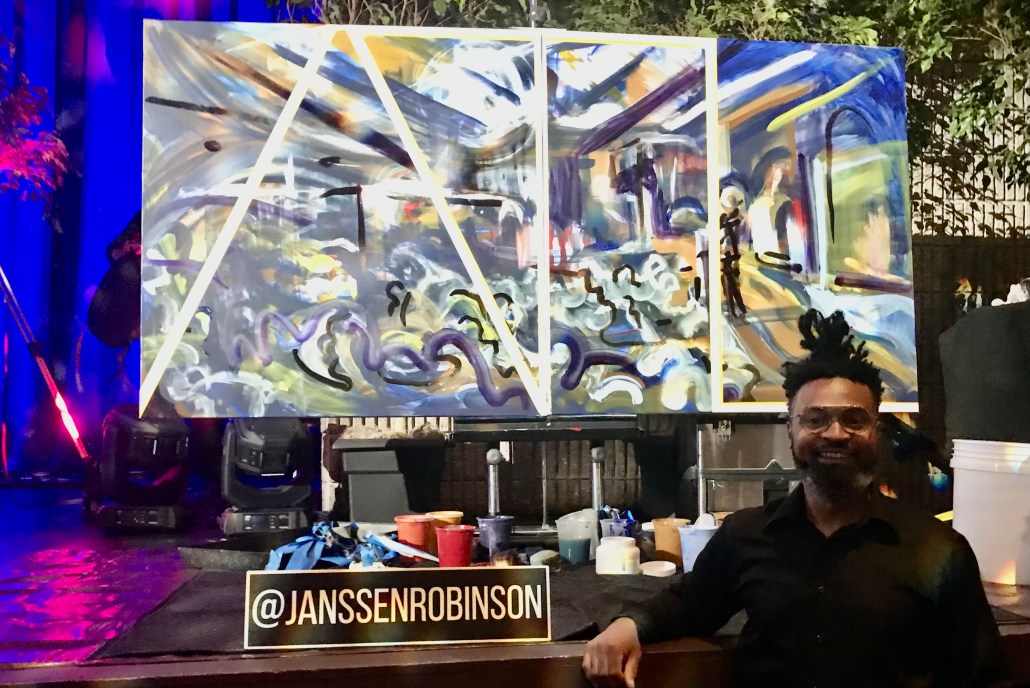 Artist Janssen Robinson stands in front of his creation painted during the breakfast. (Photo by Maria Saporta.)