Andrew Young: Mayor Reed and city commit to Mount Vernon that it will help church continue its ministry

Mount Vernon Baptist Church received the support of two Atlanta mayors Tuesday night as it weighs its option on whether to make way for a new Falcons stadium.

Atlanta Mayor Kasim Reed and former Atlanta Mayor Andrew Young met with Rev. Rodney K. Turner and members of his congregation to talk about the status of negotiations with the Georgia World Congress Center Authority.

“We are all committed to continuing the ministry of this church in this community,” Young said after the meeting. “The mayor (Reed) made a commitment to work with them to continue their ministry at an improved site and circumstances.” 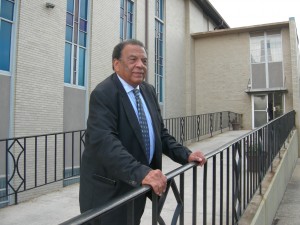 The Atlanta Falcons, the state and the city would need to acquire two historically-black churches as well as several other pieces of property in order to locate a new football stadium on the preferred site south of the Georgia Dome.

Talks between Mount Vernon Baptist Church and GWCCA have broken off because both sides are so far apart. GWCCA’s latest and final offer was $6.2 million based on appraisals of the property. Mount Vernon has countered with a $20.3 million proposal so it would be able to rebuild the church and expand its ministry.

Rev. Turner had called a “family meeting” for Tuesday night to bring everyone up to date on the status of negotiations. But Turner and members of congregation had little to say to members of the press after the meeting ended. 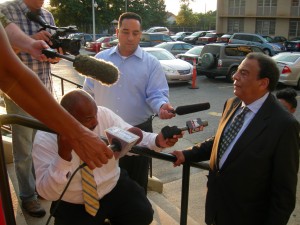 “Keep us in your prayers,” Rev. Turner said as he got into his truck when leaving the church. He did hold up a thumbs up sign.

Mayor Reed also was able to slip into his SUV without talking to the press, speeding away about half-way through the meeting. When reached by phone shortly after, Reed was asked how the meeting went.

“It was good,” said Reed, who did not elaborate, saying he was on his way to another function.

Young, however, said that Reed set the tone for the meeting, which he described as “very positive.”

Asked whether they were able to discuss the various offers that had been on the table, Young said: “We talked ministry. Money is irrelevant.”

Young did come out to meet with reporters and provided brief comments. He was accompanied by Seana Turner, Rev. Turner’s daughter. 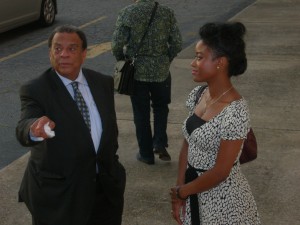 Reed, who handled negotiations with the second church — Friendship Baptist Church, announced last week that an agreement had been reached. Friendship had tentatively agreed to be acquired for $19.5 million.

The congregation still has to approve the deal, and that vote — once planned for Aug. 18 — has been delayed for at least a couple of weeks, according to Lloyd Hawk, chairman of Friendship’s board of trustees.

Because land on the south site was not acquired by the Aug. 1 deadline, the Atlanta Falcons and GWCC have started exploring the feasibility of building the stadium on a site that is about a half-mile north at the corner of Northside Drive and Ivan Allen Jr. Boulevard.

The official word from the Falcons and the GWCC is that the south site is not feasible and that they are now focused on the north site. 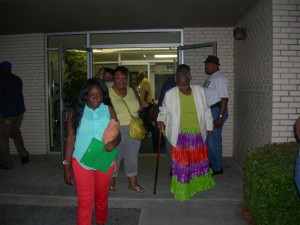 Reed, however, has urged the Falcons and the state to stick with the south site because of its significant advantages. Specifically, the south site is sandwiched between two MARTA stations and it is adjacent to the main campus of the convention center.

Also, if the stadium were to be located on the south site, the project could be designed to be part of future downtown development plans as well as a way to boost the economic prospects of the Vine City and nearby communities.

“A $1 billion stadium will have the same impact as the aquarium did on downtown,” Young said, adding that one option for Mount Vernon would be to locate near the proposed Mims Park in Vine City.

Attending the Mount Vernon meeting with Young and Reed was Rodney Mims Cook, who has been behind the proposal to develop Mims Park.

Previous Article
Enticing Potential Buyers to Your Home
Next Article
Journalist Bill Shipp, enjoys his 80th, marveling at how many friends he has — now that he’s no longer writing