Former Atlanta Mayor Andrew Young received the Council for Quality Growth’s Four Pillars Award on Oct. 14 at the Georgia World Congress Center. Upon accepting the award, Young reminded the more than 1,100 people attending the gala in person (and another 400 watching via livestream) that Atlanta is a special place.

“There always was something quite unusual about this city,” said Young, who told stories about former mayors William Hartsfield, Ivan Allen Jr., Martin Luther King Jr. and Helen Bullard, an unsung Atlanta hero. “I have come to believe that what we are doing here is ordained by God. There is no way I can explain the miracle that is Atlanta. We have been blessed.” 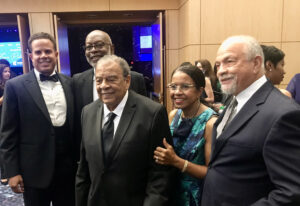 Young talked about Mayor Hartsfield’s “Plan for Improvement” and Mayor Allen’s “Platform for Progress” – two aspirational visions of how Atlanta could become one of the leading cities in the country.

“Almost everything you see around here now was on that list,” Young said. “Atlanta was not something that was invented…. Together everything we now celebrate, they helped to fulfill.”

Young also said that the person who invented the slogan: “Atlanta: A city too busy to hate,” was political insider Helen Bullard, who never received proper credit for how she helped pull the city together.

“We have come a long, long way, but we still have a long way to go,” Young said. “The struggle continues, but we shall overcome.”

Most of the evening, however, was devoted to celebrating Young’s life – recognizing all the contributions he has made throughout his life – from working besides King during the days of civil rights, serving as U.S. Representative for Georgia District 5, joining the administration of President Jimmy Carter as U.S. ambassador to the United Nations, being elected mayor of Atlanta and serving two terms, co-chairing Atlanta’s efforts to bring the 1996 Summer Olympic Games to the city and serving as chair of the Metro Atlanta Chamber during the games. 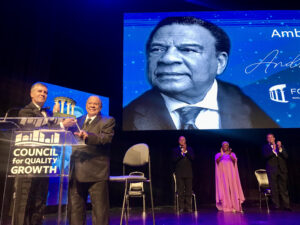 Young has continued to work on numerous philanthropic efforts through the Andrew Young Foundation as well as other causes. He also has helped produce countless documentaries and written several books.

Among the speakers at the event included Ed Bastian, CEO of Delta Air Lines, who said it was fitting that both Young and Delta were born in Louisiana.

“It’s hard to find someone who is more of a visionary than Andrew Jackson Young,” Bastian said. “He saw the potential to change the course of history. He is one of the greatest visionaries I’ve ever known.”

There were videos from Vice President Kamala Harris, who said she was glad to call Young a friend and mentor “Ambassador, you are a dreamer and a doer.”

Former President Bill Clinton said in a video that the world is a far better place because of Andrew Young.

And former President Jimmy Carter wrote a personal letter thanking Young for his service to the country.

Young’s son, Andrew Young III better known as “Bo” said his father embodies the statement: “To whom much is given, much is required.” 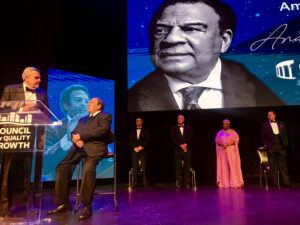 Billye Suber Aaron said it has been “many years since Andy came into my life. I love you for who you are. I appreciate you for being plain old Andy Young. There is a destiny that makes us sisters and brothers.”

Michael Paris, president and CEO of the Council for Quality Growth, said Young’s imprint will live for generations to come.”

The evening also included entertainment and several musical tributes, including a video performance from singer Vince Gill, who sang his unpublished song, “March On, March On,” about the ongoing fight against racism in America.

In accepting the tribute, Young summed up the spirit of the evening by simply saying: “There’s something very special about this city.”