From CHOA to the White House, via NASCAR

Andrew Childers nearly died playing high school football, hung on to compete at a smaller college, and appeared far removed from the sports fame that earns the highest national accolades. 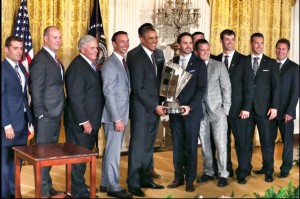 Andrew Childers, second from left, with the Hendrick Motorsports team led by driver Jimmie Johnson. The team visited the White House earlier this year after winning the 2013 Sprint Cup championship, NASCAR’s equivalent of the Super Bowl.

And yet this year he and his team were guests at the White House, where President Obama complimented his team’s athleticism and inspired the best sort of hyperbole that comes with stories this dramatic. “A Cinderella story that could be an encouragement to others who face their Goliaths year after year,” his mother Marcia Childers calls it.

The unexpected link in this chain of events: NASCAR. Childers got to the White House using his strength and speed from football to help change tires as the jack man for 2013 NASCAR champion driver Jimmie Johnson, who drives the No. 48 Chevrolet.

“It was pretty unreal,” Childers, 29, said of the White House trip. The adjective fits the rest of his story too.

Resurrected from the football field

Childers’ torso carries a sternum-to-navel scar where doctors removed his spleen in 2002, a souvenir of his near-miss with death from a football injury. (Shortly after his surgery at Children’s Healthcare of Atlanta at Egleston, he and his parents granted me an interview published in the AJC.)

He was a senior, two-way starter (tight end/defensive end) and captain of the Tucker Tigers, who were ranked No. 3 in Georgia. A scholarship at an NCAA Division I school was his goal and not a long shot, either.

Against St. Pius, Childers hit the ground after a catch and “felt like the wind was knocked out of me permanently,” he said then. He joined the other players behind the bench, then turned gray and passed out. He nearly bled to death waiting for an ambulance.

Doctors at Egleston said that during surgery his blood pressure dipped to 40/20. He received 22 units of blood during two operations. The episode represented what so many football parents fear especially this time of year, that their sons will be the ones who hit the ground and don’t get up.

Jacked up about racin’

The injury and surgery diminished Childers’ dream of playing at the highest level of NCAA football. He didn’t play during the regular season, and lost 30 pounds. Recruiters lost interest.

He ended up at Samford, a Baptist school in Birmingham whose football team plays in Division I-AA, a notch below the better teams where Childers always had imagined himself playing. But he made peace with his choice, and kept working.

After graduating with a degree in graphic design in 2006, he remained intent on a career in pro football and prepared to try out for the NFL. But another injury, this time to his hamstring, pushed him in yet another new direction. His college roommate and football teammate had interned for one of the most successful NASCAR teams—Hendrick Motorsports—and suggested Childers try out for a pit crew.

It’s hard to predict who will have the right stuff for this niche job performed under pressure. When the car pulls into the walled Pit Row, the crew of six has about 12 seconds to jump over the wall, change four tires, fuel up and get out of the way. The faster they are, the faster the car is.

“If you do 12.8 seconds [for a pit spot], you might lose a spot,” Childers said of the Sprint Cup standings, which rank driver performance at the highest level of NASCAR. “If they don’t talk about you on TV, you are doing your job. Pit crews like to fly under the radar. That’s the way to not be fired.”

The job is a combination of speed, strength and fine motor skills, literally and figuratively.

Andrew Childers (front left) tweeted this photo of the pit crew earlier this month. Driver Jimmie Johnson is in red.

“If you trained as a miler in track, you wouldn’t be the ideal pit crew guy,” Childers said. “Crews draw from all walks of life. Some are guys who worked on cars their whole life, who are terrible athletes but who have learned to do pit stops. You’ve also got athletes who don’t know anything about cars.”

The 6-foot-2, 235-pound Childers had the explosive speed, strength, quickness and agility to carry the 35-pound jack. Playing quarterback and defensive end had taught him to pay attention to detail and focus on technique. He was used to a long season and discipline of daily physical conditioning.

And he loved cars. Since high school, he loved tweaking his own car. I had vacationed in Daytona Beach every summer and attended the Talladega race a couple of times in college. “What I always liked about it is the speed,” he recalled. “In Daytona, when they fly by the fence, it’ll blow your hat off. There’s not a lot of words that can describe it, but when you see it, you see how fast it is.”

Childers worked first with driver Austin Dillon and helped him become 2010 Rookie of the Year in the truck series. Childers then got assigned to Clint Bowyer’s No. 33 car that won Talladega, which was Childers’ first Sprint Cup victory. He worked with Jeff Burton’s No. 31 car before joining Johnson’s crew, which in 2013 won the NASCAR equivalent of the Super Bowl.

An invite to 1600 Pennsylvania Avenue

In late June, Childers and the rest of the Johnson team visited the White House, and President Obama singled out the pit crew for special attention.

Andrew and Kirstein Childers in Las Vegas at the celebration of the Sprint Cup Championship. Childers is on the pit crew for six-time champ Jimmie Johnson. (Special)

“Jimmie knows that without … the entire team at Hendrick Motorsports, he would be just another mortal making left turns,” Obama said.

This year has been big for other reasons, too. Childers’ wife Kirstein, a former Samford volleyball player, is expecting their first child. They live in Lexington, N.C. His parents live in Orangeburg, S.C. and his sister and her family live in Lilburn.

His mom Marcia had a premonition a dozen years ago.  “This might be an indication God is leading him in a different direction,” she said, when we met after his football near-death experience. “We’ll see what the plan is.”

Now her son can look back and see how misfortune ultimately steered him to a better finish. It’s his message to other young people who suffers injuries and other setbacks on their way to their goals. Reinvention, even when forced, can be a very good thing.

“That injury changed my whole life,” Childers said. “If I hadn’t ruptured my spleen, I would have never played at Samford. I met my wife there and my roommate, who got me interested in the pit crew. It changed my course of life.”

He would have never heard the President say this about him, either: “I love watching the pit crew. I don’t know how you all do it, but it is amazing. And to see the teamwork and athleticism, it’s just remarkable.”