Anna Roach at the main entrance to the Atlanta Regional Commission's offices. (Photo by Maria Saporta.)

For Anna Roach, being executive director of the Atlanta Regional Commission is the job she dreamed of getting.

When she was working at Fulton County — first as chief strategy officer and then as chief operating officer, her boss, Dick Anderson, asked her to name her dream job.

“In 2016, I told Dick my dream job would be to run ARC,” Roach said in a recent two-hour interview at the Peachtree Center space that houses ARC. “I could zoom out and look at how things should work and rethink how government and public entities can deliver better outcomes.”

At Fulton County, so many issues she encountered didn’t stop at the county line — homelessness, housing, aging and youth, transportation and infrastructure. 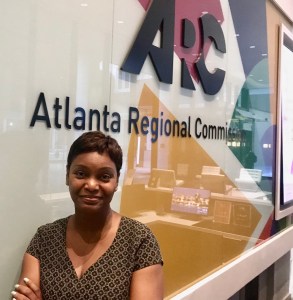 Anna Roach is living out her dream job as executive director of the Atlanta Regional Commission. (Photo by Maria Saporta.)

Anderson, Fulton’s county manager, remembered their conversation about her dream job. So, when Doug Hooker announced last year he would be retiring as executive director, Anderson encouraged Roach to go for it.

“I have spent seven years working with Anna, and I have an enormous amount of respect for her,” Anderson said. “She has a great understanding of the issues facing metropolitan Atlanta. She also has the ability to make the complex simple. It’s a place where she can bring all her skills to bear. In my mind, it is just a perfect fit. She’s going to do quite well, and we will all benefit.”

In her first interview since taking the helm at ARC last month in a transition period with Hooker, Roach could not hide her excitement about the job.

“It was my dream job,” Roach said. “I just saw it as a huge opportunity to be part of making a difference at a much higher level. When Doug Hooker announced he was retiring, I did not see that coming, I was surprised at the opportunity. It just made all the sense in the world for me. Now, after 30 days on the job,it’s clear that ARC is exactly where I’m supposed to be.”

Roach was born in Jamaica, where she lived until she was 13 years old. Her parents moved to the United States two-and-a-half years earlier to get settled before bringing Roach and her younger sister to New York. During that time, Roach and her sister lived with their aunt in Brown’s Town in St. Ann Parish.

“I’m a little country girl,” Roach said laughingly. That changed when she moved to New York City, where she entered the 8th grade. Her education in Jamaica prepared her academically, and she didn’t skip a beat.

Her father had been a firefighter in Jamaica, and he became a fire inspector in New York. Her mother started as a nurse’s aide, and then went on to become a nurse.

“We were raised by a nurse and a firefighter,” she said. “It was a family of public servants who cared for those in harm’s way.”

When she first started college, Roach thought she wanted to be a doctor but then changed her mind.

“I fell in love with words. I like to debate and form arguments,” she said. “To my mother’s chagrin, I went from pre-med to pre-law”

Upon graduation, she ended up working for the public defender’s office in the criminal appeals bureau, but it was when she joined the Law Office of Bruce Barket as a private appellate attorney that she helped overturn the high-profile conviction of Martin Tankleff, who had been accused of murdering his parents but said he was innocent.

“I wanted to change the world,” she said.

One of her friends from college, Orpheus Heyward, had graduated with his divinity degree, and he came to Atlanta to be the understudy at the West End Church of Christ. In 2005, he was going to preach his first sermon, and Roach and her husband at the time decided to come for the event.

The minute she landed at Hartsfield-Jackson International Airport, Roach had fallen in love with Atlanta. 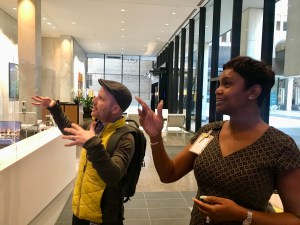 ARC’s Paul Donsky and Anna Roach looks over the entrance sign to the planning agency’s offices in Peachtree Center. (Photo by Maria Saporta.)

“It was like the city welcomed me with open arms,” Roach said. “We made the decision to move to Atlanta within a year.”

At the time they moved to Atlanta, they had a son, Dwayne. Then Roach got a job teaching at the Greater Atlanta Christian Schools. Two years after giving birth to her daughter, Chelsea, her marriage ended. As a single mom, she decided she couldn’t live on a teacher’s salary. Her parents moved from New York City to South Fulton, to help her.

“I had to figure out what direction my life was going to take,” Roach said. A friend from high school, Charles Tucker, had recently joined the administration of Washington, D.C. Mayor Vincent Gray. “He wanted me to be assistant deputy general counsel.”

So, Roach began commuting to D.C. every week, spending Tuesday through Thursday there and spending the rest of the time in Atlanta.

“I met Mark Roach on one of my trips. He is the love of my life,” Roach said. “He became a support system for my mom and dad.”

Then her mother got a rare form of cancer. “It started a long journey with her trying to fight this disease,” Roach said. “When she was diagnosed, I dropped everything in D.C., and I came back to Atlanta to become my mother’s caretaker. She was diagnosed when she was 58, and she lived until her 62nd birthday.”

Roach’s younger sister moved down from New York to help her, choosing to live in a high rise in Buckhead.

“She loves it here as well,” Roach said. “Her life is so very different from mine. There’s a place for everybody in the Atlanta region. That’s the beauty of it. My whole family found a way to relocate to Atlanta and live the life that made them happy. There’s something for everybody here.”

Anna and Mark Roach got married before her mother died. They have a daughter, Ava, and Mark had a son from his first marriage, Cameron. That’s how she became a mother of four children ranging in age from 7 to 17 years old.

“The other blessing is that we are all great co-parents; the six of us co-parent,” Roach said. “All the parents are in these kids’ lives. We’re a blended family.”

Roach got back in government after meeting Dwight Ferrell when he was at MARTA, and she had a consulting contract with the transit agency. When Ferrell became Fulton’s county manager, he reached out to her to join his team. 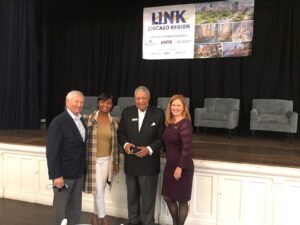 “That’s how I ended up at Fulton in 2013,” said Roach, who went from being Fulton County’s chief strategy officer to chief operating officer. “There was a lot of transition at Fulton, and then Dick Anderson became county manager.  Under his leadership, we had an amazing team. We got so much accomplished.”

As she sees it, the Atlanta region has an opportunity to work together as never before.

“There are new faces at the table,” Roach said. “We have a lot of opportunity to strengthen the connections to make us successful as a region.”

When asked what success at ARC would look like in her mind, Roach quickly answered.

“I would like for ARC to be without question the highest performing regional agency in the country in terms of outcomes as a planning agency,” Roach said. “We are going to put a stake in the ground as a region, and we are going to measure progress against those commitments. To get things done, we have to think differently.”

Now Roach is looking forward to putting her imprint on the region – an effort that will be fueled by what she calls transformational infrastructure investment.

“It’s not just about roads and bridges. It presents a real opportunity,” she said. “My vision for the agency is that we work with our member jurisdictions and partner agencies to make the most of the transformational investments headed to the region.  At the end of the day, it is about what we are delivering, and we have to be outcome-oriented.”

Roach is able to stay grounded in part by gardening and returning to Jamaica every year.

“It’s my happy place. My mother is buried there next to her mother,” Roach said. Gardening was a passion she shared with her mother. And she still uses Betsy the pick-up truck to get gardening supplies. “It helps me stay connected with my mom,” she said. “I love to grow stuff.”