Most recently, Burriss has been director of economic development for the Georgia Health Sciences University, where she has worked since 2007.

“I never dreamed I would be leaving Georgia,” Burriss said. “I’m an 8th generation Georgian.”

But Burriss said that when the opportunity presented itself, her boss — GHSU President Ricardo Azziz — told her: “If you’re lucky, you might get two or three shots in life for a fresh start.” 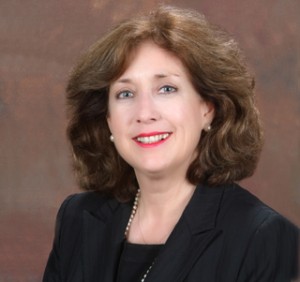 For Burriss and her husband, Woody, “This is a full fresh start.”

The job was appealing because it intersects several of Burriss’ interests — the intersection of where business, government and academia come together.

In fact, Burriss said the George Mason campus is focused on biomedical research, and it is viewed as top up-and-coming universities by U.S. News & World Report, she said.

In many ways, it reminds Burriss of the unique partnership that exists between Georgia Tech and Emory University, with the Biomedical Engineering Curricular joint venture. Burriss wrote doctoral dissertation on a case study of that partnership receiving her doctorate in higher education management at the University of Pennsylvania in 2010.

“It’s an extraordinary university,” Burriss said of her new role. She also will be a professor of higher education for the George Mason University’s Prince William campus.

For most of her 30-plus year career, Burriss has worked in the fields of economic development and education.

She became vice president of economic development for the DeKalb Chamber of Commerce in 1988 and then jointed the Georgia Board of Regents in 1995 working in the areas of economic development and services. Then in 2003, Gov. Sonny Perdue tapped Burriss to serve as a senior advisor and as executive director of the Commission for a New Georgia.

Then in 2005, Burriss joined Oglethorpe University as its associate provost for its evening degree program and as deputy to the president for community affairs. She stayed at Oglethorpe until joining GHSU — then the Medical College of Georgia — in 2007.

Burriss will begin her new job on Oct. 15.

Previous Article
With service in their marrow, metro teacher gets transplant from British student
Next Article
‘Trouble with the Curve’ — Clint Eastwood throws late career curveball