The Atlanta Press Club and Georgia Public Broadcasting pulled off the most challenging series of political debates in the history of their 27-year partnership. 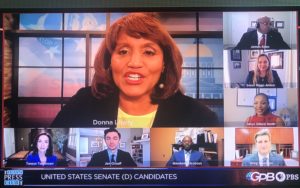 The threat of COVID-19 was almost an after-thought as we wondered what precautions we should take if one of the candidates contracted the virus and would not be able to come to GPB’s studio in person.

As the weeks went by and the epidemic turned into a pandemic, it became apparent we wouldn’t be able to put on our normal, in-studio debates.

“When the committee got together for the first time, social distancing wasn’t a thing,” said Lauri Strauss, the debate coordinator for the Atlanta Press Club who has been involved with the debates since 2007. “But the restrictions just kept evolving, and we had to evolve with them. We never imagined we’d be putting on debates where everyone was doing in from their own homes.”

On Sunday and Monday, GPB and APC actually pulled off 10 debates with dozens of candidates. The APC’s Loudermilk-Young Debate Series was a virtual endeavor made possible through the partnership with GPB, which ended up selecting the Cisco WebEx platform. Then during the past several weeks, GPB tested out the technology. And the APC then had to interface with all the candidates to make sure they were properly trained to use the system.

As expected, there were some hiccups – mainly with the audio due to all the open mics on some of the debates. 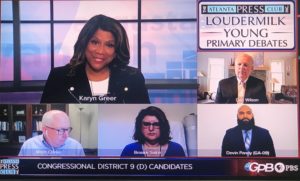 Karyn Greer, with CBS46 – WGCL, moderated the Democratic debate for Congressional District 9, a seat now held by U.S. Rep. Doug Collins, who is running in the open U.S. Senate race.

“Please mute yourselves,” she pleaded at one point. “We’re getting feedback. It’s important to mute your mics when you’re not speaking. We are all learning together to change the way we handle these debates.”

Greer then provided the perspective to viewers.

“We want to thank all our candidates for joining us in this very different type of debate. I’ve been doing these for many years now, and this is the first time we’ve had to do it this way because of this coronavirus pandemic,” she said while thanking APC and GPB. “They’ve done a marvelous job of making this happen and giving all the residents of Georgia an opportunity to see the candidates.”

One of the funnier moments was when GPB anchor and moderator of the Republican debate for Georgia’s 9thCongressional District realized that her laptop was running out of juice, so she had to get up to get a charger.

“I now have to plug in my laptop,” said Bevington, who was only gone a few seconds. “I’m mortified. 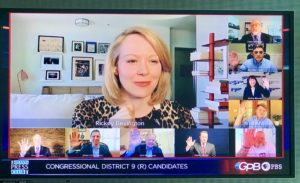 The signature debate during the primary season was between the six Democrats in the U.S. Senate race – running to be the candidate that will face U.S. Sen. David Perdue (R-Georgia) in the fall.

The only major “no-show” during the debates was U.S. Rep. David Scott (D-13th Congressional District), who declined to participate in the debate with three opponents.

In the round when the candidates question each other, Michael Owens decided to ask his question to Scott in absentia. He wanted to know why Scott often votes with Republicans, and then he questioned why Scott didn’t live in the district. And then he looked over to the two other candidates in the debate and said: “I’m the only one who actually lives in the 13th District.”

Former state Rep. Keisha Sean Waites, who said candidates are not required to live in the district, also took a shot at Scott. “The absence of the current seat holder is indicative of actually why we are running,” she said. “I think that right now, given the urgency of COVID-19, our leaders have to show up. That’s imperative to getting anything done.” 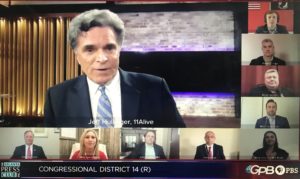 In many ways, these debates are a prelude to what will be the real match-ups – the run-off elections after the June 9 primary. The Atlanta Press Club and GPB will be holding run-off debates – most likely in the studio. Because there will only be two candidates at the podium, it will be much more manageable to have social distancing. Stay tuned.

“Every year there’s something new. Nothing is ever routine,” Strauss said laughingly. “These debates are more important than ever. Because of the pandemic, candidates are not able to go out and campaign as they normally would. We knew we needed to provide the debates as a public service.”

The purpose of the debates is to have a more informed electorate. All the debates are available for viewers to watch on demand at: www.fb.com/TheAtlantaPressClub and GPB.org.  The more voters know about the people running for public office, the stronger our democracy will be.

Thankfully, retired businessman Charlie Loudermilk believed in the debates, and he donated a $1 million endowment to the Atlanta Press Club, which named the debate series in honor of his unique friendship with former Atlanta Mayor Andrew Young.

Loudermilk’s generosity will permit the Atlanta Press Club, and its key broadcast partner – GPB, to be able to put on debates in perpetuity.

Thanks to the leadership of GPB President Teya Ryan, the relationship between the APC and GPB has never been stronger. Putting on the debates is no easy feat. It takes the cooperation of the candidates, the journalists who serve as moderators and panelists and the countless people who are involved behind the scenes.

Here are the people who helped put on the most unusual debate series in our history. 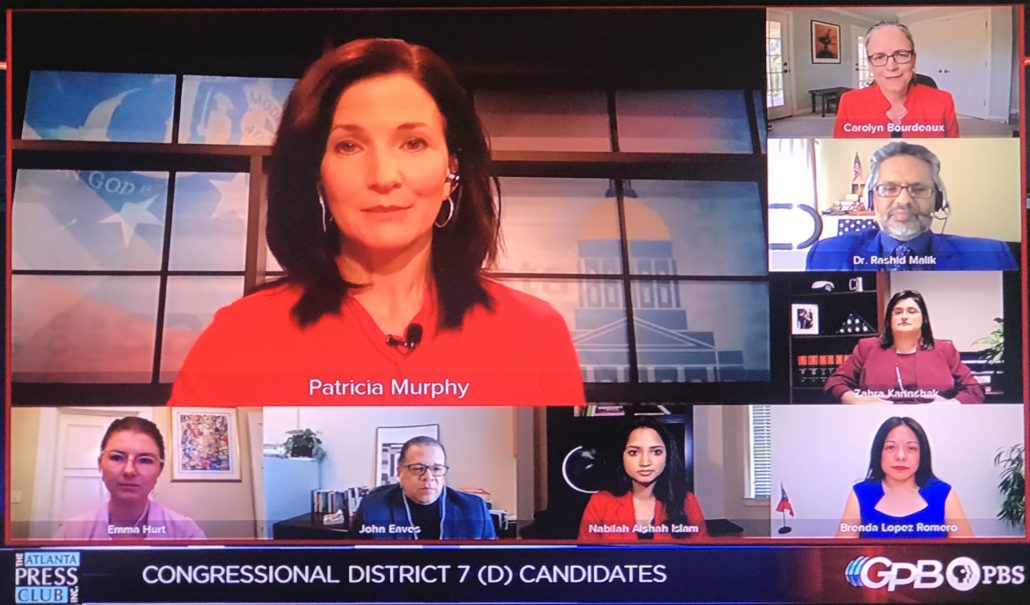 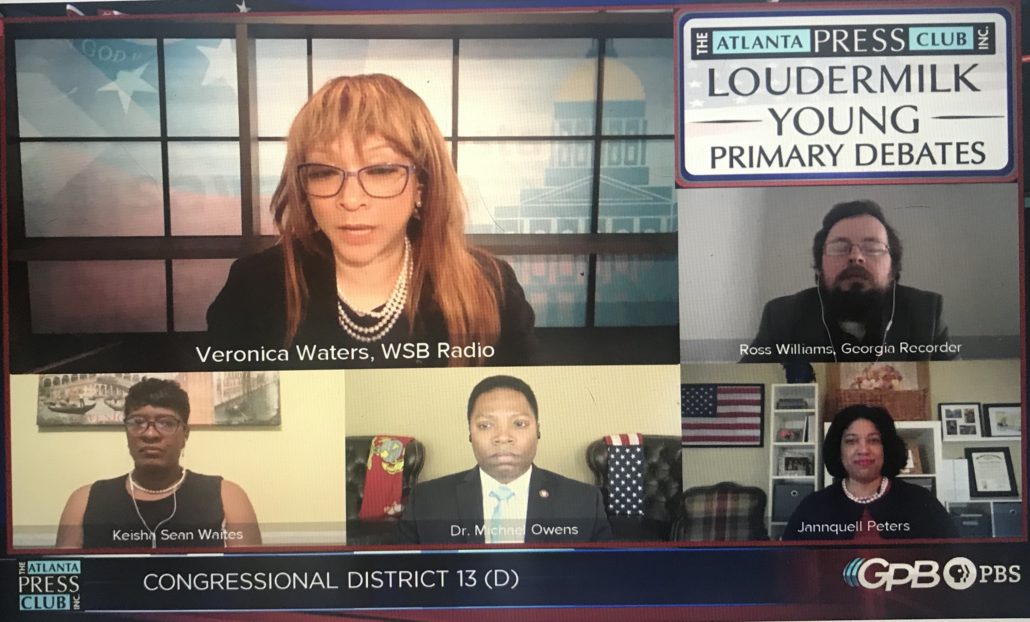 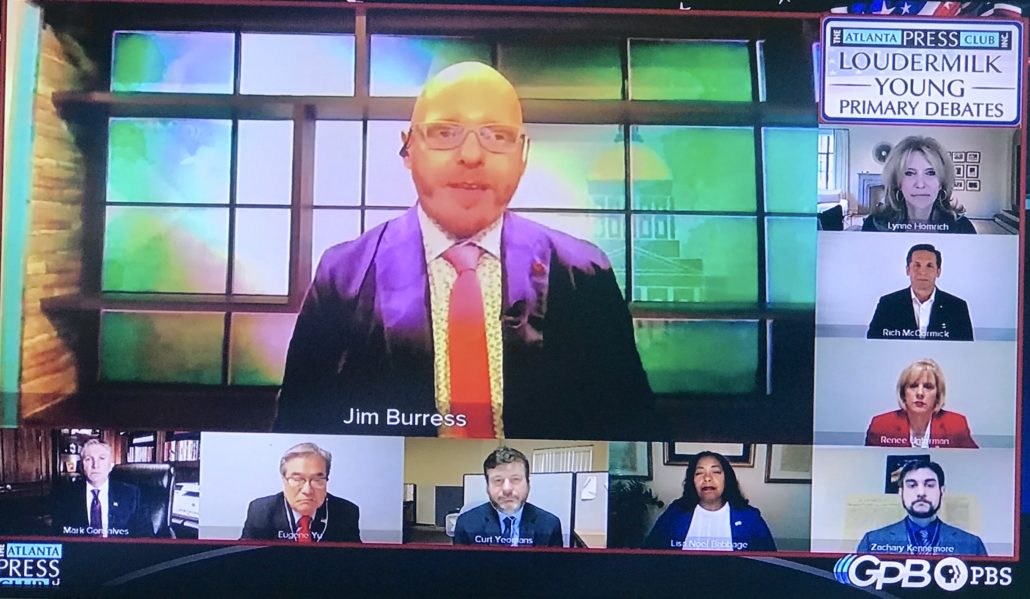 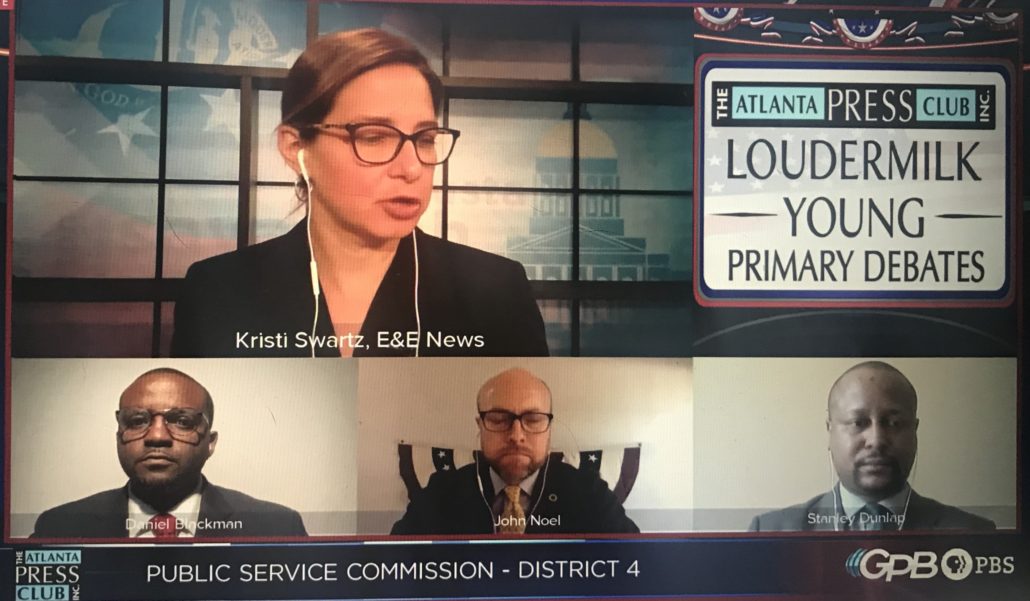 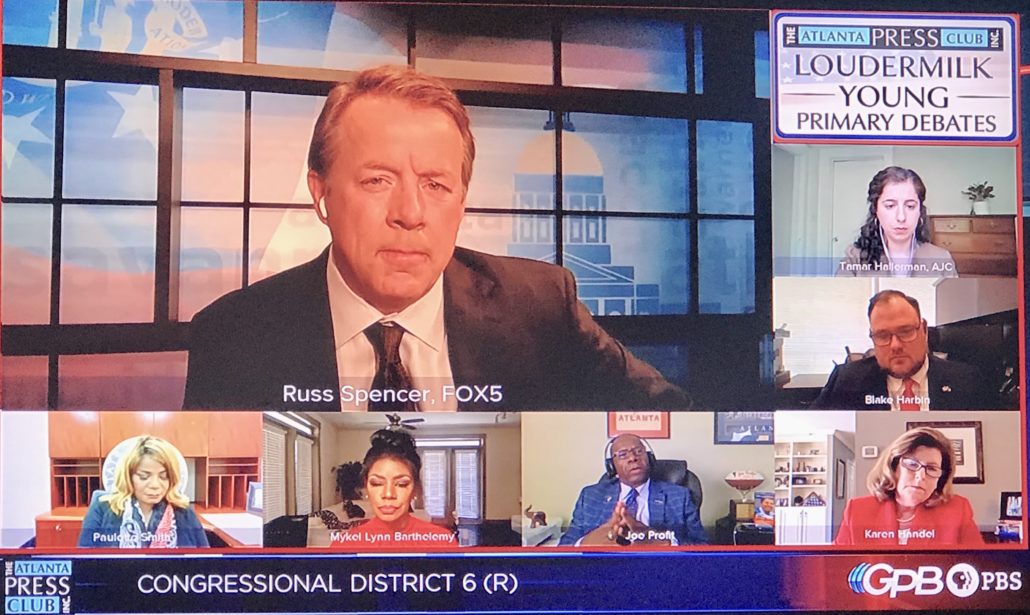 Previous Article
Socially distanced candidates stuggle to control their messages, and their laptops
Next Article
BoxLock provides a ‘contactless’ way to stop packages from being stolen