APS asks stakeholders for financial support, mentoring during State of the District event

Atlanta Public Schools hosted an immersive experience at the Illumniarm for its State of the District event. (Photo by Allison Joyner.)

The superintendent wants to build on the recent success achieved by the school system.

Atlanta Public Schools hosted an immersive State of the District event to motivate administrators and community partners, encouraging a technology-based future for their students.

The district presented its plans for innovative education at the interactive Illuminarium to create the background for its theme: APS2036.

Chosen as the year their enrolled four-year-old students will be 12th graders, APS2036’s mission is to imagine what the world would be like when these students pursue careers or go to college after graduation.

“What we want to do is think about what the future looks like for them and what education needs to look like as a result of that,” said Dr. Aleigha Henderson-Rooser, Assistant Superintendent for Instructional Technology at APS.

Exposing students to tools like artificial intelligence and devices may prepare them for jobs that currently do not exist. One of those tools is laptops that have 4D capability. As one of the first school systems to have this technology, the 4D laptops give the user a 3D experience without visual equipment like glasses or headgear.

“The 4D experience allows you to dissect a heart and see what the blood platelets look like moving through the veins,” Henderson-Rosser said. “You can dissect a frog, a fetal pig. I can create a mechanical arm. Those are the experiences that we want our students to have because it taps into their interests.”

She told SaportaReport that currently, the district could only fund the installation of these laptops in some schools. That is why APS announced they would campaign for $15 million this year and $30 million over the next three years. 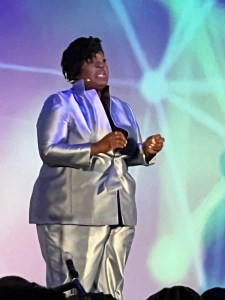 “When we’re serving human beings, particularly the smaller ones, there’s always a need for more that’s above and beyond that budget,” said Dr. Lisa Herring, Superintendent for APS. “That’s where fiscal resources are important and philanthropic through grants or funding that will continue to exist.”

In addition to sharing their new endeavors, Herring informed community partners of achievements, like matching the state’s graduation rate of 84 percent, the highest for the public school system.

“We monitor the academic, literacy and numeracy performance of all scholars regularly and monitor that data to provide interventions that ensure success,” Herring said.

Herring also addressed her desire for every school to have a corporate partner like the relationship between Benjamin E. Mays high school and tech company Google. Google has agreed to provide certification training for students in data analytics and project management before graduation.

“Scholars at Mays will already be employed at Google to have some level of internship because of this partnership,” Herring said. “But when they cross the state, they’ll work at a high wage or salary position they learned to prepare for before leaving high school. That’s the ultimate goal.”

Another goal Herring has is encouraging mentorship opportunities within the schools.

“Mentoring still exists and we will continue recruiting mentors now,” Herring said.  “So there’s a school for you,”

Additionally, Henderson-Rosser added that Atlanta residents could volunteer at their many schools throughout the city.

“Any way that you can donate your time, your energy or have our students in your space, that’s what we will want you to do,” Henderson-Rosser said.

Click here to see what volunteer opportunities APS has available.