The yellow daisies are in bloom at the Davidson-Arabia Mountain Nature Preserve. (Photo by Kelly Jordan.)

Over the last few decades Arabia Mountain has become a landmark in metro Atlanta, attracting neighbors and visitors alike to explore its vast desert moonscape or catch a sighting of the rare red diamorpha blooms in the spring or the daisies in the fall. 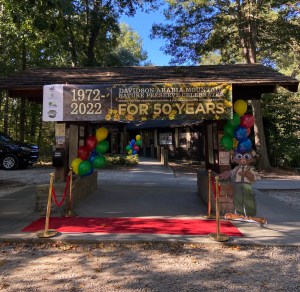 The 50th anniversary event was a festive affair for the folks who have worked hard to make the nature preserve and the surrounding National Heritage Area a reality. (Photo by Hannah E. Jones.)

On Wednesday, Sept. 28, the Arabia Mountain Heritage Area Alliance, DeKalb County officials, local leaders and community members gathered to celebrate 50 years of the Davidson-Arabia Mountain Nature Preserve as we know it today. In 1972, Charles Davidson, Jr. arranged for the Davidson Granite Company to donate 535 acres to DeKalb County, leaving behind a legacy that has only continued to grow.

In the last five decades, the nature preserve has expanded from the initial 535 acres to 2,550, and was designated as part of a National Heritage Area — one of only 55 in the U.S. — meaning the area has been recognized for its historic, cultural and environmental significance.

In addition to the thriving flora and fauna on Arabia and Panola Mountains, the area is also home to the Monastery of the Holy Spirit, with interactive exhibits that share the story of a group of monks who chose Georgia as their home during WWII and Flat Rock Archives, preserving and sharing the history of the rural Black community.

To permanently commemorate the donation that was made 50 years ago, which jump-started the nature preserve as it is today, the Arabia Alliance will carve a small thank-you to the Davidson family into a boulder placed at the base of the mountain. Charles “Chip” Davidson III was also presented with a proclamation from DeKalb County, designating Sept. 28 as “Davidson-Arabia Mountain Nature Preserve Day.” 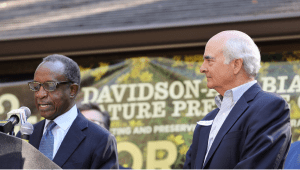 “My great grandfather, my grandfather and my father all lived and grew up here and they’re — I hope — watching from the balcony,” Davidson said. “I’m sure that they would look at what’s come from the donation [with pride].”

DeKalb County CEO Michael L. Thurmond echoed an appreciation for the natural gem, adding that its cultural significance is just as important as its ecological offerings.

“This land was owned by native people and this land was worked by slaves,” Thurmond said. “Today, this land now belongs to all people — Black and white, all religions, all races and that’s why this land is so important.”

When the property was donated in the early 1970s, DeKalb County didn’t yet realize that they’d struck gold. Today, the area remains largely untouched, save for remnants of past human settlement and quarrying. Its mostly natural landscape is part of what makes the nature preserve so special.

“When this property came into the department in 1972, we didn’t really know what to do with the property,” Former DeKalb County Parks Director Becky Kelley said. “So we declared it an ‘undeveloped open space’ and left it pretty much in its natural state, which is probably one of the best things that we could have done until we learned what story to tell.” 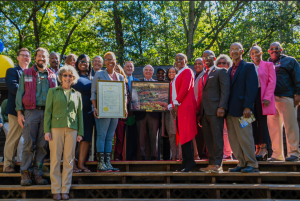 Arabia Alliance co-founder Kelly Jordan, also a member of the SaportaReport team, took the stage to celebrate the power of partnerships. Fittingly, elected leaders from multiple jurisdictions were in attendance, including DeKalb County and the Cities of Stonecrest and Lithonia.

“People ask when the Arabia project will be finished and we like to say that the project is all of these diverse organizations and people working  to make this part of the world a better place,” Jordan said. “Why would we ever want that to be finished?”

Jordan also highlighted local government leaders, nonprofits and residents who worked hard to make Arabia a prosperous outdoor space for everyone to enjoy, including the Nature Conservancy, The Conservation Fund, the Georgia Conservancy, the PATH Foundation, the Klondike Area Civic Association and former Senator Max Cleland.

While celebrating the past 50 years, the Arabia Alliance team is also looking ahead to the next five decades.

“If it were not for that original land donation, I don’t know where we would be,” Arabia Alliance Executive Director Revonda Cosby said. “I’m very grateful for the donation and the wherewithal that your family and company had at the time.”

Cosby continued: “This was well before there was ever an Arabia Mountain High School, no bike trail ran through here, no additional 2,000 acres around it. Now in this part of the U.S., we have something really special that the whole world comes to see. We’ve had people come down here to [learn] what we already know — it’s diverse, it’s inclusive and everyone is welcome at [the] nature preserve.”

The Davidson-Arabia Mountain Nature Preserve, and the surrounding National Heritage Area, boast a variety of trails, historical landmarks and community events, so check out their website to learn more about one of Georgia’s natural landmarks.