An archeological site, a boat and a water tower make Georgia Trust’s 2018 list of Places in Peril 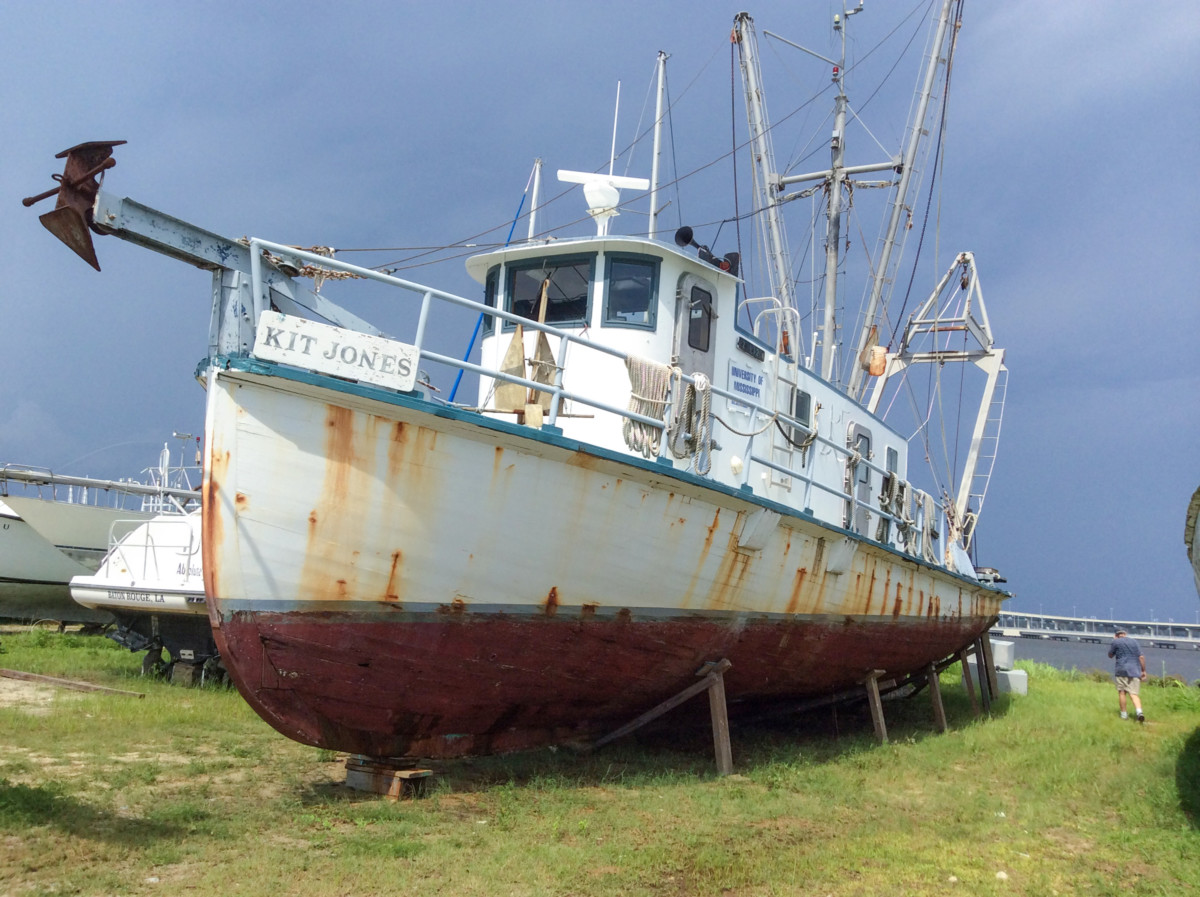 A boat and a water tower are among the Georgia Trust for Historic Preservation’s 2018 list of the 10 “Places in Peril” across the state.

“It’s the first time we’ve had a boat,” said Mark McDonald, president and CEO of the Georgia Trust, which has been publishing the Places in Peril list for the past 13 years. “But it’s a Georgia boat with a Georgia pedigree.”

The Kit Jones Vessel is a 60-foot wood-hull tugboat built on Georgia’s Sapelo Island in 1938/1939 by R.J. Reynolds Jr., the island’s owner and tobacco company heir. Since 2013, the boat has been in drydock in Biloxi, Mississippi – facing an uncertain future. But the McIntosh Rod & Gun Club, a public-private partnership in McIntosh County, acquired the title to the Kit Jones earlier this year with the goal of returning it to Georgia. But the vessel needs substantial stabilization before it can be moved.

McDonald said the Kit Jones is similar tof all the sites on the Places in Peril list because each site has some entity that is working to preserve and restore the buildings and landmarks. They actually sign an agreement with the Georgia Trust to jointly work on saving the structures.

This year, the Georgia Trust is taking it a step further. Before making the official announcement of the Places in Peril list on Wednesday afternoon, the Georgia Trust is providing a seminar for everyone interested in preserving the 10 places as a way to become even more proactive in the state’s efforts to preserve its landmarks.

“This year is a year when we are going to work even more intensively with people to preserve these places,” he said. “We are signing a memo of understanding with each group outlining our shared expectations and understandings.”

The list also seeks to pick sites that are representative of others that need to be preserved throughout the state.

The Cuthbert Water Tower in Randolph County also is a first for the Places in Peril list. Never before has an iconic water tower been included.

“The city government seems to realize that the water tower is an icon of the city,” McDonald said. “They want to save it.”

Through Places in Peril, the Trust encourages owners and individuals, organizations and communities to employ proven preservation tools, financial resources and partnerships in order to reclaim, restore and revitalize historic properties that are in peril.

Among the sites on previous lists that have been saved include:

Updates on these sites and others can be found at georgiatrust.org.

The Georgia Trust was founded in 1973, and it has worked to preserve and revitalize Georgia’s diverse historic resources.

It is one of the country’s leading statewide, nonprofit preservation organizations, and the Georgia Trust generates community revitalization by finding buyers for endangered properties acquired through its Revolving Fund.

The Trust offers a variety of educational programs for adults and children, provides technical assistance to property owners and historic communities, advocates for funding, tax incentives and other laws aiding preservation efforts.

It also manages two house museums – Rhodes Hall in Atlanta and the Hay House in Macon.

The Trust will premiere its 2018 list of the 10 Places in Peril in Georgia at a reception Wednesday evening at Rhodes Hall at 1516 Peachtree St. NW, Atlanta beginning at 6 p.m.

Here are descriptions of the 10 Places in Peril in the 2018 list: 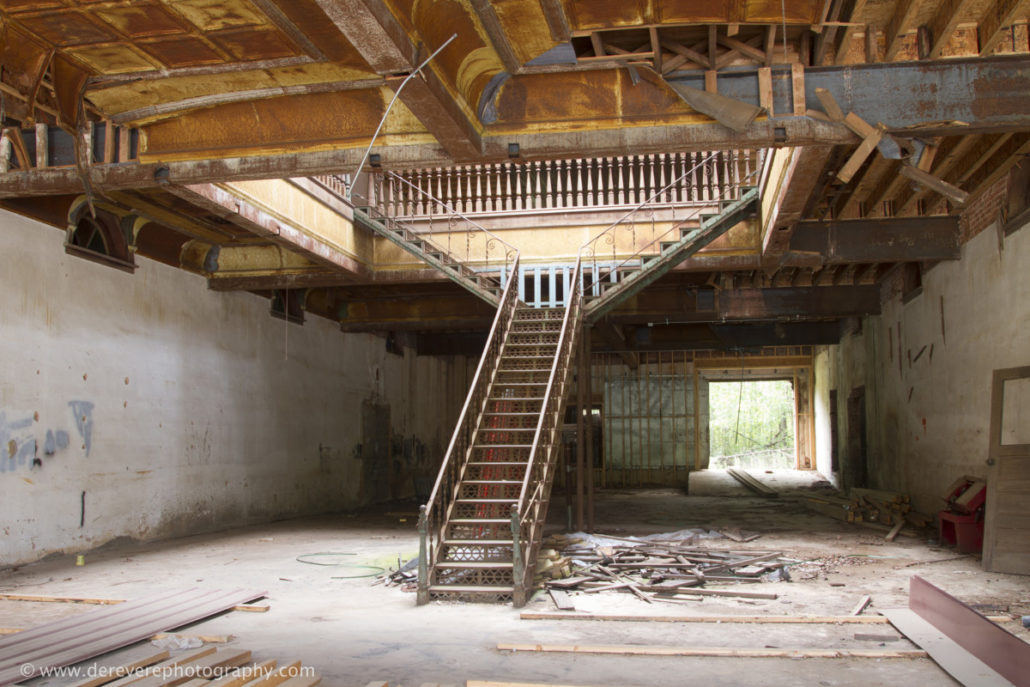 Built in 1907 when Maxeys was a booming cotton town, the A.J. Gillen Department Store was an upscale store that boasted the only elevator in the county. The collapse of the cotton economy in 1929-1930 led to the store’s closure. The building was subsequently used as a general merchandise store and a small plant for the manufacture of paper boxes before becoming vacant for many years.

The building currently sits vacant. Due to its deteriorated condition, the cost of rehabilitation will require significant investment. The City of Maxeys continues to monitor the building’s condition for safety reasons, and it could face demolition if deemed a hazard. 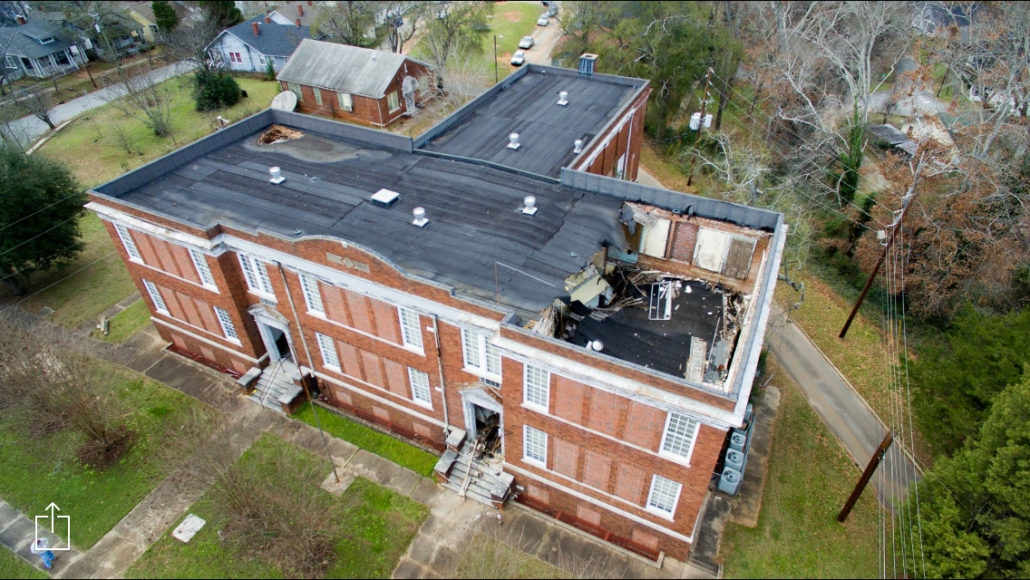 Bibb City Elementary School was constructed in 1915 by the Bibb Manufacturing Company for the children of its employees.

Owned by the Muscogee County Board of Education, Bibb City Elementary is currently vacant and boarded. Part of the roof has collapsed, leaving a significant portion of the interior exposed. According to architects and school system engineers, the building is at risk of full collapse if the roof continues to deteriorate further. Community members and local partner groups are rallying support for an adaptive reuse so that the building can once again serve the community. 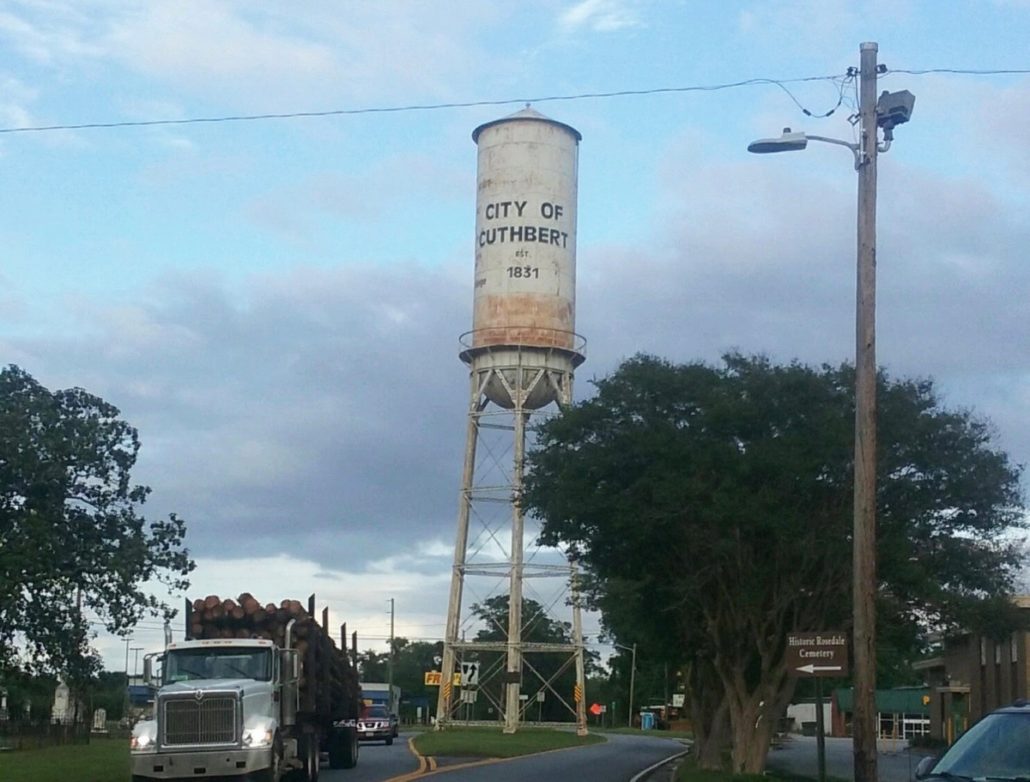 Built in 1895, the Cuthbert Water Tower is the only known water tower in the center of a federal highway. When US Highway 82 came through Cuthbert in the 1940s, the city council informed the federal government that the City of Cuthbert did not have the money to move the water tower, so the federal government ultimately built the highway around it. Although it has not been used as a water tower since the 1970s, it is an iconic symbol for Randolph County.

Owned by the City of Cuthbert, the water tower suffers from a lack of maintenance. In addition to limited funds, the necessary repair and rehabilitation of the structure is made more difficult due to its location in the middle of a federal highway. 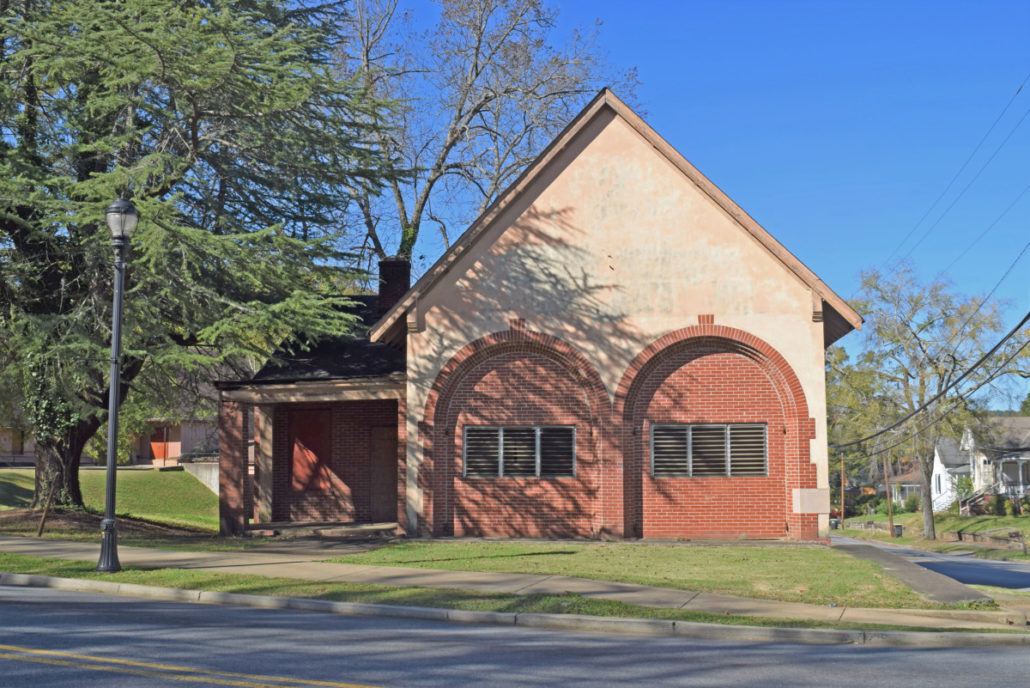 The fire station was gifted to the South Broad Baptist Church after its closing. It is mostly used for storage by the church, who has no long-term plans for the building. Some church leaders have expressed interest in seeing the building preserved, but they don’t have the resources to do so. Maintenance issues are beginning to appear, and there is concern that without attention, it will soon fall into disrepair. 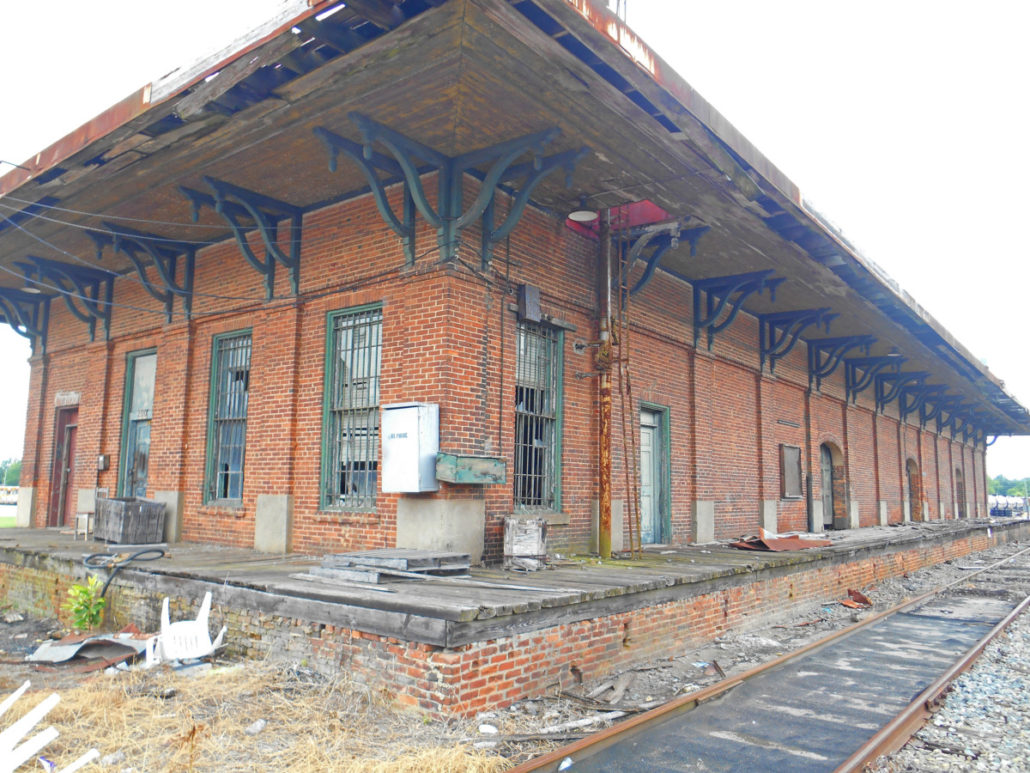 For more than a century, the 1871 Fort Valley Freight Depot served as the key point for shipping and distribution of the South’s industrial and agricultural products. Only ten depots of similar design remain standing in Georgia.

The building is not in use and has suffered neglect. It sits between two active tracks currently used by Norfolk Southern Railroad and the Georgia Southern Railway of Georgia. The railroads have deeded the building to the Fort Valley Downtown Development Authority under the condition that it be relocated; otherwise, it will face demolition. 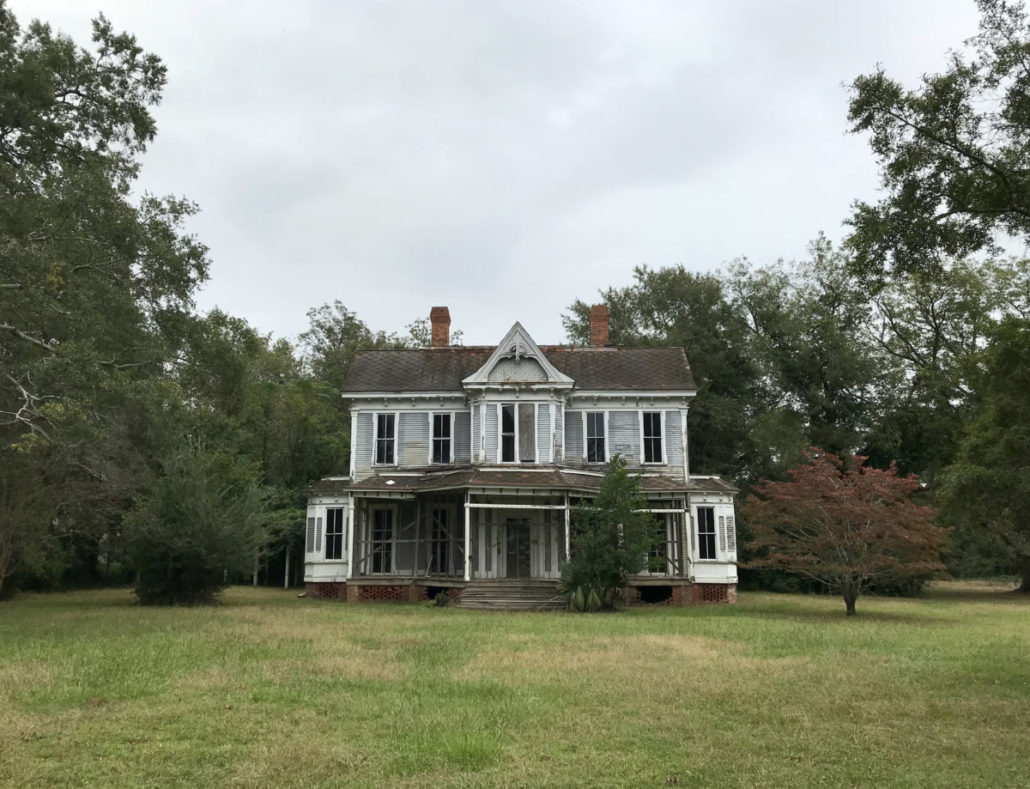 Built in 1883, the Foster-Thomason-Miller House is a major contributing building to Madison’s National Register Historic District and an outstanding example of the Aesthetic Movement in architecture and finishes for Georgia and the South. In 2001, a fire broke out in the back of the house and severely damaged a rear addition. Although it did not spread into the historic structure, the original house suffered significant smoke and water damage.

The property was sold to new owners, but no visible efforts have been undertaken to stabilize or restore the structure. The expansive property is also threatened by proposed insensitive development, with plans to build 37 additional houses on the surrounding eight acres. The Foster-Thomason-Miller house is slated to remain; however, its rehabilitation is not included in the developer’s plan. 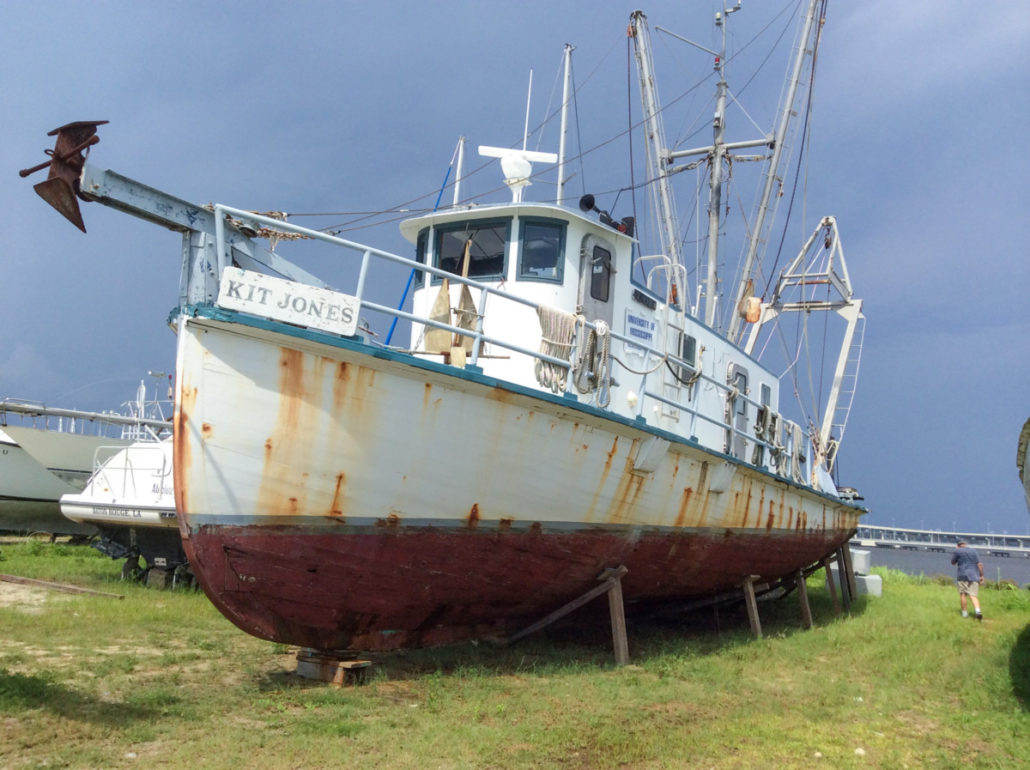 The Kit Jones is a 60-foot wood-hull tugboat built on Sapelo Island in 1938-1939 by island owner and tobacco company heir R.J. Reynolds, Jr. After serving as a U.S. Coast Guard fireboat during World War II, the Kit Jones returned to Reynolds and Sapelo Island, continuing her service as a freight hauler and as a passenger vessel that provided a lifeline to the mainland for the residents of the island. Later the Kit Jones supported a variety of marine research projects for the University of Georgia Marine Institute and University of Mississippi.

In 2013 the Kit Jones was put into drydock in Biloxi, and for many years, faced an uncertain future. The McIntosh Rod & Gun Club, Inc., a quasi-governmental partnership of McIntosh County and private club members, acquired official title to the Kit Jones in 2017 with the intention of returning it to Georgia; however, the vessel will need substantial stabilization work before it can be moved. 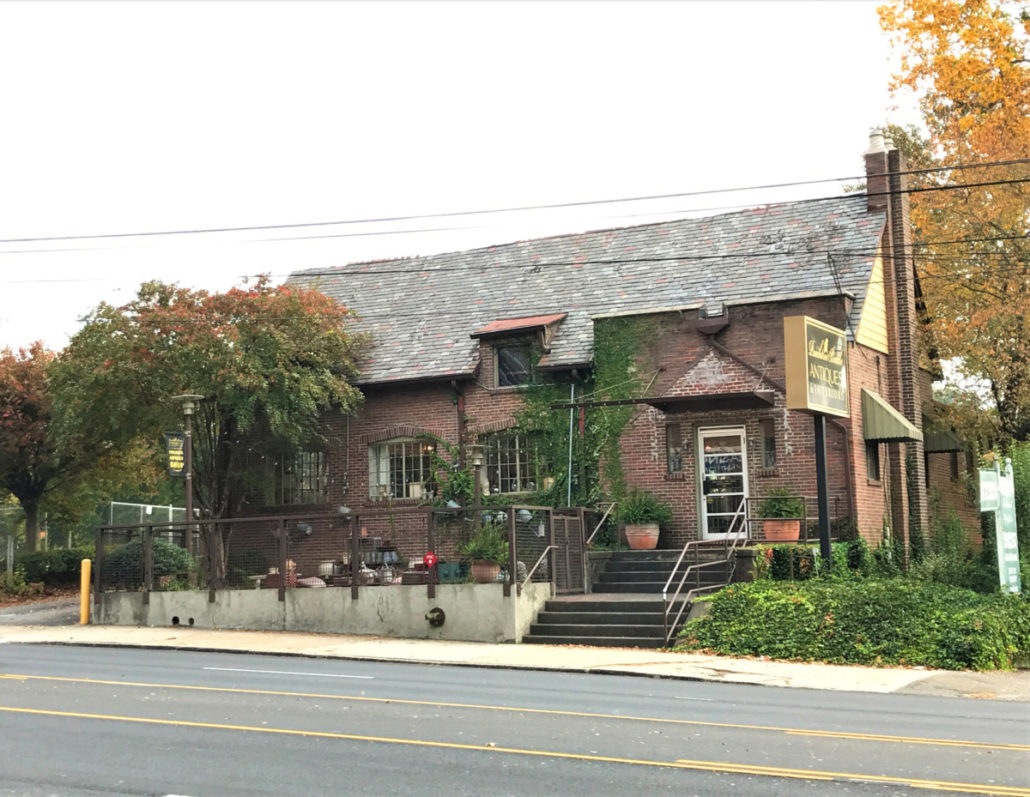 Designed in 1929 by noted Atlanta architects A. Ten Eyck Brown and Alfredo Barili, Jr., the National Library Bindery Company was the Southeast’s first library bindery and is one of the oldest remaining structures on Peachtree Road. Today the building is home to Peachtree Battle Antiques.

The building is threatened by demolition. In 2016, the building’s owner, Branch Properties, received approval for the construction of a new apartment building at the corner of Terrace Drive and Peachtree Road. The plan called for the demolition of several buildings, including the bindery. A demolition permit was issued by the City of Atlanta later that year. While Branch Properties later agreed to save an undetermined amount of the façade, nothing is certain at this point. 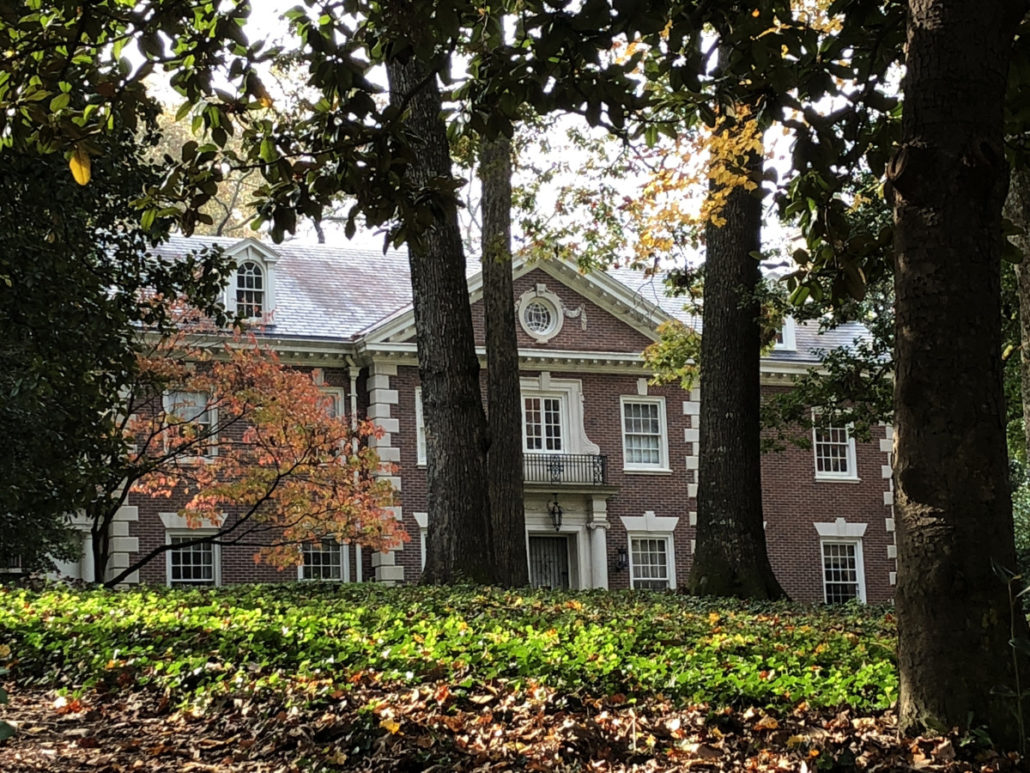 Renowned landscape architect Frederick Law Olmsted, most known for designing NYC’s Central Park, laid out Atlanta’s Druid Hills neighborhood and the adjoining linear park at the turn of the 20th century. Although the houses in Atlanta’s Druid Hills Historic District are protected because they are in a locally designated landmark district, Olmsted’s original plan is threatened with being subdivided. As Olmsted’s last major suburb to retain its original lot configurations and open spaces, Druid Hills has been called “the finest example of late 19th and early 20th century comprehensive planning and development in the Atlanta area, and one of the finest period suburbs in the Southeast” by the U.S. Department of the Interior.

Two historic properties specifically highlight current threats to the original Olmsted plan, which features spacious, deep lots designed around the surrounding landscape. These two properties are threatened by plans to subdivide their acreage to build several smaller homes. One of the estates, Pinebloom, was designed by noted architect Walter T. Downing in 1913 for Preston Stanley Arkwright, a former president of the Georgia Power Company. The second property, the Pattillo-Woolford House, was designed by Pringle and Smith in 1922 for Samuel Pattillo and later sold to Thomas Guy Woolford, who co-founded the Retail Credit Company, now Equifax.

The structures themselves are slated to remain though they would be reconfigured into condominiums. Subdividing these large lots could significantly impact the historic character of the neighborhood and linear park and may serve as a precedent for similar development. 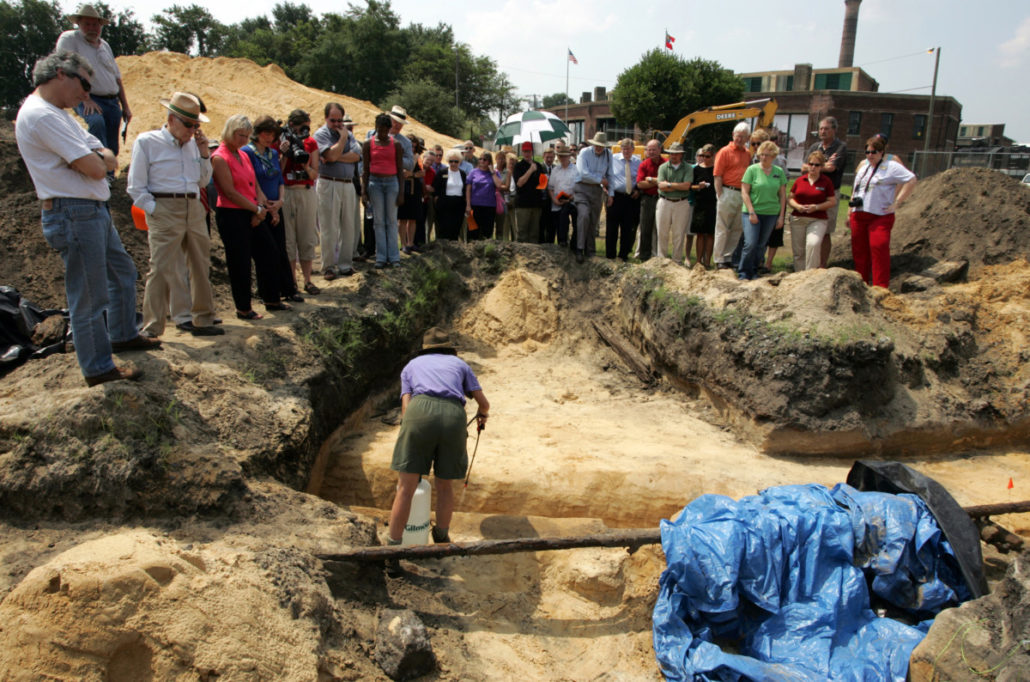