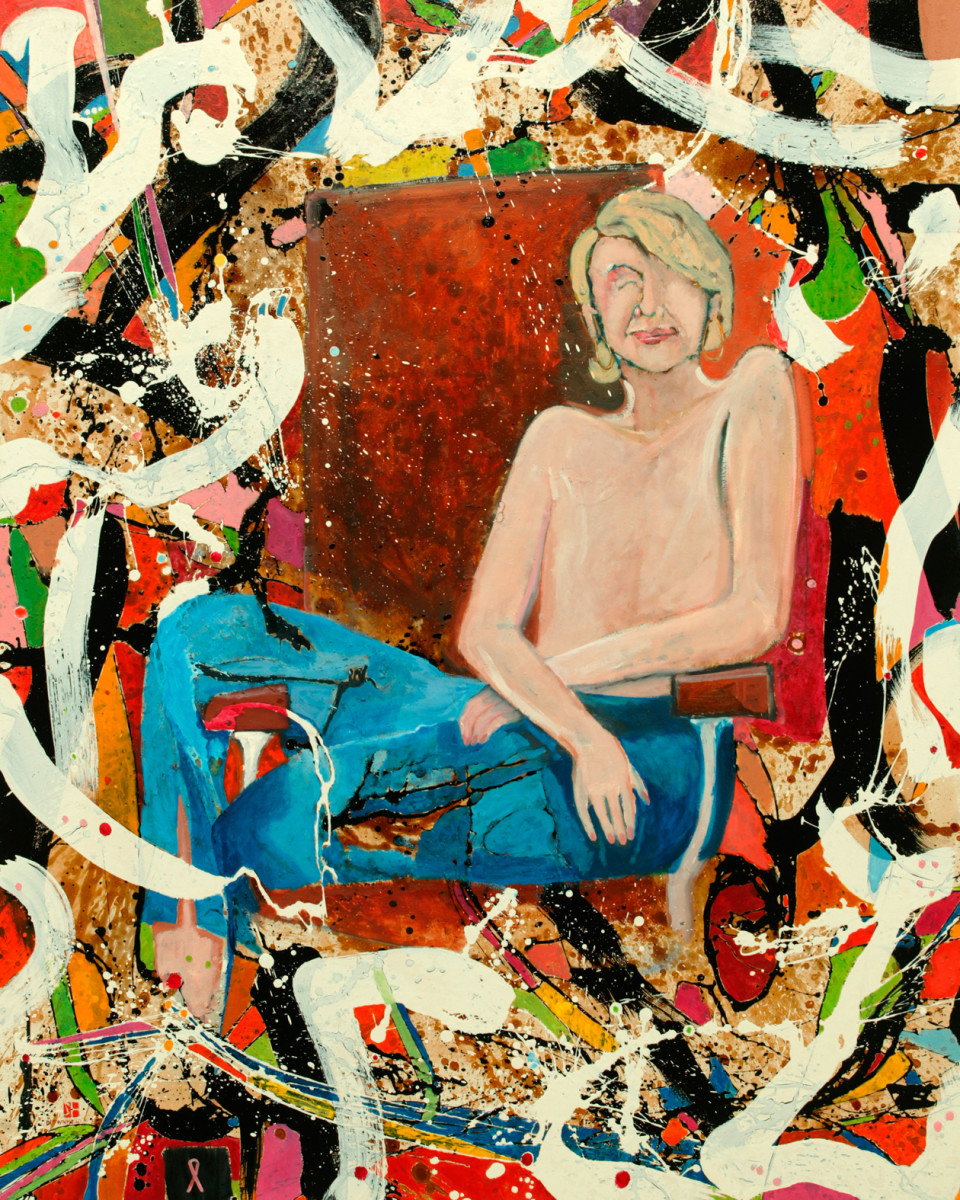 This week guest contributor Eve Hoffman reveals her role in helping to tell the stories of those affected by breast cancer as part of the “Celebration of Healing” project with artist Sal Brownfield. 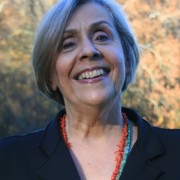 I leaned against a wall in Sal Brownfield’s art studio (see last week’s article, part one of “Art and Healing”), camera in hand, a “Celebration of Healing” model 20 feet away, holding the formal pink dress she’d worn to the first Pink Tie Ball after her breast cancer surgery. She waited patiently as Sal paced, picked up and put down anything that could move — paintbrushes, rags, lights, chairs. Every so often, he’d glance at the model and toss a brush nervously up and down in the air.

Suddenly, he dropped a five-foot-by-four-foot canvas on the floor, propped one end up a few inches and asked the model if she could stand still holding the dress up against the running clothes she was wearing. He bent over the canvas, feet spread wide. In large sweeps of his shoulders, arms, hands, whole body, he laid down the first long strokes of her shape with a wide brush of black shellac. It was intense. I was a voyeur. I slipped out without speaking. 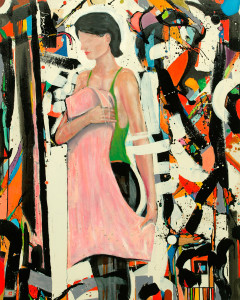 A few weeks later, Sal said to me, “There is more here than I can paint. Will you interview the models and write their breast cancer stories?”

At the time of diagnosis, the “Celebration” models ranged in age from 26 to 92 and had lived in 18 states and three countries. Some of their stories began decades before; others were just completing treatment. The models included a broad demographic of religion, national origin, sexual orientation, and education as well as vocations and interests — a dancer, commercial real estate broker, chiropractic assistant, PTA president, artists’ residency director, provider of alternative HIV/AIDS services, environmental justice director, public health nurse, marathon runner.

Most models began our conversation with, “You know, I really don’t have a story.” Once we got we got past that, the stories unfolded. The roller coaster of fear, mortality, anger. “There was a war going on inside my body, and I wasn’t a participant.” Disfigurement, lack of control, hair loss. “What I didn’t anticipate was how losing my pubic hair would make me feel like a very little girl. When it grew back, I began to feel like a woman again.” A cascade of exhaustion, depression, frustration. “I belong to a group of women who are more willing to talk about their uterus than about breast cancer.” Myths to dispel. “No need to worry, Asians don’t get cancer.” “Do you think you got breast cancer because you got hit in the chest with a tennis ball?” Uncertainty about motherhood, sexuality, sensuality, femininity, fertility, husbands, boyfriends. Husbands attending every chemo session; a husband walking out. Certain doctors and family members of a legally blind and divorced model advised her that she didn’t need reconstruction. Her response: “Blind people do have sex.” 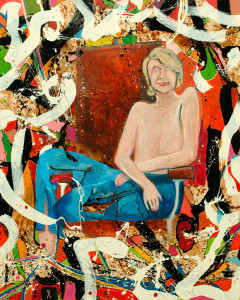 Models told stories of being overwhelmed by the kindness and generosity of family as well as strangers, the power of community and the unexpected ways these manifest themselves. “Dinner guests took turns wearing my wig. The laughter was healing!” Another told how “priests created a space in the friary, where no women had been,” to take care of her after she was diagnosed with breast cancer and alone. Gutters were cleaned, a hat was knitted by a teacher with a button that had belonged to the teacher’s grandmother, freezers were filled with gourmet meals, spring gardens were planted.

Our conversations were not limited to breast cancer. One model had just lost her husband after a long illness. Another had a son overseas in the Marines and didn’t hear from him very often. Another pondered if she would continue in her previous profession when she was strong enough to return to work. One talked about her passion for digging in the dirt and for pickles and olives. Another discussed hitting a deer while driving through Alabama.

“Celebration” models talked of the difficulty of learning to slow down all the parts of their lives, of giving themselves permission to feel depleted, of a new brightness to morning sunshine.

A woman too thin for reconstructive surgery told me, “I have a chest like a wren. When I hug a man I can feel his heart beat.” I listened to stories of transition from wellness to shock, from fear to managing disease, from new definitions of wellness to celebrating life — a process, I learned, that was irregular, awkward, both mundane and soul-numbing, some days easier than others, never a singular event.

I came to appreciate the extent to which breast cancer patients are perceived differently after diagnosis — both their own sense of self as well as how they are perceived by others. My job was to let each voice be heard, not to try and interpret.

Editor’s note: “A Celebration of Healing” will be on display at the Aurora Theatre in Lawrenceville, January 14-February 7, in conjunction with the Pulitzer Prize-winning play Wit by Margaret Edson. Through a partnership with Georgia Humanities, the Aurora event is part of a Pulitzer Centennial celebration. Sal Brownfield and Eve Hoffman will sign copies of their book A Celebration of Healing after the matinee and before the evening performance of the play on January 23 and on February 6. Click here for tickets and showtimes.

Eve Hoffman (www.evehoffman.com) began writing poetry a dozen years ago. She was named a “Remarkable Woman” by her alma mater, Smith College, and one of the “100 Most Influential Georgians” by Georgia Trend. Her first volume of poetry, Red Clay, is out of print. She is currently completing a new manuscript of poetry written through the lens of a white, southern, Jewish woman. To see more of Brownfield’s “Celebration” portraits, go to www.celebrationofhealing.com.